Chant 4 Change Prior to Presidential Elections

Many Songs, One Voice

Last October marked the 20th anniversary of the Million Man March. The event, which took place at the Mall in Washington, D.C., was inspired to bring about spiritual renewal and empowerment. Organized by the Nation of Islam, an estimated 1.7 million Black men registered to vote as a result of the movement and messages.

This October 8, from 1 to 11 p.m., 30 days prior to what has been called the most important presidential election, another faith-based group is rallying at the nation’s capital, with satellite activities in other areas including San Antonio (read on). Chant 4 Change is non-denominational and non-partisan. The group is uniting voices from all cultures and religions to sing and speak out for the future of our nation.

Unity in Diversity at Chant 4 Change 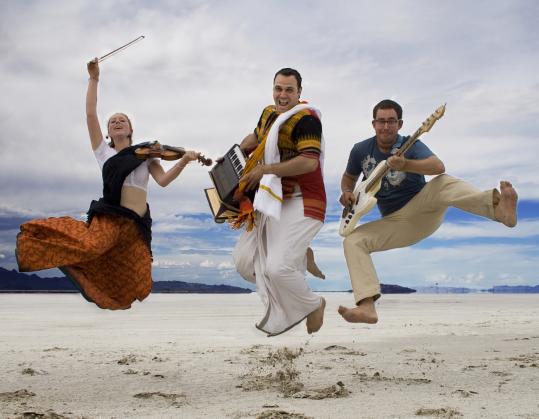 Co-founder, Gaura Vani, wants to channel positive energy and musical vibrations to rewrite the narrative and steer people to higher consciousness. “Like ringing alarms. The voice of the soul, lifted in song, can lift the tide. And with it all ships,” the poet/kirtaneer said as he invited yogis at Bhakti Fest in Chicago to join his wave

Chant 4 Change’s seed was the enthusiasm for change in the days leading up to President Obama’s first inauguration.

“There was this movement in D.C.,” says Visvambhar (Vish) Sheth, a Chant 4 Change team member, and Gaura Vani’s recording partner in the Juggernauts and the Hanumen. “There were all these galas, but nothing for conscious communities. This year, we decided to hold Chant 4 Change 30 days before the elections, to empower the people. We all knew it was going to be a dirty fight. You can come from whatever your political inclination, or religious belief, or lack of belief. It’s about coming together and making a statement.”

Eight years ago, the venue was a church. This year, Change 4 Change will be held at the Lincoln Memorial.

“Just the spot itself has so much historical influence. It feels very synchronistic,” says Vish about the monument from which Dr. King gave his indelible “I Have a Dream” speech.

Both Martin Luther King and Mahatma Gandhi were conveyors of dreams. Dreams of peace, respect for people from different socio-economic backgrounds, races, and religions. Those messages seemed to have an immense impact, yet, lately, there has been a shift. A regression.  Intolerance and prejudice are creeping back through the mud.

Vish, who studied religion in college, says music is a great platform to uplift and connect. Chant 4 Change unites artists and leaders from different world views and religions for ten hours, non-stop.

“We all have our call for peace. It’s the way to listen to each other. Hear each other,” he says.

Gaura Vani and Vish will lead call and response chanting (Kirtan) pulling from their own diverse musical inventory. Their repertoire runs the gamut from Persian poetry, a Bosnian melody, Balinese and Mongolian chants, to reggae, samba, Americana, and Negro spirituals.  Interfused with the wide variety of beats and languages, they belt out Indian bhajans and ragas. Both Vish and Gaura Vani are well versed in Sanskrit and play harmonium and mridanga (Indian clay drum).

“More and more, this group is drinking from the wells of all the different traditions that praise God in their own tongues,” says Vish.

Jai Uttal and MC Yogi, both high-profile musicians in the yoga communities, will fly in from California.  MC Yogi may be best known for his music video building off images and words from Gandhi’s “Be The Change” speech. Other Kirtan favorites include The Kirtan Rabbi, David Newman, and Ajeet Kaur. Also flying in from the West Coast is guitarist Mikey Pauker, who writes in English, Hebrew, and Sanskrit. Returning from a world tour will be Tina Malia, who has performed with India.Arie, Kenny Loggins, and Bonnie Raitt.

Bridging to other cultural sounds are traditional Sufi musicians, Cherokee musician and healer Yona French Hawk, a trio led by sarod virtuoso Amjad Ali Khan and Sweet Honey in the Rock, a gospel ensemble that has advocated for social justice for 40 years.

Also spreading messages of peace and unity will be religious and community leaders. An imam, Buddhist teacher, law enforcement, and Black Lives Matter representatives will give inspirational messages.  Radhanath Swami, author of “The Journey Home” and “The Journey Within,” will share words of wisdom about living an enlightened life. The boy from the Chicago suburbs who became a Vaishnava monk, the spiritual leader has written about how the false ego creates deception and misery.

“People acting under the false ego profoundly affect the people around them,” he says. “They divide us…they allow some of us to assume that we are more important than the rest of us…it leads to the desire to dominate and exploit others, and it can find reasons to justify almost anything.”

Vish says all world traditions basically encourage people to give up ego. Love for a higher being, or one’s tribe, is in every tradition. “The false ego is when you’re not willing to listen to anyone else. This event can really bring people to a place of listening to each other and put the false identity aside. We want everyone to come as they are. Hindu. Jew. Christian. Non-believer. When you come together and chant, you are with everyone.  It’s serving a purpose that’s much higher than just myself.”

Chant 4 Change is about dialogue. The goal is to “bring all the community together and chant in their own tongues. We are afraid of each other because we don’t listen to each other. Communication is the key to understanding. What better way than music, which crosses borders, especially sacred music, coming from that place of commonalities.”

Gaura Vani and Vish are great ambassadors for this movement. They are both American-born, with one foot deeply rooted in this culture, and another in the heritage, songs, and traditions of India and the Vaishnava learnings. Their efforts to improve this nation emanate from their hearts. Their vehicles: music and words.

“Kirtan is chanting God’s name, from any tradition.  How purifying it is. Especially when sung in community. Both Gaura Vani and I grew up on the streets. Singing. Once on the subway in Boston, someone wrote on a piece of paper ‘get a life.’ This was all I know (singing). It’s who we are.  It inspires us. To hear people chant and praise God in their own tradition and language … that’s the beauty of Kirtan. We have so many names for the divine being in Sanskrit, but even more in all other traditions of the world.”

Get Involved with Chant 4 Change

Chant 4 Change is a grassroots volunteer-based rally cry. “We feel that the music and the chanting will really uplift the atmosphere, especially in the heart of this country,” states Vish. Buses of people from across the country will convene in D.C.  For those not able to get to D.C., they can tune in via live stream, hold local watch parties, or host local Chant 4 Change events.

San Antonio will host its own event on Saturday, October 8 at The Union Yoga and Strength in at Northwoods Shopping Center, 18130 US-281.

Advaita Acharya Das, one of the local organizers, says, “This is an effort to raise consciousness with the effective way of Kirtan yoga, with no spectators — all participants. Let’s bring our voices as one in the most universal language, the language of the heart, or bhakti. No living entity is a stranger to affection and devotion. The Kirtan experience is home to all, delivering exactly the deepest sense of nurturing connection with all living. Kind of important right before this election of 2016, don’t you think?”

For San Antonio updates, visit my Facebook page. For more on the overall initiative, go to www.chant4change.com.