An American Swami: And My Journey to His Home

There may be a thousand people crammed in a large temple hall. If this were the U.S., it would likely be against the fire code. But we are in Mumbai, India. With 26,000 people per square kilometer. This is an oasis of spirituality. A temple filled with love, gratitude, and flowers. A golden altar houses glorious deities, whose dressings and adornments change, daily. Lavish paintings and tapestries line the walls and ceilings. Many correlate to passages in the ancient scriptures. Gold-plated carvings, as intricate as the Italian Renaissance palaces, grace the room. All eyes turn to the swami. An American Swami.

An Oasis of Peace and Love Built by an American Swami

This is a Krishna temple, filled with Indian men. Most are dressed in white. There are some tangerine-robed brahmacharyas. Every now and then, you spot someone in Western dress. One middle-aged gentleman sports an H&M bag.

Despite the many men here, this is definitely a safe place for women of all ages. From grannies to toddlers. Most wear saris. To a lesser extent, younger women wear traditional long dress shirts over baggy pants or leggings. The salwar kameez. 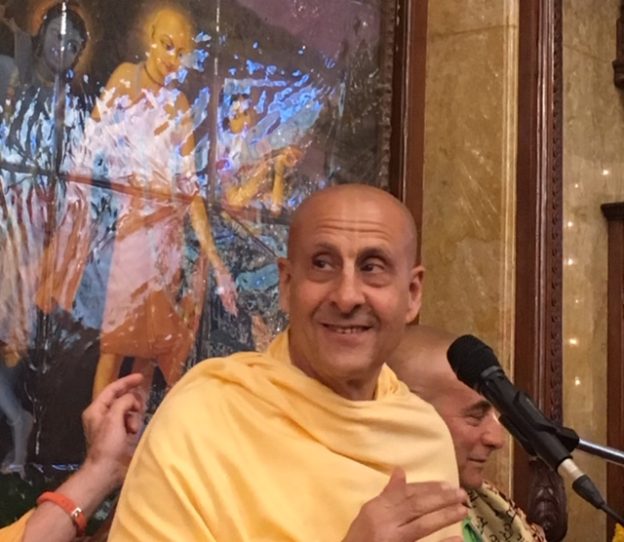 Three video cameras point at the American Swami. When he enters, many prostrate themselves in front of him as a sign of respect. Obeisances. The humble swami begins with Sanskrit chants. Then, he gives a lecture on the “Srimad Bhagavatan,” in the lingua franca of English. He drops in Sanskrit words frequently. But, his English reflects his American mid-western roots. The packed room of devotees applauds the swami generously when he’s done.

At first glance, the man in charge here appears to be an Indian man, in his element. Indeed, he’s in his element. But, he hails from the suburbs of Chicago (like me). Furthermore, the American Swami is of Jewish ancestry (as am I). Thousands of devotees lovingly call this man Radhanath Swami.

Not unlike many of his Vietnam-war generation, he was disenchanted. At age 18, he hitchhiked throughout Europe and Asia. With little more than a harmonica in his pocket. His mission: find truth. Destination: India. He met many a guru before he found the real deal. Srila Prabhupada. That was almost 50 years ago. Now, Radhanath Swami is the sharer of truth. He has written a best-selling book, turned into a screenplay. More importantly, the American Swami has made an indelible mark in India. In the spiritual community and beyond.

This American Swami fostered a long list of charitable initiatives. There’s the Bhaktivedanta Hospital in Vrindavan. Sandipani Muni school for 1,500 underprivileged girls in Vrindavan. Mobile eye and dental clinics. Plus, a program serving 1.3 million lunches a day in India. Additionally, he established an award-winning eco-village. That initiative includes a rural women’s empowerment program, and systems to boost agricultural outcomes for 900 previously near-starving farmers.

Today, in Mumbai, however, the attention is all focused on the beauty of the temple adorned in flowers of all different hues. In the morning, women sit on the floor in a large room. They form small groups surrounding baskets. We pluck petals off the flowers. One group is working on marigold-colored flowers. Another, crimson. Others, garden-fresh white blossoms. In my group, I am the only foreigner. We are young and old. Of diverse socio-economic strata. We have many different mother tongues (there are 22 “constitutional” languages in India). 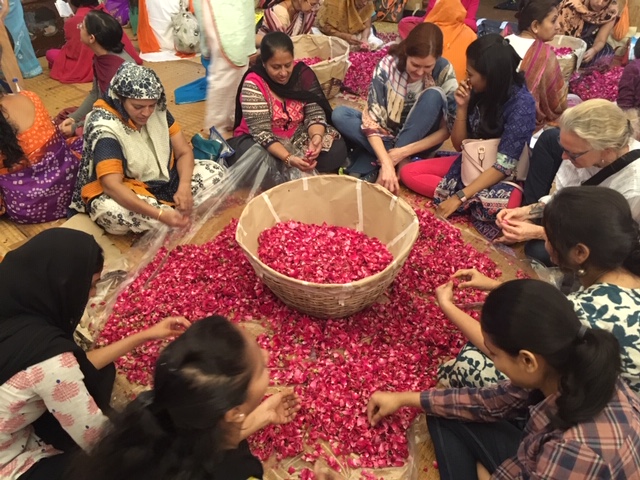 In the main sanctuary, there is more diversity. The room is about the size of a basketball court, including the sidelines. Here, are the men. Children and some women, too. All are one. All focus on the same repetitive task. Plucking petals. Periodically, a few men with tilak on their foreheads bring out bushels of new, intact, flowers, and they pick up the color-separated baskets of soft feathery petals.

The plucking, in itself, is a bit of a meditation. But, the reason behind this is not revealed until Radhanath Swami returns to his microphone in the evening. In the meantime, we all dutifully perform the petal plucking.

Our senses are satiated. We are surrounded by the sweet aroma of the flowers. The touch of the soft petals, and sturdier stems, against our fingers. And, a radiant array of colors surrounds us. In all, more than 2,300 pounds of flowers. Marigolds. Chrysanthemums. Roses from Vrindavan. Jasmines from Coimbatore.

A Ton of Flowers in a Sanctuary

This is the Mumbai Flower Festival. Also the brainchild of the American-born swami.

In the evening ceremony, devotees squeeze into the sanctuary. We line up at least an hour in advance to get prime spots on the floor, eye to eye with Radhanath Swami. Everyone sits knee to knee and shoulder to shoulder. We are the lucky ones. The overflow watches from a large screen in the patio, below. Around the world, others tune in on a live stream.

The evening includes chanting led by Radhanath Swami. Behind me, are recording artists Gaura Vani and Jahnavi Harrison. They provide beautiful subtle background instrumentation and vocals. Periodically, we all join in the chanting.

Then, it’s time for the reveal. What, in fact, are we all doing here?

Radhanath Swami explains that we, humans, are like flowers. All different colors. Some from Mumbai. Others from Southern India. Still others, from the U.S., Latin America, Europe, Asia, and Africa. We are of different sizes, scents, and senses. Alone, or with our own, we are beautiful. But, when we are all together, mixed like potpourri, it’s an amazing sight. And feeling. Incredible touch on our hair…arms…clothing. There is, perhaps, nothing more beautiful than this. Unity in diversity. Beauty in diversity. Power in diversity.

At this point, from the altar, men overturn the individual oversized baskets of petals onto the deities. First, they are bathed in white petals. Then, yellow petals. Next, purple. One color, after another, we see the layers floating on top of the deities. After about two or three dozen huge baskets of uni-colored petals raining onto the deities, we see a slight meshing of colors. Subtle dark red peeking through the oranges. Flecks of white or yellow, underneath or between.

The crowd is in ecstasy. But, the high point is yet to come.

Soon, we see the confetti of multi-colored petals. The deities themselves are completely hidden by all the beautiful colored flower parts. Petals form mountains atop the deities. Mountains keep growing, like layers of snow. A landslide is pending. There are so many layers upon layers of different colored flowers. Gold upon orange. Scarlet upon vermillion. Color-less among the vivid.

When there are no more petals to pour onto the Mount Everest-looking deities, the fun begins. Think Mardi Gras on Bourbon Street. Petals. Not beads. Devotion and spirituality. Not spirits.

The mounds of delicate flowers are strewn upon the gazers. We are covered with orange. Pink. White. So many beautiful colors. All together. The confetti of petals. The diversity of our world. Of individuals. When all the petals make their way into the central area, atop the hundreds of fellow worshipers, all become kids. Spry folks bend down and scoop up the piles of petals by our feet. We let the petals fall like rain on those around us. Friends toss handfuls on each others’ heads. Or lightly spray their faces with the multi-colored blessed petals.

“The flower festival is like being on drugs in the 60s. But you’re not,” says Gaura Vani, the musician. In fact, Gaura Vani left the Hollywood scene to re-dedicate his life to Radhanath Swami and the teachings of Srila Prabhupada.

The Petals Remain with us Forever 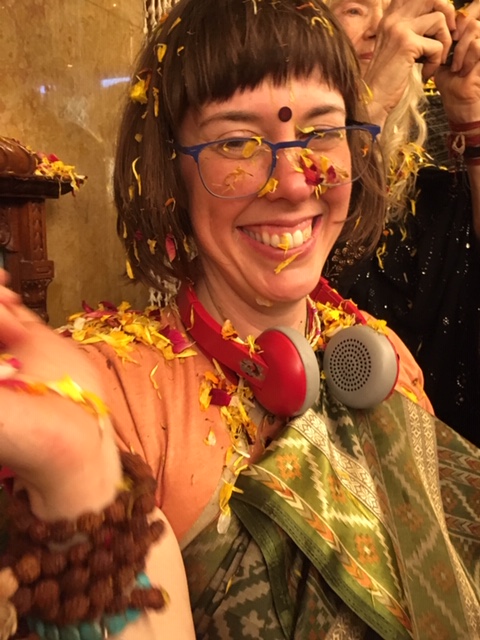 Five months later, Mark, who works in the financial industry in Chicago, says the petals are still with him. “The pockets of my kurta have an unlimited supply of potpourri. It’s magical.” Lauren, a comedian living in Los Angeles, too, carries the remnants with her nearly half a year later. “Just found ANOTHER flower petal from Mumbai in my purse,” she notes with a laugh.

Just as Mardi Gras may be unforgettable to many, the Mumbai Flower Festival, conceived by a Jewish-turned-Vaishnava man who threw away his blue jeans in favor of an orange robe, is like nothing else. We are all in a state of light-headedness. Bliss. Devotion. Awe. Despite our countries of origin, race, religion, we are flying high. Equal. Respecting one another. And, as is the norm for followers of the ISKCON traditions, drug- and alcohol-free.

India is a land of spirituality. Siddharta Gautama, the buddha, left India for Asia where he was (and is) considered a Supreme Being. Likewise, many yogis left India to create large followings in the West. Srila Prabhupada, left India, with only a few dollars in his pocket, and created an enormous legacy for spirituality, around the world. But, sometimes it needs a boon in the west to gain more momentum in the homeland. Srila Prabhupada’s work in other lands has only strengthened the following in India. Likewise, it took a kid from Chicago to bring back, replant and nourish the 5000-year-old learnings from India.

And, thanks to modern-day technology, everyone can connect in the learnings and experiences.