Most people think of yoga as a very private and quiet activity. Yogis typically perform their sequence of postures in tranquility, behind closed doors. That won’t be the case March 14-16 at the 2014 USA Yoga National Championship, when more than 200 highly skilled yogis representing 36 states will gather at San Antonio’s historic Aztec theater to demonstrate their advanced yoga skills and postures. It will be San Antonio’s first time to host the national yoga championship.

Yoga is an Art — and So Much More

Watching skilled advanced yogis move into an asana (posture) is like watching a ballet or gymnasts at the Olympics.

Gianna Purcell is a perfect example. Today she is the top female contender at the championship, and in 2012 she was named the Texas Regional Asana champion. Her postures are among the most beautiful to watch, but her path to yoga was a rocky one. After a number of childhood injuries and hours on her feet as a hairstylist, her joints and back ached with severe pain. A client suggested she try yoga. The results were transformational. Her back pain disappeared within the first month, and within a year she was off anti-depressants and ADHD medication.

The national championship event traditionally draws a crowd of more than 1,000 people, with a total audience of 30,000 via live streaming. Tickets are modestly priced to allow as many people as possible to appreciate the beauty and the gift of the participating yogis.

Watching the competitors who have qualified for the nationals, one would think that they’ve dedicated their entire lives to yoga. Yet some have only been practicing only a few years, and like Purcell, many have traveled a rocky road to the national yoga stage. 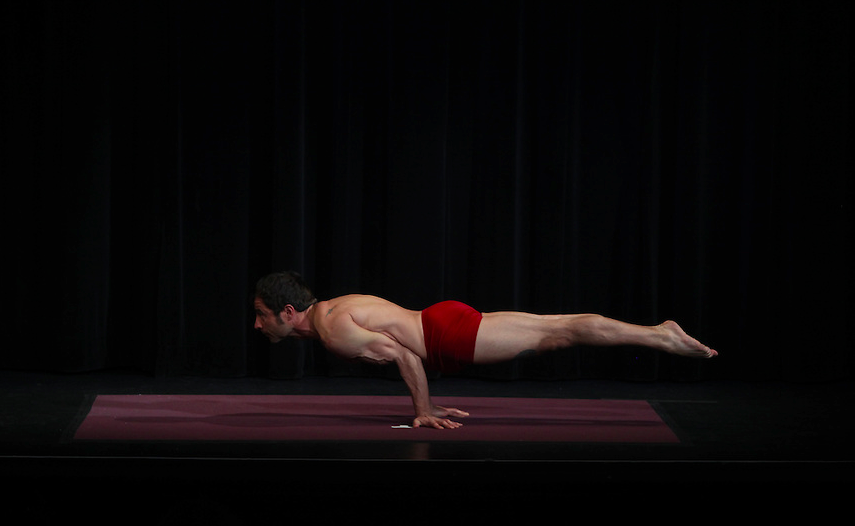 Shane Thornton swapped his bar stool for a yoga mat

Thornton, who’ll be competing at the national championship, never thought he’d live past 30. Nor did he care. He pretty much spent all his free time at a bar in Bozeman, Montana. He downed beer like water. He drank all day, every day.  He got into countless bar fights, made numerous bad decisions, and never cared much about his health or wellbeing.

One day he woke up from the haze and realized there was life beyond a stupor.

Go Beyond Your Comfort Zone

Thornton made his best decision when he gave yoga a try at the urging of a friend. It took a lot of convincing. Shane was a wrestler. He was a macho man, and yoga was nowhere near his comfort zone.

“The yoga kicked my butt, both physically and mentally. That was exactly what I needed at the time,” Thornton says. “Over the months to follow, I replaced my time at the bar with the yoga studio. Little by little, I watched myself transform into a completely new person. Now, I can do things with my body that I never even imagined in my past life.”

Within just one year of practicing yoga, Thornton knew this was the right road for him. Although still a yoga newbie, he invested in himself, and others, by becoming a Bikram Yoga instructor.

Four years later, he teaches at The Union in San Antonio, has participated in the USA Yoga Federation Regional Championships, and hasn’t touched a drop of liquor.

Thornton’s story, and that of so many others, illustrates that yoga is a path to self-realization, enlightenment, better health, or emotional well-being. Regardless of whether one can put their foot behind their head or not. it’s not about the destination, but about the journey.

For information about the USA Yoga National Championship, or advance tickets, visit www.usayoga.org or check out the competitors at facebook.com/usayoga usayoga.org and twitter.com/usayoga

USA Yoga is a non-profit organization formed for the purpose of developing and promoting Yoga Asana as a sport.