The Best Form of Intoxication is Healthy and Free 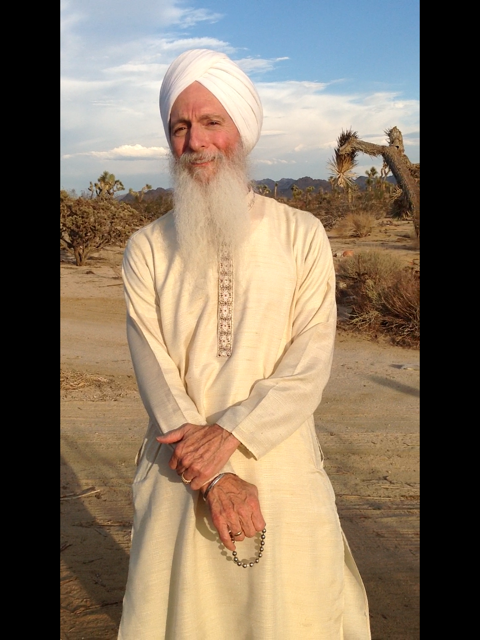 When The Beatles made their debut on the Ed Sullivan Show, in 1964, it changed the lives of an entire generation. As the Beatles found enlightenment in India, the search for self-realization and yogic philosophies saved many young people from digging themselves deeper into a dark world of sex, drugs, and rock and roll.

Back in the ‘60s, Michael Gonick was an acid rocker and devout fan of the Grateful Dead until he had a personal transformation. He became a devotee of Yogi Bhajan, the man who blazed a trail for Kundalini yoga and became the Sikh leader in the Western Hemisphere.

Gonick changed his name to GuruGanesha Singh, and his music evolved as he embraced the Yogi’s teachings of Healthy, Happy, and Holy. Now, GuruGanesha tours the world with his style of rock-infused kirtan music. The GuruGanesha Band was part of a national tour, hitting venues in Texas, Illinois, California, and Florida, among others, as part of MantraFest 2013.

GuruGanesha owned his first guitar at the age of eight. His uncle was a studio guitarist with the “Ed Sullivan Show.” He had 40-50 guitars hanging in the basement and offered the young boy to pick his favorite. “One spoke to me. It was the most expensive one,” GuruGanesha laughs. “There was a destiny to play the guitar.” His musical ties deepened as a 19-year-old walking 22 miles in the rain to get to Woodstock. “We thought we were freaks till we saw the others,” he comments about that unforgettable musical era.

He eventually was moved to a more spiritual life. “There was a voice deep inside saying, ‘find an alternative way to be uplifted. When I heard the Beatles’ “Norwegian Wood” with the sitar, I had chills.” In college, he began to delve into Indian music and started praying for a spiritual guide. Then he saw a flyer with Yogi Bhajan’s image and instantly felt in his DNA that was to be his path. He explains his fortuitous encounters with the Sikhs, Kundalini, and chanting kirtan music. “A tall man with a beard and a turban began to sing ‘Guru Ram Das.’  It tore at my heart center, and tears started pouring like a flood. My heart chakra opened. And that night we went to an ashram.”

They told him to expect a wake-up call at 3.  He thought that was normal. As a rocker, he usually went to bed after sunrise and woke up mid-afternoon.  He didn’t realize the wake-up call was 3 a.m. Not 3 p.m. Apparently, the sleep hours didn’t turn him away. At age 22, he returned to his childhood home wearing an orange turban.

“The Sikh path is all about oneness.  This is what I believe in my core, and that’s what attracted me to the path,” he explains of his following the teachings of Yogi Bhajan. “The beauty of Kundalini Yoga is it delivers a powerful experience.  It’s a lifestyle. Kundalini is strenuous and intense.  People are under pressure. All this information…bad news, leads to no trust and fear. Kundalini connects you with a trust way beyond intellect. The fear melts away and you feel a divine electric current.” That current is also what flows when the GuruGanesha band is on stage leading call and response chanting. “Our music is a co-formance,” GuruGanesha adds. “The music the audience radiates is magical. We play similar to the Grateful Dead. Based on the energy, real magic happens.”

Another ingredient to the magic is GuruGanesha’s lead vocalist, Paloma Devi. “The universe delivered Paloma to us at summer solstice a few years ago,” says GuruGanesha. “I was walking around after midnight, and I heard beautiful music and drumming.  I was struck by the passion, beauty, and depth of her voice.  She said, ‘get your guitar’ and we jammed as kindred musical spirits.” Paloma sings in Spanish, Sanskrit, and Gurmukhi, and the band plays devotional music with traditional East Indian instruments infused with reggae, bluegrass, and rock electric and acoustic guitars.