The Birth of Bhakti Fest: Spirituality at Woodstock

It was 1969. There were 500,000 gathered in Woodstock as Sri Swami Satchidananda gave opening remarks and prayers. “America is helping everybody in the material field, but the time has come for America to help the whole world with spirituality also.”

Swami Satchidananda’s inclusion at Woodstock was the brainchild of Sridhar Silberfein, who suggested spirituality was missing from the original Woodstock lineup. He also suggested taking this concept a bit further. Why couldn’t spirituality be the focus of a mass festival? The Swami agreed, and Sridhar recognized he had to make it happen.

After raising four children, establishing the first natural foods store in the LA area, and making tea tree oil commonplace in the States, Sridhar set out to design a Woodstock for Yogis. He created a spirituality-based festival where the focus was chanting the names of the divine and bringing higher consciousness to the masses.

In 2009, Sridhar opened the gates to the Joshua Tree Retreat Center for the first Bhakti Fest. This September 12-17, two of the artists that have graced the festival each year, are once again taking center stage.

Jai Uttal had been leading weeklong Kirtan Camps for six years when Sridhar first told him about his idea for Bhakti Fest. The musician with a traditional rock background, infused with Indian and Brazilian instruments and beats said, “Yes, it’s the perfect time!”

For those unfamiliar with Bhakti (devotion) and kirtan (devotional chanting), Jai tells why it’s such a powerful practice. “These ancient chants contain a transformative power and healing energy. By singing these prayers we join a stream of consciousness and devotion that has been flowing for centuries.”

Jai, who has been singing kirtan for many decades, felt his students were longing for a bigger-scale gathering full of spirituality and sacred chants.

“The community of ‘devotees’ has grown and expanded like ripples in a lake. The more we toss in our tiny pebbles of love, the greater are the waves of compassion and caring.”

This year, as in all the prior years, Jai will be a prime-time performer on the main stage. Additionally, his yogi/dancer wife, Nubia Teixeira, will lead four different workshops including a session to empower women to heal the world. Like Jai, Nubia has been following the path of yoga and spirituality for 30 years.

Jai always gives a great show, with his high energy, and deep devotion. Read about one of Jai’s past special events in Austin.

Donna De Lory’s blend of world music, mantras, and electronica has been a favorite at Bhakti Fest, since 2009. She made her way to the first Bhakti celebration, after touring the world for 20 years as a singer and dancer with Madonna.

A Valley girl, her mom died of breast cancer when she was just 16. That event reshaped her life in many ways. She moved south to live with her dad, a Latin bandleader who was into health foods and Eastern religions. She took up meditation and worked at a vegetarian restaurant. She read a book by OSHO and made gospel music. All in the land of country music. Nashville, Tennessee.

As a young adult, she moved back to LA and eventually landed what many would have considered the ultimate job. Part of Madonna’s crew. Throughout those years, the sacred vibes and sounds of devotional music never escaped her. About the time that the west coast yoga culture was taking off, she had two children, left the “Material Girl” circuit, and recorded her first yoga CD, “The Lover and The Beloved.”

The arrival of her children, and Bhakti Fest, cemented her true desire to do her own style of world/sacred music.

“I realized I have to do my own music. What am I about, and where’s my devotion?” Her fellow Bhakti musicians, Girish and David Newman helped to bring her to “a place where all these loose ends came together. We all felt we were part of a movement…like Woodstock…of people wanting to come together and expand their consciousness and go deeper within.”

Donna said goodbye to the “Material Girl” and hello to “Bliss” and “Sanctuary.” But they weren’t two completely different worlds.

“It is a community. People were so joy-filled. They never stopped smiling. I felt like I was down with the people,” she says about the Madonna days. “I learned the value of that touring with Madonna. I’d go out in front of the hotels and talk to people.” Same for Bhakti Fest.

Furthermore, the Madonna fans knew all the lyrics of her songs, and would sing along “…to the point that we couldn’t hear ourselves.” Again, same for Bhakti Fest.

From that original Bhakti Fest, collaboration abounded, Donna explains. “The artists were all one big tribe.” The musicians are almost like mix-and-match. On stage in many configurations.

“There’s a lot of integration of styles,” explains Donna. “The artists and teachers have been given space to blossom in what they offer.” For example, MC Yogi does hip hop. Sean Johnson’s style is NOLA infused. The Mayapuris perform traditional Indian ragas, samba and spirituals.

Donna sings in English, Sanskrit, and Spanish. Often mixing one to another, just as she did with Madonna on La Isla Bonita. A professional singer and dancer, everyone who hears her can channel some of that. “No matter how much I may be in an introspective place, it just goes there. You just see it. People want to dance, and sing together. It’s in our DNA. To have this celebration, together.” 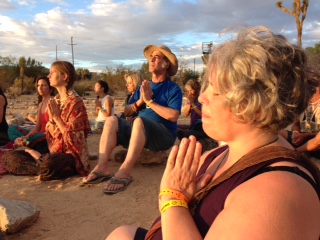 People connect with each other, and with Joshua Tree. “It’s the nature. Community. Expansiveness. Especially in today’s world. It’s a place that allows you to just be who you are, and not be judged,” explains Donna.

Now, to amp up that collaboration and closeness between artist and attendee, Bhakti Fest 2018 includes a Mantra Dome, for a more intimate gathering to chant sacred mantras.

“Bhakti Fest was so rooted in the devotion. People feel free to let go and show their devotion. These festivals are allowing you that.”