I vote for Govind Das. His dreadlocks are Bob Marley thick and long. Actually, longer, and sun-bleached blonde. He has an air to him that’s a cross between hang-loose California surfer boy, ascetic yogi, and Rock On! musician.

He can ride the waves of all of those, with his partner of 12 years, on stage, leading kirtan (devotional music).

Bhakti Behind the Dreads: Focus on Govind Das

Govind Das and Radha are well-known faces and names in the bhakti (devotional) yoga arena. Each year, at the trio of Bhakti Fests held in California’s high desert and Madison, Wisc., they teach vinyasa yoga classes, sing while they play the harmonium and guitar, and lead an ecstatic festival finale.

They’re headed to the seventh annual Bhakti Fest West, this week, to share their love and devotion for music, yoga, and the divine.

Behind the allure of Govind Das and Radha (their spiritual names) are Ira and Jacqueline. He was a Jewish kid from Maryland, and she was a model from Australia. As is often the case, each one was on their personal enlightenment journey when their paths crossed.

“That’s the way of the universe,” Govind Das says. “Somehow we were brought together.”

At the age of 18, the dark-haired young model moved to Los Angeles. Having already practiced yoga for several years, she was fed up with the intense focus on outer beauty to which she was exposed.

One day, she passed by Govind Das at a yoga studio where he was teaching. He was struck by her presence. Alas, she entered someone else’s class.  Six months later, after seeing her frequently at the studio, he crossed the teacher/student professional barrier and spoke to her. She said she was going surfing that weekend. It was a date. Today, they’re married, own the Bhakti Yoga Shala in Santa Monica, and are parents of two young children.

They still each have their own styles, which complement one another.

Setting the Egos Aside

“On one level, it’s like magic,” says Govind Das. “It’s like two souls mysteriously weaving their energy together, and it works. Acceptance is a really important part of it.  We set our own egos and agendas aside so that we can offer the best from our collective energy.”

While Govind Das found bhakti before Radha, she had been honoring Saraswati since she was a child. She was attracted to the deity of music and wisdom, visiting Hindu temples during an annual family vacation in Bali. She admired a poster of Saraswati on her bedroom wall until she left for Los Angeles.

“So they had this relationship,” says Govind Das about his wife and Saraswati, a golden emblem of bhakti.  She uncovered the power and symbolism of the goddess once she delved deeper into the bhakti world. Ultimately, she’d be given the name, Radha, (by Ram Dass) reflecting her devotion, and connection to the divine feminine energy.

Govind Das and Radha infuse bhakti in their home life.

“What we really try to do is honor the divine within each other. I devote my life to her. She to me. That’s our commitment. To honor that and live that and share that divine aspect of ourselves. Surrender all that to love.” 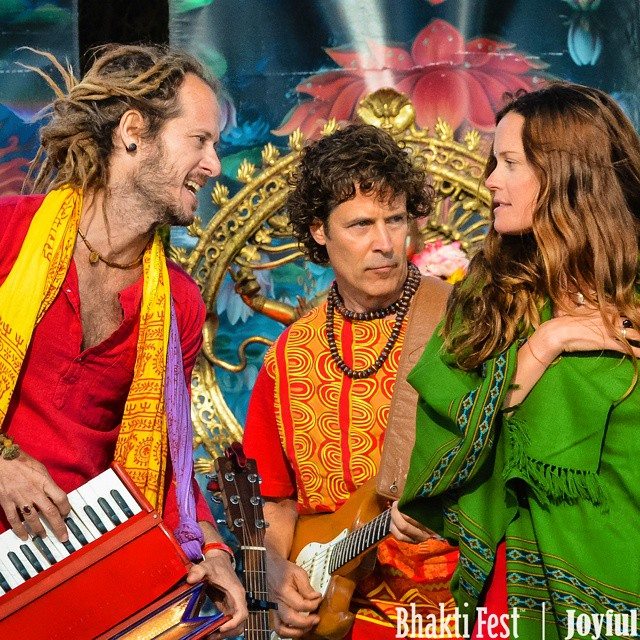 As parents, they try to raise their kids in a healthy, happy environment, filled with bhakti.

“My personal feeling is that men with children really get to learn what bhakti is all about,” he says about the love and devotion. “It’s the most important thing. To be completely devoted to them. They teach us what seva (service) is all about: being completely self-less. We try to teach them the ways of devotion, and who God is. Singing kirtan as lullabies, offering prayers to the divine mother before we eat.  More importantly, we teach them to live a sattvic (pure) way. A way of goodness. Understanding that we’re all connected as one.”

Govind Das’ and Radha’s students can pick up those vibes and learnings in their bhakti yoga or kirtan sessions.

“Our yoga is a manifestation and affirmation of our dedication to love, health, and longevity … celebrating life, body and relationship and the greatest of all gifts, a human birth … an opportunity to invoke and open up to grace.”

The pair will lead daily live-music-infused classes at Bhakti Fest, followed by a half-day New Moon/Rosh Hashanah soul-searching intensive Sept. 14. As musical artists, they take on the main stage Sept. 11 and 13.

Bhakti Fest’s core mission is to provide a platform where people can gather as a heart-centric community focused on love, devotion, and conscious living. People unite from around the globe to practice yoga, sacred music, dance, learn and grow.

Bhakti Yoga Shala was created in an Ashram environment for restoring peace within. Govind Das will lead a Thanksgiving spiritual retreat to India, Nov. 20-30.