Heart Rate Variability: Chant From the Heart, For the Heart

Bhakti Fest is considered the ultimate playground for yogis. In particular, for bhaktas (devotional yogis). While Bhakti Fest 2018’s Joshua Tree desert playground may span 385 acres, this year I was attracted to a tiny outdoor classroom next to a small artificial pond. Sitting on the sandy ground, or perched at the rim of the pond, a variety of singers, drummers and musicians shared knowledge and tips about their practices. Of note, chanting improves heart rate variability. in other words, chant from your heart, and you’ll be chanting FOR your heart, and general well-being.

As Gina Salá, one of the teachers said, “So many mantras. So much wisdom.” I’d add, So many artists. So much devotion. For the culmination of so much sangha (association/unity) of sound. 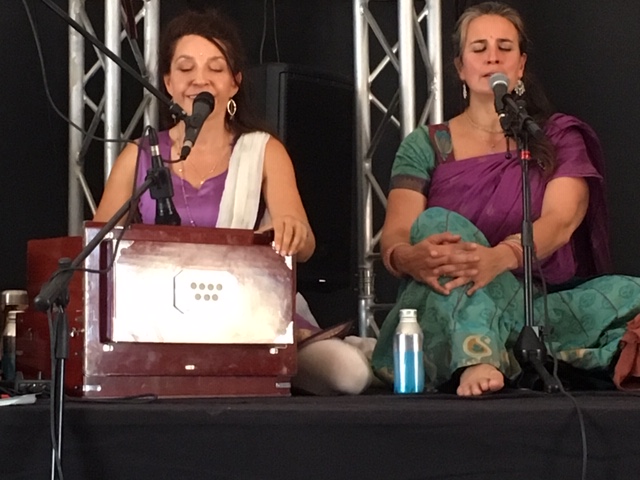 In a previous article of mine, Gina Salá spoke about music and devotion. A takeaway was that every voice is divine. Perfect.

Similarly, in Girish’s Kirtan Class at Bhakti Fest 2018, he said, “There’s never been another voice like yours. The voice is expressing who we are. Free the voice. Free the person. Your personal growth and evolution is inseparable from your voice.”

To me, Gina and Girish have incredible voices. They hit a sweet spot in my heart. Yet, Girish considers himself a drummer. And, most drummers don’t sing. He focused on chanting during his five years as a monk living in an ashram. “It’s not about the artistry of music. It doesn’t matter how it sounds.” He emphasized, “It’s your call to your creator.”

Most noteworthy, Girish spoke of the science behind chanting. There is clear data to attest to the benefits of singing kirtan or chanting in groups, in particular.

Chanting for the Heart: About Heart Rate Variability

In fact, a recent study completed by the University of Gothenburg in Sweden noted that those who sang together had synchronized heartbeats. The head researcher explained that singing is a form of controlled breathing, not unlike yogic breathwork which leads to many benefits, including lung capacity and heart health.

Furthermore, Girish said, “When we sing in a group, our brain waves start to sync up. And heartbeats too.” He talks about the phenomena called heart-brain coherence, which has been investigated by the HeartMath Institute in California, and heart rate variability (HRV).

Harvard Health Blog contributor, Marcelo Campos, MD, explains the importance of heart rate variability. “HRV is simply a measure of the variation in time between each heartbeat. Over the past few decades, research has shown a relationship between low HRV and worsening depression or anxiety. A low HRV is even associated with an increased risk of death and cardiovascular disease. It is fascinating to see how HRV changes as you incorporate more mindfulness, meditation, sleep, and especially physical activity into your life.”

“We want a more adaptable heart rhythm,” added Girish, “as HRV is a biomarker of human health. One fantastic way to increase our HRV levels — and thus our overall health and resiliency — is to sing. And, in fact, chanting mantras increases HRV levels better than any other types of singing.” Again, Girish has scientific research to back this up. He explains that when you chant mantras, you follow a particular breathing pattern as referenced in the Swedish study. Clearly, the breathwork associated with Tibetan monks is far from that of acid rock.

However, Girish pointed to research comparing traditional chants from diverse religions and cultures such as Ave Maria and Om Mani Padme Om. “All have the same breathing patterns. It’s an amazing effect. These practices activate the parasympathetic system.”

Chanting in Any Language, From the Heart

So, you don’t have to be a bhakta yogi. As Girish jokingly said, believe it or not, “There are people out there who have never done kirtan … or yoga … or worn Lululemon. It’s not just the yogis. All the world’s spiritual traditions are doing some kind of mantra. So that tells me that it works.”

While there’s plenty of evidence-based insights as to why it works, when you look at a toddler or child singing a nursery rhyme, it’s pretty obvious. Singing, especially repetitive sounds, makes us feel good.

“The primal human instrument is the voice. You don’t have to go to a music school to find out where a middle C is,” said Girish.

Shiva Rae, also at Bhakti Fest 2018, told an intimate gathering of women there, “Your first mantra was in your mother’s womb (her heartbeat).” And, in many cultures, the drum represents the heartbeat.

For the Mayapuris, the drum represents the sacred, too. In their Kirtan Class, the close-knit bhaktas from Florida explained the essence of the primal beats and their beloved mridanga.

“The drum is a manifestation of Balaram (Krishna’s brother). Sound vibration itself represents the lord. When we use our instruments in Kirtan we are dressing (up) the holy name, and the instruments are the decoration to attract us. The more that we offer our love, the more we will feel the syncopation,” they said.

“Something that runs through every culture is rhythm. Every tradition in every era on every continent has some form of collective singing because it just pierces so clearly. These instruments are a vehicle.”

However, the Mayapuris aren’t saying you can chant mumbo jumbo. “If you were to repeat Coca-Cola or water water it’s not going to quench your thirst. When we repeat the names (of the lord) it’s ever-present. It just gets sweeter and sweeter, and more ecstatic. Kirtan is the absolute platform.”

The Mayapuris are Vaishnavas. For them, the names of Krishna and Radhe, among others, are supreme. “In our tradition, we say the name of the Lord until our voice chokes up. Spiritual life starts at the mode of goodness. With that vision, it’s easier to attain that realization. Kirtan is like a shortcut. We’re not worrying about someone’s culture, politics, or religion. Kirtan, and in particular collective sangha. You get a little shortcut, like a machete cutting through. And, it’s accessible to everybody.”

“The first thing the chanting does is dust the mirror of maya (illusion). We just get so consumed and then we’re trapped. The things that get in our way, in our material brains, get pushed aside (with chanting). For this modern age, the scriptures say Kirtan is the dharma.”

In other words, just as Gina Salá and Girish say that everyone’s voice is divine, the Mayapuris say, “Anyone can take part and start to feel divinity.”