One of the newfangled yoga trends is goat yoga. It’s not about a new style of yoga where you imitate goat poses. Rather, you practice your cat/cow or downward dog as baby goats walk around—or on top of— you. If you’re lucky, maybe a goat will cuddle next to you in your savasana. However, on the downside, the goat may decide it’s time for a bio break. On your mat.

The Birth of Kid Goat Yoga

It shouldn’t be a shock that the origins of goat yoga come from the Western U.S. As recently as 2016, a woman living on a farm in Oregon recognized the healing aspects of yoga. At the same time, she understood that being close to animals had benefits. In need of some physical and emotional boosts, she meshed the two. She named it Caprine Vinyasa and got a slew of media coverage. And, boom. Goat yoga was everywhere. Not just in the country, or in the trendier spots like San Diego and Austin. But even in Chicago’s inner city.

Goat Yoga in the Inner City

What at first glance seems far removed from the prana in the midwestern cornfields is a hopping spot for goat yoga. Chicago’s west side. The goats are let loose to meander around the yoga mats, regularly, in Austin, the far west side of Chicago. Also, at Garfield Park, 10-15 minutes west of downtown. Both sites are right off the Eisenhower Expressway.

David is the goat herder that supplies the animals for the yogis. An urban farmer, he has a goat refuge just a few blocks from the rapid transit elevated line. From the street side of his house, you’d never know that he’s got a backyard full of chickens laying fresh eggs, and a large family of goats. He and his wife live in a traditional city house with a backyard that’s been converted into an organic mini farm. There’s a milking station where the goats, one by one, are milked. David and his wife then sell the fresh goat milk, plus goat milk yogurt and cheese.

He has about a dozen baby goats in his hay-filled garage. Each day, he loads the goats in his truck and releases them in a neighboring empty lot. Here, his babies graze. And play. 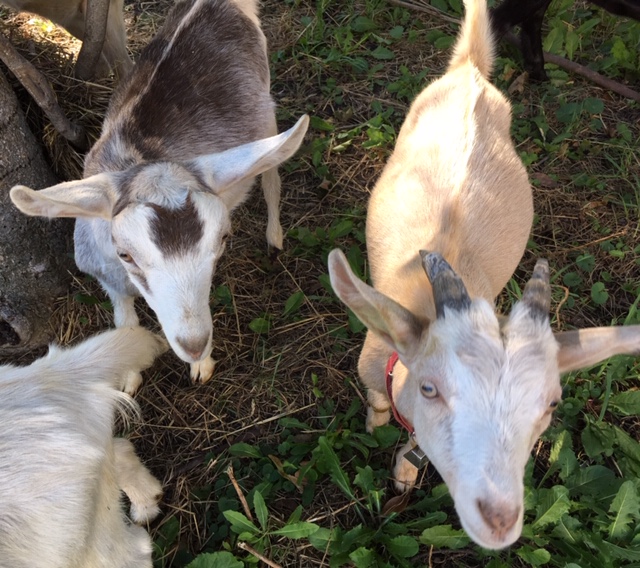 When it’s time for goat yoga, he can lead the goats to a community garden just down the street. The open space has a pen inside the fencing to keep the babies closer to the yoga practitioners.

Before you jump into the pen with the goats or start bringing goats into the studio, let’s break down the pros (and cons) of Caprine Vinyasa.

First, yoga is fundamentally about surrendering your mind and body. Perhaps one of the end results of goat yoga is that you give it up for the baby goats. You relinquish your control and go with the flow. Like the adorable kid goats. Don’t Worry. Be Happy. Nonetheless, Sarah, a yogi enthusiast, and mother of two children is not particularly a goat yoga advocate. Her take is that the more gimmicky, the more it dilutes the practice.

Second, in American society, people get caught up in physical boundaries. Even for yoga practitioners. Many have clearly delineated the “no-touch” zone. Oftentimes, American yoga students want at least four or five feet of space all around them. The more space between them and their neighboring yogi’s mat, the better, they feel. So, just maybe, the goats prancing wherever they want helps people to get beyond that required emptiness surrounding them. And, maybe, it’ll even get them more comfortable with having a person less than a meter away during their practice.

Third, yoga is all about mindfulness. Emptying your mind. Closing your eyes, or maintaining a dristi. However, keeping your eyes from jumping around to check the whereabouts and antics of the baby goats isn’t easy. Kim, a personal trainer who has been close to yoga for years, tried goat yoga at a conference. She found it was “distracting.”

Fourth off, yoga should be about absorbing, and relishing, the elements of nature. Prana. Breathing in the fresh air. Pressing your toes into the grass, or sand. Letting your skin soak up the sun.

Ideally, goat yoga is done outdoors in a farm-like environment. But that’s often not the case. My first view of goat yoga was inside a warehouse in East Austin. Definitely not an optimum spot for oneness with nature.

Fifth thought. Yoga teaches us ahimsa. Do no harm to any living being. So, any practice that helps us get closer to animals, and respect for ALL lives, is a plus. Hopefully, goat yoga is an entry point for urban Americans to get closer to farm animals. Then, as they appreciate the personalities of the baby goats, the participants may think twice before they eat goat meat.

In India, the cow is sacred. So, I’d expand upon goat yoga.

More importantly, I’d be sure that beautiful cows were within everyone’s view. Next, I’d require all participants to pet the cows, before they get on their mats. Moreover, have them meditate while gazing into the huge happy cows’ eyes. Adding in sound therapy, I’d ensure that each of the cows had cowbells on their necks, tuned to different chakras. For special effects, during savasana I’d lead the cows in a circle around my resting yogis. Or, ring the cowbells myself.

Finally, I’d suggest that everyone’s sankalpa include how they would have greater respect for farm animals, and take the plunge to refrain from eating farm animals for a week. Better yet, commit to a plant-based diet for 40 days.