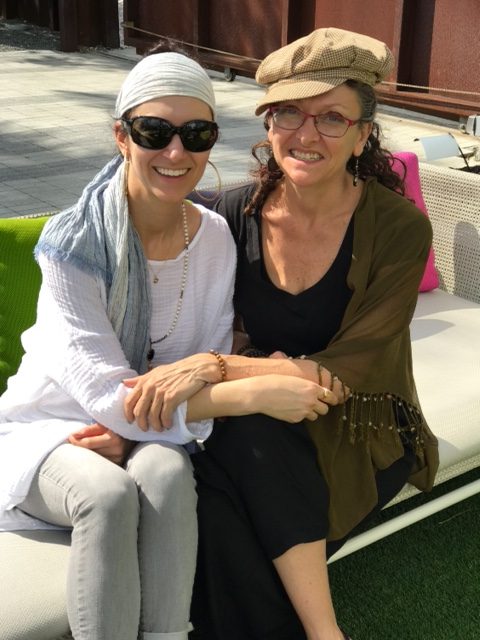 Recently, I had to heal from a bad dog bite, and deep second-degree burn. My daily yoga practice was placed on hold for nearly two months, as I tapped into other modes of yoga needed.  As a result, I chanted for almost three hours a day. Mostly, the Ra Ma Da Sa kundalini healing mantra, including Simrit Kaur’s recording. I invoked the sacred syllables and words that represent life’s elements like the sun and moon. I chanted day and night. In bed. At the beach. On the bus. I shut the outer world out to absorb and retain the prana and healing energies of the universe.

Invoking the Warrior Within, With Simrit Kaur

Simrit Kaur‘s was one of my favorite renditions.  It was trance-like, rhythmic, and celestial. Simrit believes this mantra is great medicine. “(When) we chant this mantra with our own voices…it’s more powerful than even listening to someone else do it.” While there are many ways to interpret Ra Ma Da Sa, she notes its power of providing internal balance which says, “I am that infinite healing that is within me.”

Now that I’m back to normal, it was a real treat to meet up with Simrit, in Miami, as her band was setting up.

Simrit launches her Resilience Global Unity Tour Wednesday, March 15. The world premiere takes place within the zen-like setting at The Sacred Space*  in Miami’s Wynwood district off North Second Avenue. From here, she heads to St. Petersburg on the other side of Florida, Asheville, N.C., with many performances on the way to Canada.

Despite her accolades on iTunes, World Charts, and Billboard Music, Simrit has graced South Florida with her beautiful blend of mantra music only once before. She feels particularly grateful to return to this multi-cultural music mecca. Miami is a good fit, as her new album is about cultural blends, that reflect her own life, growing up Greek in the deep south. “This new album has to do with all of us coming together,” she says. “Diversity is the strength of the community.”

She’s looking forward to people from all backgrounds coming together and having a good time in Miami.

“This space is awesome. It’s rad.  I love that they have Reggae outside. Inside, it’s like a museum space. It’s an oasis,” she says.

Her full band, uniting from other parts of the country, includes world percussion, harmonium, the 21-string West African kora, cello, electronics, and vocals. While some may consider her music mantra meditation or kirtan, influences from other cultures are clear.  Many of her songs are sung in Gurmukhi, the language of the Sikhs, but she also sings in English, and in her latest album, Resistance, has a subtle global warrior undertone to her tunes

Tuning Up Intuition with Mantras

“People tell me it’s a highly engaging experience. It takes people on a journey,” Simrit says about their dynamic style of music.

The journey is knowing oneself. Tuning in to the heart. Intuition.

“Mantra is the projection of the mind,” she says. “It’s not spiritual. It’s practical. It changes the chemistry of the brain…blood…body. It widens our perspective. It acts like a drug. We’re happy (when we practice mantra meditation) because we feel ourself. It has its own rhythmic pulse…and electromagnetic fields…”

She explains that it’s easy to get in touch with who you are. In fact, all mantras are based on primal universal sounds that take you to that same place. Consequently, they are accessible by all and empower intuition.

“Intuition has to do with not knowing. Feeling.  I don’t care to know everything,” she adds.

Most noteworthy, the power of communal versus individual mantra is considerably stronger. Hence, guests at her concerts can expect to leave in a state of bliss. Ananda.

“When one person is emitting a positive vibration, it affects the whole earth,” she says, talking about the scientifically proven theories about the power of meditation. She likens it to a ripple effect. “If you have a little bit of water, and then 500 times that, it’s so much more powerful. We feel inspired when we’re together. When we come together with music, sound, and mantra, it has an exponential effect.”

That’s one of the purposes of her Resilience World Tour, and the name of her latest album, “Songs of Resilience.”   She believes that challenges only make one stronger.

“Songs of Resilience” is about her personal journey. She says her most recent music is about human conditions — and suffering — since the beginning of time. Simrit was born in Greece. An orphan, she was adopted by a Greek-American family. Her younger brother, who was also adopted from Greece, was a special needs child for whom she had to give considerable care and attention. Early on, she questioned the real meaning of life. She recognized the challenges that Greeks have been going through for thousands of years. And, the state of our society today. Especially in light of the intense isolation many of us consider as the norm, nowadays.

Connecting With Your Roots

“That’s a big sickness of our time. Being alone,” she says, alluding to how music can heal. “We can create an incredible experience in tumultuous times. Music is a powerful medium. We feel inspired when we’re together.”

Simrit is saddened by the lack of family unity, and honoring of one’s heritage. Similarly, she says the abandoning of one’s roots is “a disease in America.” Her adoptive family passed on their respect for traditions and family.

“Our parents were rooted in the Greek culture. They’re like yogis in the truest sense,” she says about her parents. Even though they don’t do yoga on the mat. “They taught us to be loving and kind. We do yoga to be expansive.”

As part of the global tour, Simrit, her husband and child, will spend time in her birthplace. Then, in April, she has two performances in Paros, Greece, before heading north to Estonia, Latvia, Finland, Sweden, and Norway.  Finally, the tour ends in Mexico City in October.