That’s what Rip Esselstyn, author of “The Engine 2 Diet”  and “Plant-Strong” says about nixing blood, pus, and guts on your plate, in favor of plant-based diets. “Meat consumption is something we need to say goodbye to,” he adds.

Globally, there are 375 million vegetarians. The Humane Society confirms that veganism is becoming mainstream, as the percentage of meat consumed, yearly, continues to slide downhill.  While the vast majority of our population does not identify with being vegetarian or vegan, more than one-third of Americans buy meat alternatives, and dairy-free milks and cheeses are also getting more and more popular. This month, a vegan butcher shop will open in Minneapolis, with more than 35 vegan cheeses, meats, and butters.

Perhaps one of the biggest indicators is the Barnard Medical Center, in Washington, D.C.  Opening this month under the vision and guidance of Dr. Neal Barnard, its mission is to combat disease through plant-based diets. “By comparing disease rates in vegetarians vs. meat-eaters, it is clear that a meaty diet is responsible for hundreds of billions of dollars in medical costs annually,” he says.

Esselstyn has long been a proponent of vegan lifestyles. His father, Dr. Caldwell Esselstyn, was one of the lead researchers in “The China Study” and the documentary, “Forks Over Knives,” both of which gave startling documentation as to the health benefits of no burgers or milkshakes. Both Dr. Barnard and Dr. Mehmet Oz have been enthusiastic supporters of father and son’s declarations. Dr. Oz, a cardiothoracic surgeon applauds the film, “I need all of you to see it… This could be the Hail Mary of medicine.”

The Diet of the Firefighters: Plant-based 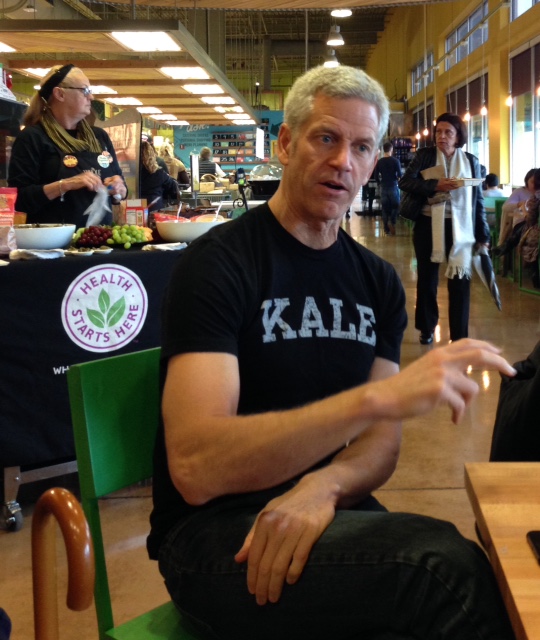 After the elder Esselstyn’s groundbreaking studies proved the health benefits of foregoing junk food, meat, dairy, and fats, Rip tested the diet among his fellow firefighters in Austin, Texas.  These are the kinds of guys that pose with their hose, to show off their six-pack abs, divine delts, and buff behinds. They are uber macho men that thrive on meat and potatoes.  So they think

Rip, himself a consummate athlete, proved real men prefer spinach. Raised a vegetarian, he tried to dispel stereotypes and myths. “I used to shake men and say, ‘Dude, you do not need meat.’”

Rip convinced them that plant-based diets were the way to go. He started his 28-day challenge with the guys in the firehouse, one of whom was on track for an early heart attack. All benefited. Then, in 2006, 58 people took the Engine 2 challenge. The participants lowered their cholesterol levels by 40 points, on average.

Now Rip is somewhat of a celebrity. With two books and an array of healthy foods with the Engine 2 Diet labeling, he’s also a Whole Foods ambassador. At the San Antonio original Whole Foods store, Rip recently talked about why plants are the ultimate strong food.

Angela was in the crowd to welcome Rip. She was diagnosed four years ago with a trifecta of Type 2 Diabetes, hypertension, and depression. Her doctor steered her to a high protein diet and meds. That didn’t sit right with her or her husband, so they jointly began Rip’s diet. After three months, Angela lost 25 pounds. She’s no longer on any medication for diabetes or hypertension. To top it off, she kicked depression out of her life. She’s eating the right carbs, and cutting out all animal proteins and fats.  Her husband lost 60 pounds and is on track to lose a few more. His side effect? He said goodbye to depression and anxiety.

She admits it wasn’t easy to go full force at first. In fact, she tried a few times, before she got comfortable with it. Now, Angela is a big advocate of The Engine 2 Diet.

“Doctors have no background in nutrition,” says Rip. A thought that has been echoed by many. They are swayed by big Pharma, and the promises made by the sales reps.

About half of Americans are at risk for heart disease.  “It’s not because we have bad genes, but because we eat bad food,” says Rip. “Statin drugs haven’t made a dent.”

Beyond fostering healthier hearts with plant-based diets, “We can slow down, halt and even reverse, in some cases, cancer. This is the cutting edge.  Putting the responsibility on your shoulders,” he says about lifestyle management and change in diets.

For those that think you need your seafood for Omega 3s, Rip says just one teaspoon, daily, of hemp, flax, or chia is a much better source.  The problem goes far beyond big Pharma and doctors who are not nutritionists. Habit is hard to break. We are conditioned by our culture to see meat and dairy as fundamental, when, in fact, the cow’s milk is for calves, and eating the flesh of animals requires 90 percent more resources than eating plant proteins.

“We have to be de-programmed. (Good) Carbs are not a bad thing. Dairy is the most insidious thing out there now. All of it is loaded with casein, the number one tumor-promoting ingredient.”

For those wanting to go deeper than the books or movie, Rip, his father, and other colleagues run five-weekend immersion programs every year, along with a one-week full immersion in Sedona, Arizona. They claim that after one week on The Engine 2 Diet, participants can see that they CAN reverse diabetes and cardiovascular disease.

Learn more about Rip’s recipes and FAQ about plant-based diets, or join the Forks Over Knives Facebook page.