Yoga is transformational — on a deep level, rather than just loosening your hamstrings and building your quads. True yoga is invisible. It’s not about the handstands. 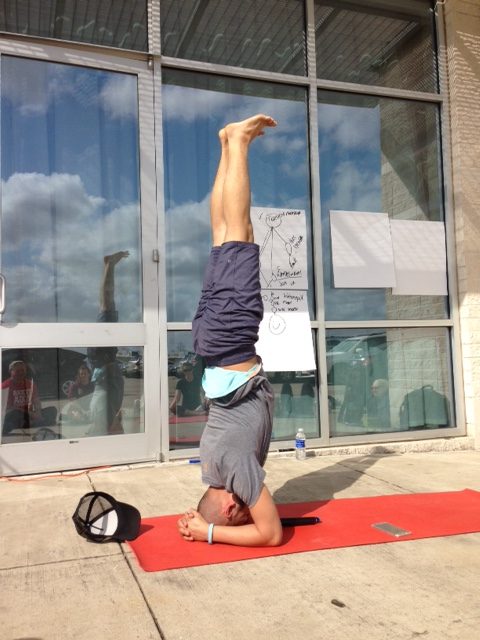 Yes, he has great quads and hamstrings, and can do all the challenging yoga poses with his body. However, talking to him, it’s clear that his greatest accomplishments via yoga are those that aren’t visible to the naked eye.

After college, he moved to Austin. The capital of Texas is a great place for yoga enthusiasts wanting to live a clean lifestyle. But Ricky wasn’t running down that road. He got stuck in a rut. The addiction hole swallowed him up. Tobacco. Alcohol. Meth-amphetamine. Prescription drugs.

He tells how yoga is transformational on Tommy Rosen’s Recovery 2.0. Tommy Rosen is a leader in the yoga world for making a difference among people with addictions. A former addict, he travels the country sharing his healing art with those who are still struggling to overcome their weaknesses.

Ricky Tran, like Tommy, overcame his addictions through yoga. Like Tommy, he is an apostle for clean living now and is a featured workshop leader at yoga events beyond his hometown.  Ricky was in Houston recently for the 2016 Texas Yoga Conference.  One of his morning sangha sessions was devoted to yoga as a means to transform oneself and clear the demons.

There was a lot of addiction for Ricky.

His road to recovery wasn’t as easy as sticking on a patch or just saying no. It rarely is that simple.

“The way you do anything is the way you do everything. I have an addictive personality.  We give 110 percent. When I partied, I partied to the extreme.”

He talks in the third person about his former self, as clearly, he’s a different guy now. He and his wife own two yoga studios and are parents of a newborn. He looks and sounds like a family man, with solid family values.

“Ricky wanted to have fun. I hated my life. I was almost rock bottom. I got into a lot of trouble.”

He was living in party houses. One day, he was driving home to change clothes, and it hit him that he had to change his life.  He left Austin and moved back to Dallas. He’s been living there ever since.

Fortunately, he got hooked on something good for him. Yoga.

Yoga is Transformational and Powerful

Ricky found a free yoga class. It changed his life. He was a macho kind of guy. Dare we say he was partly lured into yoga for the scenery? Aka women in tight skimpy clothes.

The experience wasn’t what he was expecting. He was focused on himself, rather than the women surrounding him. “My shirt was completely soaked. What kept me going back was it felt so good.”

After six months of yoga, he stopped smoking speed because “It was ruining my yoga practice. My yoga practice became more important than anything else.” In another six months, he was able to quit cigarettes, binge drinking, and abusing prescription drugs.

“Duh, I don’t want to smoke anymore. I was able to quit smoking, quit drinking, and quit popping pills at the same time.  I was empowered. I wanted to create health, abundance, and happiness.” 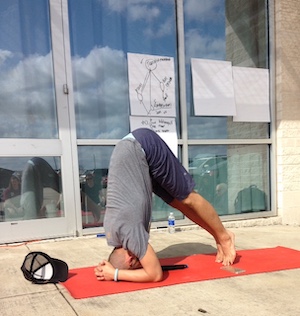 The light switch may go off, but it’s easy to go back on. “Samskaras (patterns) come up when you have nothing else to do. It was unintentional, but it just happened (relapses). I knew I had to do something different.”

In 2008, he met Sri Ramaswami who introduced Ricky to the true meaning of the yoga sutras.  Ramaswami was a direct disciple of Krishnamacharya and teaching at Loyola Marymount College in Southern California.

“My head was spinning for about a year.” It’s been about nine years, and I keep going back.”

Ricky saved his money for a year to be able to study with Ramaswami. We’re not talking about a weekend or a week. The first time, he went for 45 days. By 2010, when he came out of a deep meditation, he was no longer the same Ricky.

“Suffering seemed to have been destroyed in that moment of realization. Of course, if one does not maintain a long and consistent practice, the gift of yoga does not stay.”

Now, he dedicates ample time to studying the yoga sutras with Sri Ramaswami every chance he gets.

“When you go inside, it can be scary.”

“It’s a dark place. In the moment of awakening, it’s like a flash of awakening and things start to make sense to you. It’s a spiritual thing. You realize that you’re not this body. There’s a part of you that goes on forever.”

“You uncover the Light or Truth within. You experience the undying, immortal Self within. Truth is something that does not change in the three phases of time: past, present, and future. If it changes, it was never true to begin.”

“Yoga can do what nothing else can do. It will introduce you to yourself,” he beams.