Kirtan Strikes a Chord - The Yoga of Sound

“Kirtan is a social practice. Just in a few minutes, you can become like a flock of birds,” — Mike Cohen, Kirtan Leader Institute.

Bhakti, (devotion) as expressed through Kirtan, is one of the lesser-known forms of yoga. And, it’s my favorite. It strikes a chord, literally and figuratively. As the yoga of sound, chanting of sacred music, or mantras, it can be done in any language. Not surprisingly, I enjoy it in many different tongues.

I never forget what a Swami said at my Ayurvedic training in India.  Addressing a hall filled with more than 100 people sitting on the floor, neatly in rows, he said Kirtan may be the hardest part of yoga for Westerners to pick up. Most importantly, once they do, it’s the hardest to give up.

Moreover, just like meditation or asanas, Kirtan can be done anywhere, anyplace, by anyone. Like meditation, Kirtan can be especially deep and heartfelt when done in community. In India, groups parade down the streets spreading their devotion (harinam sankirtan). I’ve felt the group energy at festivals with more than a thousand people chanting and swaying to the music in unison. That said, just like meditation, Kirtan can be beautiful when you’re alone. For example, during a personal yogasana or meditation practice. In the car, in your garden, in bed— even in the bathroom or a board meeting. Finally, you don’t have to belt out mantras. You can repeat them in a whisper, or silently.

Kirtan is chicken soup for my soul. And my body, too.

Recovering from a nasty dog bite, I muttered, sang, or mouthed a healing mantra, for 30 minutes or more, daily. In bed. At the beach. On a bus.

When I feel I need to re-stock my store of chicken soup, I go where the bhakti is. I plan vacations, or weekend jaunts, or host Kirtan en Casa gatherings for a mini re-charge. Together, we bask in the beauty of the sound vibrations. We feel the music deep within.

How and why do the good vibes flow? A few Bhakti Fest workshop leaders and musicians explain. 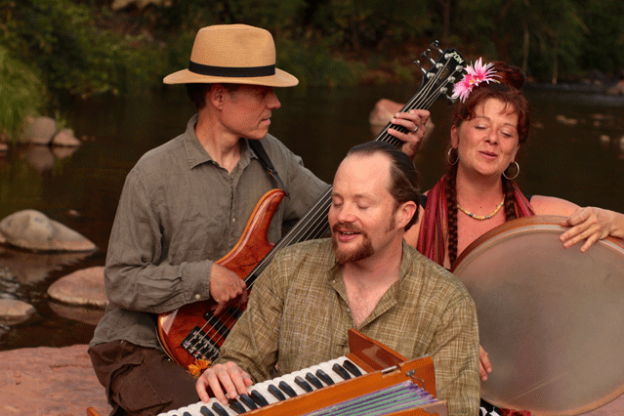 Sean Johnson owns two yoga studios in New Orleans and leads a Kirtan band that plays every year at the New Orleans Jazz Festival. For the last few years, he has been leading Kirtan intensives, workshops, and concerts at Bhakti Fest, which are always at the top of my ‘to-do’ list.   He explains why chanting makes a difference, in a way that my rational mind can understand.

“Sound is used in surgery to break up kidney stones. Our scientists have discovered that most solid matters vibrate to the (sound of) Om. Bones. Buildings. It’s a never-ending canvas of sound. The yoga of sound is the most underrated.”

“You are aligning yourself with a divine vibration,” says David Newman.  The Oms changed Newman’s life. He was on the road to be a lawyer, when he stopped, did an about-face, and opened a yoga studio. Today, he has a book under his belt about his experiences, numerous CDs, and he leads Kirtan retreats.

“The mantras are like a magnet, bringing you toward themselves.” — David Newman.

“Every time you chant, you poke a hole at that false sense of yourself…to really get the messages from within…That’s when they stick. After a little while, there’s s little birdie that says, ‘Hey you. Everything’s gonna be ok.’  And that transforms your life.”

Saul David Raye leads Yoga Teacher Trainings and spiritual tours to India, among other things. He explains, “That bliss sheet is vibrating at the highest resonance of joy. It’s ecstasy. (Sometimes) our energy gets stuck in other places. Imagine you live in a five-bedroom house but only live in one room.”

Kirtan is the path of peace, and more for Raye.  “Shanti. Shalom. Blessed are the peaceful. But bhakti is something more. Ecstasy. The path of bliss. Prema. Love. But not just any love. Divine love. When the soul elevates to the current of God, without lowering God to suit our agendas.”

“Psychologists say every being wants to be loved. We also have this innate need to give love. It’s a two-way street,” adds Raye.  As an example, he points to kids who may be lacking in love, who may say, ‘I want this. I want that.’ They search for superficial things to fill the void.”

“Unless we understand who we are we can’t understand our unity with others. Unity in diversity is at the heart of Bhakti.” — Radhanath Swami

“This chanting of mantras is an ancient eternal way in which love is awakened from within our hearts,” says Radhanath Swami. In his college days, he left the University of Illinois to hitchhike across continents to find the true meaning of life. Now, his life is devoted to bhakti. He has authored two stellar books about his life journeys, one of which is being adapted into a movie.

In closing, Johnson relates wisdom from the Sufis. “The voice is the barometer of the spirit. But we can also sing to shift our mood.”