Adam Bauer Honors His Gurus in Return to the Sacred

Adam Bauer released his third album, "Return to the Sacred," last weekend. Bauer is a bhakti yoga practitioner, teacher, and healing artist. He routinely shares his voice and inspiration through both ancient and contemporary spiritual practices. 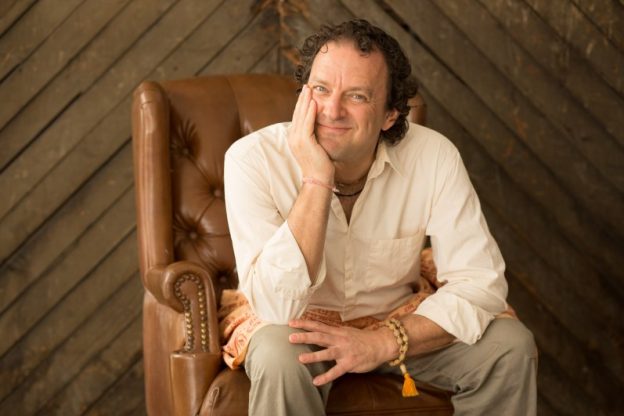 He began this path when he was just 18 giving up sex, drugs, and rock and roll for a life of renunciation, poverty, and celibacy. After a few years, he left the monastic life, but remained true to his spiritual quest.

“I feel incredibly grateful to be on this path, writing and singing and playing music in service of healing along the path of awakening. I’m very keenly aware of the depth of blessings and guidance that have run through my life since I began to awaken to divine reality as a teenager. I feel tremendously fortunate, to have felt so taken care of by the great spirit for my whole life.”

For 30 years, he has been a practitioner of the “I Ching,” or “Book of Changes.” Likewise, for almost as long, he’s immersed himself in the world of sacred music. He toured for many years with the Kirtan Wallah, Krishna Das. Another bhakti great he shared the stage with was the late Shyamdas, author of more than 20 books.

Bauer was also close to the legendary Ram Dass. Ram Dass was a Harvard psychology professor, who revolutionized American consciousness, with his blockbuster "Be Here Now." Adam Bauer sang at his compound in Hawaii a number of times.

Krishna Das, Shyamdas, and Ram Dass each spent a significant amount of time in Kainchi, India. That's where they soaked up the wisdom of their common guru, Neem Karoli Baba.

Neem Karoli Baba (1900-1973) was an inspiration to the younger American.  Maharaj-ji, as he was lovingly called by his devotees, was “a living example of the way boundless consciousness and love can abide within what appears to be a bounded bodily form. He’s an example of someone who shows how much bigger and brighter the world is than what most of us grew up believing. That in itself can be truly transformational,” Bauer says.

Sadly, Ram Dass passed away December 21, 2019. That night, Bauer composed a mantra to Ram Dass and Neem Karoli Baba. The single is one of the highlights of “Return to the Sacred.”

“This melody and mantra spontaneously arose in those predawn moments. I added some of the classic messages that Ram Dass brought us directly from Maharaj-ji. Love everyone. Serve everyone. Feed everyone. And, remember God,” Bauer says.

His tribute, “Baba (Neem Karoli Guru Bhai),” carries simple notes and repetitive lyrics. The tune is easily lodged in the listener’s head — and heart. Yet, it’s layered with the elixirs from India. Venerated musicians and vocalists joined in a recording studio in India. There, the engineers incorporated the pakhawaj, a traditional temple drum, a bass sitar, and the bansuri bamboo flute. Stateside, a cellist and percussionist added their special touches. “It’s great to have the ability to collaborate with such devotion-rich artists,” from East and West notes Bauer.

Definition of a Guru

Westerners, often have a hard time wrapping their heads around the concept of a guru. Adam Bauer clarifies it.

“There’s a lot of different ways to think about the word guru. One definition is that which dispels darkness. There are many levels at which people can come into our life and help us move from darkness towards light.

"If we are looking for someone to be a big-G Guru—an infallible and perfect distillation of divinity with no faults or shadows in themselves--that is a very tall order which is not often fulfilled in this world. But, there are many ways that people can be small-g gurus, or teachers, for us in one domain or another. We can learn from so many people and situations, even though very few people are perfect and most everyone is fallible. In the end, I would say that one human definition of the word guru is someone who can truly help us evolve, practically speaking, into better and more complete expressions of ourselves. And there’s a lot of those people in the world, thank God.”

Some say that your guru doesn't appear until you’re ready for it. Therefore, it’s pointless to be searching with a fine-tooth comb. Bauer concurs.

“I believe the teacher appears when the student is ready. But, it’s good to remember that sometimes she appears in disguise. So, it’s on us to open wide our eyes and learn to see the divine everywhere.

"I never met Neem Karoli Baba in the body. I’ve only met him within myself and as shared in my relations with other devotees. Maharaj-ji has played a little hard to get with me over the years --as he has with many people-- though he has shown up occasionally in the dream realm. I have often felt him in my own fashion while singing or playing kirtan, or involved in my own prayers or devotional practices. I have perhaps felt him most often in my relations with other devotees in his sphere—some say that the sangha (association) is the guru, which allows and invites us all to embody that sacred essence in how we treat each other.”

“In my experience, it looks like we’re all finding our own paths, even while divinity is guiding our footsteps in ways we cannot even comprehend. Plenty of people have learned a lot through their experiences with false gurus. One person’s guru is another’s shyster. We must believe in, and trust, our own Self, and do our best to love everyone and treat them all kindly. We are all one. As long as any of us suffer, we all suffer. We were born to love each other. So let’s do that.”

Finally, Bauer says Shyamdas, taught him that “detachment is useful to cultivate in many circumstances in the world, no question. But ultimately, when we find God, when we have our own living experience with the power of the divine, that’s when we should be holding on for dear life, so that we remain attached to what is sacred and true, and don’t lose our anchor."

He concludes, “I’ve had a handful of very important teachers appear in my life at what seemed like just the right times. The blessings that arose from those relationships continue to unfold and ripen many years later. I feel like part of my life work is to redeem the faith that others have had in me, by continuing to focus my attention on some of the basics of living a good life, things like being kind to all creatures; stewarding nature and my relationships as best I can; looking for opportunities to serve others and recognize the divine in everything around me.”

To listen or buy Adam Bauer singles or album, visit his web site, iTunes, or Spotify.

For more about bhakti yoga, use the search function to read related archived articles.