Asteya and Aparigraha -- Waste Not, Want Not

A man dies.  He is not ambushed. He is not the victim of terrorists. He is not in Iraq. He is in Arizona. He is at his place of work: Bullets and Burgers. He is shot by a nine-year-old with an Uzi.

If I were a novelist, I couldn’t invent such a crazy plot, nor the farcical name of this establishment.

When I hear accounts like this, I think there are so many things wrong with our society. When I was a kid, we played in the street. We made snowballs, and if we had any pent-up aggression, we may have smacked a kid or two with a handful of frozen flakes.

In the summertime, we took out the garden hose and sprayed each other to cool off. Again, maybe we hosed the odd man out a bit too hard, but it was clean innocent fun. The most harm done was maybe a bit too much water going up to someone’s nose.

About a decade ago, in the business world, “green” was the buzzword. Yet ask any old timer, and I’m sure their childhood was naturally “green.”  My mom made our clothes, and with the remnants, sometimes crafted clothes for my dolls. Coming from the depression era, my parents always recycled, before we knew what the word meant.

Pillows were stuffed with nylons that had “runs” in them. My mom had a huge cookie jar filled with buttons she’d pulled from items that we no longer kept. My clothes, when not homemade, tended to be my sister’s overgrown picks. Sometimes, they were third-generation hand-me-downs.

I remember going to the zoo one summer with my siblings and family friends. When one of the kids complained he was thirsty, his dad said, “open your mouth and drink the rain.” 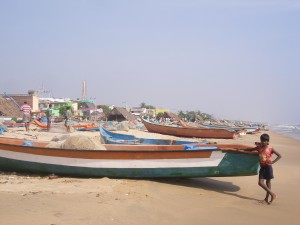 Today, 3.4 million people per year, die from a lack of clean drinking water. Yet in the land of plenty, consumers spend more money per month on bottled water than what some people earn in a month. While I shouldn’t care if people want to waste their money, I do care about the waste to our environment.  Numerous studies have confirmed that bottled water is no better than tap in most parts of the United States.  The “need” to drink bottled water, or sodas for that matter, is strictly created from advertising.

Two of the yogic principles (yamas) are asteya and aparigraha.  Combined, basically, these mean to not want or take what does not belong to you, in a broad sense. More importantly, they mean to not WANT what you don’t need. According to The Sivananda Companion to Meditation, “Asteya includes overcoming greed and the tendency to waste… Aparigraha means overcoming the greed for possessing objects…Parigraha (possessiveness) …is based on ignorance of the laws of life.”

Waste Not, Want Not.

Haven’t we all heard that? Yet few practice it.

I’m a gypsy. Always have been. My mom used to say she felt naked without her earrings, multiple bangles, rings, and necklaces. The wanderlust in me tends to manifest in my travels. I have happy feet or patas calientes. I love traipsing around the world and began solo journeys when I was 16.

In all my travels, I’ve packed things that I can leave behind. When I was younger, I was great at bartering. I’d return to the states with my duffle bag filled with new items in place of the old. Now, I relish giving my books and clothes to people that may appreciate them. In one hostel, in India, I gave a male front desk clerk several of my shirts, offering them for his sister. He told me he’d wear them and tried one on in front of me.

I’ve always recognized the many “have-nots,” and as a result, find parigraha offensive.

While they don’t necessarily go hand in hand, I have found that aparigraha and asteya can be developed by living off the grid. Over the last few months, I’ve spent the bulk of my time off the grid: on the Pacific Ocean, on the Sea of Cortez, and in Austin, Texas. Read about those experiences at https://thenamastecounsel.com/yoga-blog/