It’s not every day that you see beautiful yogasanas in a museum. That’s why I did a double-take at the Albert Hall museum in Jaipur. There is a great collection of sculpted clay yogasanas (postures).

Albert Hall is named for a former Prince of Wales. It is the oldest state-run museum in Jaipur, and one of the oldest in Rajasthan. It “became a centre for imparting knowledge of history of civilizations, inspiring traditional Indian arts, crafts, and architectural forms…”

The museum dates back to 1887. Of course, artifacts far precede the opening of the facility. 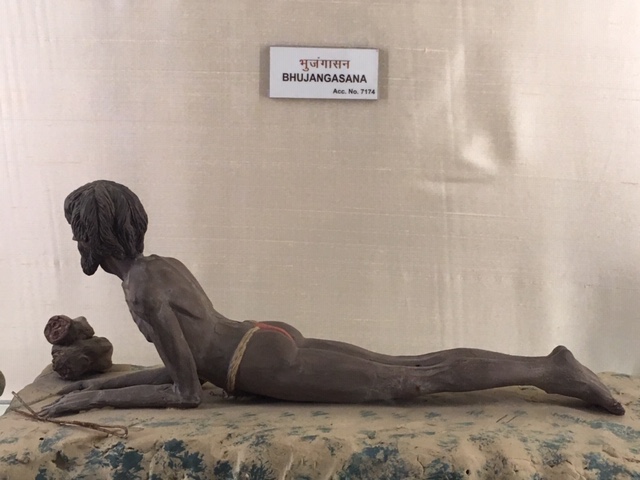 The display of yogasanas features some of the modern-day common poses. At the same time, most are not part of your typical Western yoga class. Beyond the cobra pose, the other yogasanas can require years and years of practice to master. Together with patience.
Cowherd Yogasana at Jaipur's Albert Hall 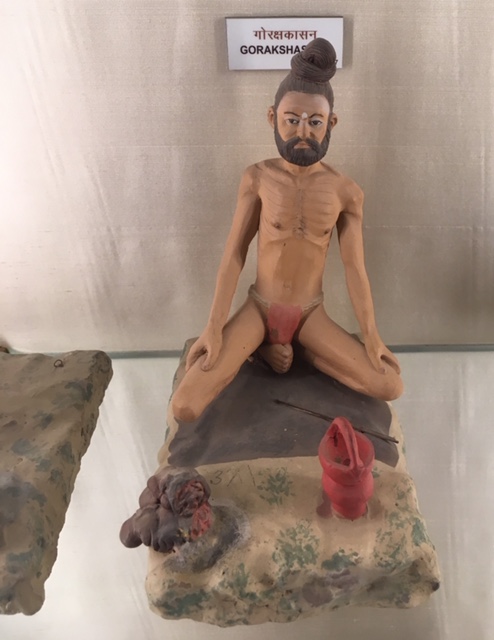 According to the museum exhibit, yogasanas lead to the higher goals of yoga.

Namely, to control and govern the “erratic Ego to restrain it from generating worldly desires and to aid the mind to concentrate within itself. Yogic postures and meditation help in achieving these objectives for physical health and spiritual evolution.”

The featured yogasanas, “exquisitely sculpted and painted 19th-century clay models, are on display here. Their provenance is probably Krishnagar, West Bengal, where the art has survived and flourishes to this day. The figures show a range of postures (Asanas) by different Hindu sects.”

What’s more, taking a close look at these small sculptures, one can ascertain which lineage they represent. In particular, from their forehead markings. 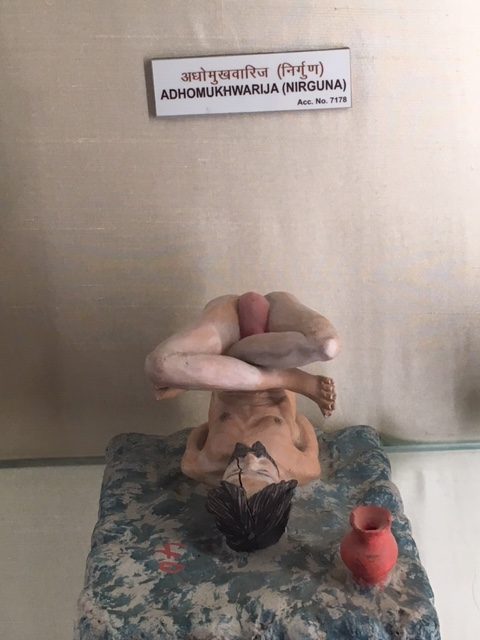 First, are the Shaiv. As the name indicates, they are worshipers of Lord Shiva. This lineage traditionally wears the burnt sienna-colored rudraksha beads. Most notably are the colored tilak (markings) on their foreheads. They paint three horizontal lines above the eyebrows.

Next are those that honor Vishnu. Again, the name refers to Lord Vishnu. These are the Vaishnavs. They trace yellowish tilak in two vertical lines at the forehead. The parallel lines narrow down and connect at the bridge of the nose.

Different from the Shaiv, Kanphata is ascetics that venerate Lord Shiva. Their traditions meld different practices. For example, bits of Buddhism, yoga, and alchemy. As such, they are recognized by their gauged ears. Often, the earlobes are plugged with metal or wood. Plus, they may insert pieces of bone in their hair. While their heyday was between the 12th and 15th Centuries, there are still followers today.

Lastly, the Nirguna are Vedantists, followers of Shankaracharya. This sage was born in Southern India, in the state of Kerala, around 780 CE.

In any case, the exhibit confirms the legacy of yogasanas among the different Hindu sects. And, the benefits that, even today, its practitioners recognize.