Bhakti Without Borders: nominated for a 2016 Grammy award

Several years ago I wrote an article about the proven clinical benefits of Kirtan, and bhakti, on the physical body.  Now, the sound of music will have an even greater impact than its listeners. All profits of a new album, Bhakti Without Borders, available on iTunes May 12, will support 1500 impoverished girls at three schools in Vrindavan, the town that gave birth to Krishna and Kirtan.

“Most people visit India, and they take something from this country,” says Madi Das, executive producer of Bhakti Without Borders. “But with this album, we want to give something back.” 100 percent of profits from album sales will be donated to Food for Life Vrindavan, a humanitarian aid organization working in the poorest villages surrounding the holy city.

I heard about this charitable entity several years ago and always toyed with spending several months doing karma yoga/seva there. While it still crosses my mind, the quicker fix is a simple donation, and enjoy the great vocals, beats, and instrumentation on this album.

This is the We Are The World for the Kirtan community, and its global hues are inescapable. Madi Das blends melodies from the East Indian Bhakti tradition with the folk, bluegrass, and country elements of traditional American and Irish music.

He collaborated with Dave Stringer, who I’ve enjoyed a number of times at the BhaktiFest main stage.  Stringer serves as producer and strums the guitar and dulcimer on the album. Sheela Bringi plays harmonium and bansuri while Patrick Ritchey keeps the beat with eight different percussion instruments. But what sets this apart, is that Das partners with 11 female vocalists for ten duets. All artists have contributed their time and talents, knowing how far a few dollars can go to help the girls in Vrindavan.

“Kirtan started in the streets,” says Stringer. “Ecstasy is extremely contagious.” He and Das are hoping this new passion project of theirs will spread quickly and deeply, to raise as many funds as possible to improve the future of the underprivileged girls in Vrindavan.

“My involvement sprang from a desire to use my talent to create an album that could grow into something bigger than the initial audible experience, something that could continue to affect change long after the music stopped,” says Das. The Bhakti benefit project took more than a year to complete. Relatively little, compared to what has already been invested by volunteers in Vrindavan.

About Food For Life Vrindavan

Back in 1990, B.B. Govinda Swami began an outreach program serving rice to people on pilgrimages. The next year, they expanded their service to include daily meals to widows in Vrindavan, and 100 elderly saddhus (religious renunciates). By 1995, the program multiplied to serve mid-day meals in 53 village schools. In 2001, in light of the increasing number of child beggars, Food for Life established ad hoc educational programs. The next year, a school named for Krishna’s teacher, opened on a small property.

Today, Food for Life Vrindavan’s schools serve 1,500 children, most of whom are female.  As a result of local cultural biases, girls receive less food, education, and medical care than their male counterparts. For many, the food they eat at school will be their only meal of the day. Without support, these young girls would need to work to support their families before being married off at an early age. It’s not uncommon for girls in this region to be forced into marriage while still a pre-teen. 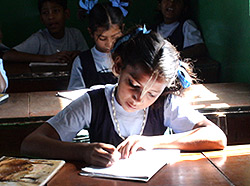 For many of the girls who attend the Food for Life schools, their lives are indelibly changed for the better.  Beyond learning to read and write, they eat nutritious, clean food, are provided with clean uniforms, and the non-profit also educates the families to discourage child matrimony. The aim is for each girl’s mind, body and spirit to be nourished, and their characters blossom.

Guru Nanak, spiritual leader of Sikhs, back in the year 1499, acknowledged the need to lift the level of respect for females in the Hindu-Pakistani subcontinent. “From her, kings are born. O Nanak, only the True Lord is without a woman.”

Born in Germany, Madi Das grew up in the Vaishnava tradition of Bhakti Yoga. He spent eight years in India before he moved to Ireland, and then the U.S. His life experience embodies a world of music traditions, and he is at home in both the devotional world of ashrams and the promotional world of film studios.

Das encourages people to donate directly to Food for Life, above and beyond the modest price of the album donation. As the father of young children, he recognizes that they “were so ridiculously privileged compared to the Vrindavan kids I grew up with,” which is why he was inspired to lend his voice and music production experience in a way that would benefit those less fortunate.

A release concert uniting Stringer, Das, and some of the female vocalists, who hail from all parts of the globe, will take place May 9 at Veda Yoga in Los Angeles.

To read or hear samples of Bhakti Without Borders, visit: www.kirtan-shakti.com or https://www.facebook.com/kirtanshakti.

Learn about Jai Uttal or Kirtan. Scroll through https://thenamastecounsel.com/yoga-blog/ or articles.