Boost Your Bhakti at Shakti Fest

You can even buy your blocks and mat at any big box store.

But the yoga that is so prevalent tends to be the physical component.  In fact, yoga is eight-limbed. Some of those branches may seem a bit obscure. Others, out of reach. However, it’s easy climbing. Especially if there’s a spotlight on them. Add in mega-stages and throngs of people loving their spirituality and you’re on your way. That’s Bhakti Fest.

The guy who brought Swami Satchidananda to Woodstock created Bhakti Fest, and its sister, Shakti Fest.

Shakti (divine energy) Fest is just around the corner.  Set for May 12-14, I booked my airfare last month. The next Bhakti (devotion) is in September. Both have a similar vibe to what I can only imagine was at Woodstock. But, on a much smaller scale. And, following yoga tenets: no drugs, alcohol, or meat. As a result, people from all over head to Joshua Tree, California, for these festivals. I’ve made it a priority for many years.  It’s my fix. It’s powerful professional development. And, permanent personal development.

The festivals are rooted in yoga, Kirtan, and meditation. If you’re not familiar what Kirtan (or Bhakti), read more on my blog.

Partial Line of Yogis and Musicians

Bhakti and Shakti Fest mesh traditional and non-traditional spiritual practices.  They are a smorgasbord for the yogi. I gorge myself on the music, chanting, and Bhakti yoga practices. Oftentimes, sleeping just a few hours under the desert stars. Unlike an all-you-can-eat buffet, you have to make hard choices. Siva Rea or Mas Vidal? Hemalayaa or Michael Brian Baker? Kia Miller, aerial yoga, or the Hanuman Chalisa? There are three concurrent yoga sessions (many with live music). Additionally, there are two stages for devotional music.  Then, there are five workshop areas including a Family Village, a Men’s Lodge, and a Women’s Dome. Plus, aquatic yoga, and holistic health practitioners offering massages, and more. For those needing to chill, soak up healing sound baths every evening.

Donna de Lory headlines on Friday. For many years, this spiritual vocalist toured with Madonna. Jai Uttal performs in prime time Saturday. Jai’s latest CD is both Beatles- and Brazilian-inspired. Closing out the night is Joss Jaffe about whom I’ve written in the past. Others include Sheela Bringi, Girish, Sirgun Kaur, Prajna Vieira, Johanna Beekman, and Saul David Raye.

As stated before, these festivals delve into the lesser frequented limbs of yoga. First, there are experts in Vedic astrology and Ayurveda.  Other workshops cover Sanskrit and the deities. Plus, advanced meditation and breathwork techniques abound. Finally, for many of the guest speakers, instructors or musicians, the branches intertwine.

From Mantra Meditation to Kirtronica 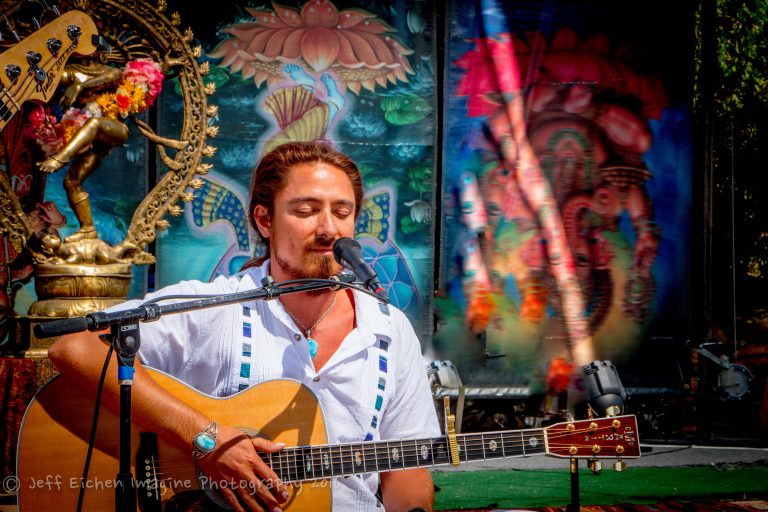 For example, Jaya Lakshmi and Ananda are leading three 90-minute yoga sessions. On closing day, they perform on the main stage.  Jaya Lakshmi and Ananda are seeped into meditative Kundalini mantras. Nonetheless, they can switch gear into Kirtronica — Kirtan meets Electronica. As such, their workshops aren’t about a child’s pose or Sun Salutation. The Oregon-based yogi/musicians, with 12 CDs, inspire via waves of movement, breathwork, and sound.

Ananda Yogiji explains, “My own yoga practice has been heavily influenced by the teaching of Kundalini Yoga as taught by Yogi Bhajan.  In this practice, there is quite a fusion of asanas with mantra meditation, bhakti, breathwork and more.  In fact, Yogi Bhajan taught kriyas, which oftentimes are a combination of all those things. Almost always the breath is linked with movement and also mantra.”

“The Bhakti portion really is about your own cultivation for the love of the divine,” he says. “I include that in my practice by singing, bowing to a deity, altar, the omnipresent God without form, or simply to my own soul.  I also love making offerings at my altar such as incense, flowers, and fruit.  There are so many ways to include these practices not only into your yoga practice but also in your day-to-day life. Ultimately, Shakti and Bhakti Fest are a super recharge to my devotional practices.  And they just get better and better each year.”

Govind Das and Radha are another married couple that blend music with mantras and movement. Their music, Bhakti yoga, and intensives have made a mark on me. They are the featured band on closing night. Plus, they are offering three yoga sessions infused with their live music. Additionally, Govind Das hosts a men’s workshop and the couple is holding a post-intensive. The latter includes dialogue, journaling, dharma talks, a silent meditative desert walk, teachings from the great masters, and the philosophy of Kirtan. And, always, plenty of music, mantras, and heart-opening Hatha flow.

Govind Das says, their intensive is “grounded in a rich and mellow devotional mood of gratitude, compassion, peace, and spiritual upliftment.” Their intensive is actually a satsang, or spiritually uplifting gathering of like-minded people. They motivate participants to reboot Shakti’s vibrancy — and learnings — into their daily lives,

Betty and Bill, are frequent Bhakti Fest-goers. The Canadian engineers created their own Kirtan band, Shanti Maya, fueled by satsang at Bhakti Fest, and elsewhere.

“You can’t say enough about how beneficial it is for the soul to come into the company of dozens, sometimes hundreds, of people who have gathered with the same goal,“ says Betty.

“I read once that every human culture that has ever existed on our planet had two things in common; they had music, and they sought a connection with the divine,” recalls Betty.  “Devotional music, the musical component of bhakti yoga, is that sweet place where these two most beautiful pieces of our humanity come together.”

She says Kirtan is a major draw.  But, it goes far beyond that.

“The music itself is blissful, and all the artists have their own unique musical styles that almost always keep us entranced. We all come in common purpose, and that is to feel safe and enriched in one another’s company,” says Betty.

”Shakti and Bhakti are a place to celebrate the Vedic traditions of India in a modern western setting,” adds Ananda.  “The mixture of chant artists, teachers, and presenters offer participants a wide flavor of teachings for their personal journeys.”