Our nation is best served through peace and unity.

Chant4Change presents a multicultural, multi-denominational 10-hour festival of music and spirit at the Lincoln Memorial. In San Antonio, a three-hour satellite event dedicated to healing and uniting the nation through song, prayer, and devotion will take place at The Union Hollywood Park.

At both, artists and spiritual leaders will perform sacred music and give talks countering the messages of hate and division that have dominated the 2016 election season.

In Washington, D.C., 20 musicians from across the country will engage thousands with their mantras and melodies. In San Antonio, Texas-based musicians who have toured extensively will join local artists to spark renewed energy and positivity prior to the November election.

Chant4Change was born from the visions of Gaura Vani, a master wordsmith, and rhythm maker. At the recent Bhakti Fest in Chicago, he shared his goals for Chant4Change, which sparked the San Antonio mini-fest.

The Storyteller, Poet, and Sacred Artist

In his captivating manner, he told stories, recited poetry, and played the mridanga, harmonium, and guitar as his clear booming voice chanted in many languages.

“I was born into his world like a baby with his eyes closed. But through grace, my guru has entered into my life like a magic physician. With the salve of knowledge, I’m beginning to see.”

Gaura Vani and his musical partner, Visvambar Sheth (Vish), were ashram babies. They were born into the Vaishnava culture, singing in English and Sanskrit from early years. Equally comfortable in the States or India, and with the music of both continents. That is apparent when they get on stage and get into their music. While they may be defined as Kirtan artists, their repertoire includes a Brazilian samba tune and a Negro spiritual.

“Lord Chaitanya gives us four instructions,” said Gaura Vani at Bhakti Fest. Those rules are just as valid today as they were when he was on earth, many years ago. “One should be more tolerant than a tree. One should be more humble than a blade of grass. To give all respect to others, and not expect any in return.”

Gaura Vani’s chant fest is designed to boost unity in diversity, and stimulate tolerance and love for all humanity. Chanting is the vehicle for expression, for several reasons.

He explains, “Music for me is a gateway to another vision of reality, directly connected to spirit. When I write a song, I feel like it’s coming from another place, like I am channeling it. The purpose of life is to love and to serve all of God’s creatures. I am eager to share that world with my audience, and I am eager to build a community of unity and diversity.”

Vish, who has a way of energizing crowds with his enthusiasm and his drum beats, confided, “I love to go where people don’t do chanting.”  He finds the experiences of newbies with chanting are like the “locks breaking away.”

“When you’re so excited about something, how do you keep it to yourself?” Asked Gaura Vani.

“We come into our lineage through Chaitanya maha prabhu (the great man). Sri Chaitanya broke all the barriers. Of class. Of religion. Chanting and dancing in the streets under Islamic rule. The love of God was being blocked. Like a dam,” he said, recounting the history of when Kirtan (singing and dancing) wasn’t allowed. 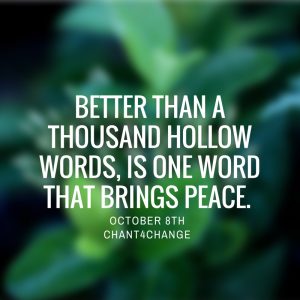 “Whatever background you come from, we share this chanting as the love of God. We have locks like that on the chambers of our hearts and some of these locks have been around for more than one lifetime. We can’t figure out how to open them. We’ve lost the keys several lifetimes ago. This mantra is like WD40. Let’s spray it in there.”

Chant4Change’s rally cries, and hashtags are #RaiseYourVoice and #ManySongsOneVoice. Their ultimate message echoes Gandhi. Be The Change.

“Chant music can be a powerful force for change. To sing together, we have to listen to each other.  Music offers a way to come together and to listen.  Sacred song is such a central part of people’s struggle. The situation we are facing as a globe cannot be solved alone. We have to listen to one another.”

For more information on Gaura Vani, Vish, or Chant4Change, read prior blog posts.