The Western Wall is considered one of the holiest places. It attracts people from all over the world, of different faiths, to pray here. During my first visit, the meaning and history behind the stones and traditions didn’t really resonate. My second trip was not the same. The divine energy was visible and palpable. I attribute the difference to many things. In part, I was in a different place in my life, and spiritual path.

A few months ago, I watched hundreds of women* filled with their own divine energy (shakti). They purposefully approached the wall. Fingers touched and caressed the wall. The ladies reflected all ages, religions, races, and corners of the world. With great intent, connected to divine energy, they found a space for their carefully written prayers to be sent to heaven.

Whether it was my personal prayer, intuition, current events, or the shirts worn by dozens of Brazilian Christians, I felt we were all one. Joining in prayer for world peace. Peace for Jerusalem. An end to conflicts.

After their time directly at the wall, the women slowly placed one foot behind the other, maintaining their hearts and eyes facing the divine energy at the wall**. Rows of females continued their reflections, sitting facing the sacred stones. Others entered a covered prayer galley. The sincerity was apparent in the faces, body language, and respectful clothing of all.

Two trips over a span of about ten years. Same wall and same traditions. The same passport I was carrying. But, not the same person. Neither my mind, body, or spirit grasped any of the divine energy in my first trip. Perhaps, I had built up my own wall of protection. 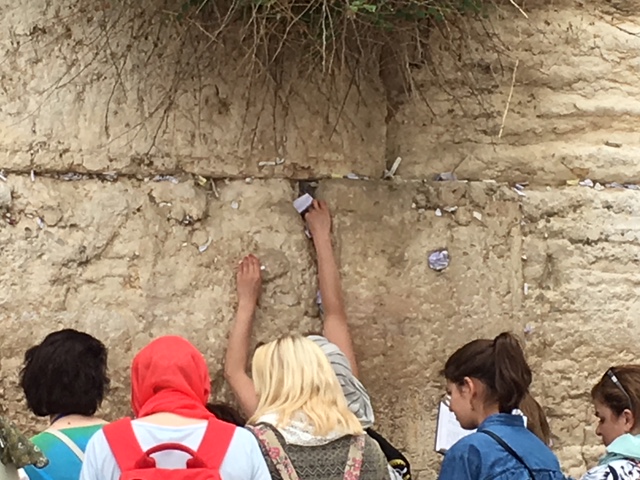 Pennsylvania-based pranic healer, Andrew Chapoy-Garza, explains part of the phenomena of the divine energy that people feel at the Wailing Wall.

“When I was trained as a pranic healer a number of years ago, I learned that energy follows intention. When someone writes a prayer on a paper that is placed in the Western Wall, the intention in it attracts the divine energy and vibrations from the Divine Source. This happens so much at a number of different holy sites around the world that portals of light are created in the midst of this present darkness.”

That energy is not confined to the Western Wall. I learned the same concept in my Reiki trainings that spanned nearly ten years. Just like the Wall, my Reiki attunements didn’t give me automatic entry to divine energy. What I felt in my hands after my first Reiki training, was similar to what I felt at the Wall on my first visit. However, by the time I reached Reiki Master, likely, I allowed myself to connect to the divine energy. Long ago I was taught each one of us has the same powers. What we do with them is the difference.

Andrew further shares, “In the spiritual world, I believe we experience this (divine energy) within ourselves every time we meditate, chant or pray. These are wonderful powerful ways to reconnect with the Divine Source. The Western Wall is one of these places of spiritual energy exchange just like the Kaaba in Mecca for all our devout Muslim brothers and sisters.”

Generations of Humans Have Prayed at the Wall

Fellow yoga instructor, Steve Rubin, of Orlando, Florida was far better attuned than I was during his first visit to the Wall. He spent two hours watching, praying, and crying.

“It was a very special/charged place,” he recalls. “All the prayers that have been shared there for so long made it a very tangible feeling — very strong — at least for me. I could feel the timelessness of humans and our prayers. It brought me to tears instantly, as soon as I laid my hands and head on it, which is not something that happens so quickly for me.”

Furthermore, it was an instant humbling for Steve, who is a very well-traveled spiritual yogi. He attributes the divine energy, in part, to “the generations of Humans for so long pouring sincerity and prayers into the wall.” Additionally, he felt a connection to his own Jewish roots that he had not felt before while in Israel.

The Western Wall is the most sacred construction for the Jews. But, what made an impact for me was seeing the large number of non-Jews sharing in the practice of prayer at this holy site. A kids’ brochure, simply, with lots of colors, explained how “Jerusalem is the city that brings everyone together. Adults and children from around the world come here to visit, to touch, to feel, and to pray.” The same Creator, whatever one may call it.

Where God Created the World

This area (Temple Mount or Mount Moriah) is where Herod declared, “whomever has not seen the temple, hasn’t seen a true beauty in his life.”

Even more impactful, some believe that Mount Moriah is where God created the world. Certainly, it’s hard to imagine man building this wall without a whole lot of divine energy. The entire wall extends 488 meters and was at one time up to 60 meters high. Much of the wall is underground, so what is visible is just a part of the enormous structure. Then, consider that part of the wall is comprised of massive meter-deep stone frames. Each weighs 570 tons, measures 40 feet wide. With today’s technology, the best crane in Israel can’t move these stones. Furthermore, each piece is carved perfectly, and set in place with no mortar.

Home for All Nations

Isaiah called the temple “a home for all nations,” or a spiritual gathering place, regardless of one’s chosen religion. That’s what one sees today, thousands of years later. Albeit one wall that has withstood earthquakes, ransacking, fires, and destruction by the Romans, Moors, and Babylonians. It was covered up by the Muslim quarter built on top of the ancient temple. Then, politics attempted to obliterate the wall.

In 1948, with the emergence of the State of Israel, this part of Jerusalem was occupied by Jordan. No Jews were allowed here. When Israel took over in 1967, the wall was made accessible to all, and the area was consecrated as a temple with space for 60,000.

Not surprisingly, today, it is the most visited place in all of Israel.

* Not unlike traditions at many Indian temples, men and women pray at separate areas at the Kotel.

** Again, as in Hindu traditions, when one’s back is not to face the deities, the same etiquette is practiced at the wall.

As I left, I took a Spanish-language brochure.

Translation: Everyone is equal in front of the wall. Touching its stones connects us to a nation and a legacy. What’s not important disappears. The wall has witnessed times of war and times of peace, destruction, and rebirth.