Recipe for feeling blissful in India. Start with a small town. Next, be sure it’s sacred. Far from an airport. No railroad station. Temples and ghats (ceremonial bathing spots) are everywhere. Finally, for the icing on the cake: no alcohol or meat anywhere in town.

I knew Pushkar would be a special, place. But I had no idea that I’d feel so blissful here. Especially since my first two weeks in India were hectic, running from one place to another. Buses. Planes. No sleep. Maybe my Pushkar hostel boosted my blissfulness by being away from the center of town, surrounded by green crops and trees.

Pushkar was a charmer. I felt blissful here. As did others.

I chatted with a New Yorker at a Pushkar outdoor cafe. She seemed super blissful, despite the jet lag. She arrived in India and headed straight to Pushkar. This was not her first, or even second, time here. She knew what she liked. Pushkar. Hence, she came here as soon as she could.

She said that Pushkar has a special energy. Hence, she was in no hurry to go anywhere else in India.

While much of India moves at lighting speed, Pushkar has a slow flow vibe. You can easily chill at a cafe. At a temple. A ghat. Your guest home. Or, in the marketplace.

My high five for being blissful was a visit with the potato baba, about eight kilometers outside of Pushkar.

Aloo Baba has survived eating only potatoes, for 25 years. His ashram is, in part, in a cave. Way off the beaten path. It’s a good guess that American women rarely visit with the Baba. While he spoke no English, and there were about eight other men seated on the ground around him, I felt pure bliss in his presence.

Aside from feeling blissful with the Aloo Baba, another area where mylevel of bliss was extremely high was at the Jain Mandir (temple). 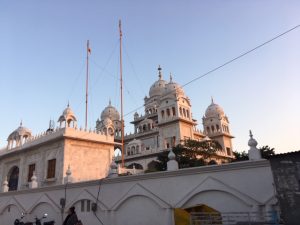 Perhaps the abundance of bliss in this town is a result of the holiness? Or, the fact that there’s a temple almost at every corner. It’s a place for pilgrimages and there are temples galore here. 400. And, the last census counted about 250 households.

Whether it’s admiring the temples from the outside or watching the devotion from inside, the sacredness fills the town. Or, does it diffuse outward from the center of the town. The lake. This is where blissfulness — and holiness — is even more evident. Pushkar Sarovar (lake) is surrounded by 52 ghats. Not for splashing around, the ghats facilitate immersing oneself for a spiritual cleanse.

The Holiness of Pushkar 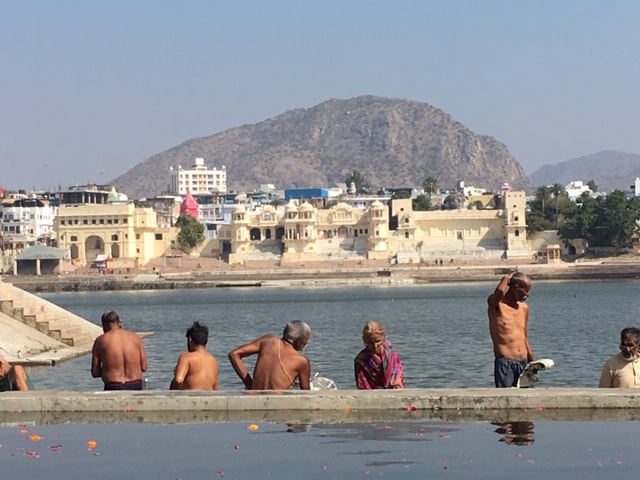 In Varanasi, the ghats are like a string of pearls on the shore of the Ganges River. In Pushkar, the ghats are 52 beads of different shapes and sizes that surround the lake. I was definitely blissful hanging around one of the ghats, getting blessed, and hearing stories about the legends of Pushkar.

“Vishnu made tapasya (a commitment to an austere spiritual life) here for a long time. Then, water came out of his body to form a lake. Originally it was much bigger. But during Kali Yuga (the age of darkness) it shrunk,” an elderly Brahmin explained to me. Additionally, he said that one of the three mountains in Pushkar, visible from almost anywhere, is called Nag Parvati (Lord Shiva’s wife and mother of Ganesha). He tells me it’s in the shape of a sleeping cobra (nag).

“Vishnu was sleeping and then meditating, and a lotus flower came out of his belly. That’s how Brahma (the supreme God of creation) was born. Said ‘tap, tap, tap.’ And Brahma meditated for 60,000 years on the lotus flower. Vishnu said to Brahma, ‘what’s the purpose of meditation?’ Brahma said, ‘I come from the lotus and I want to make a new universe.’ So one lotus flower became Brahma, and from the heaven, he threw the lotus and wherever it falls, this is your place.”

Surely, that’s why this lovely city is called Pushkar. Pushpa means lotus flower. Kar is a symbol for hand, or, doing/making/causing. Like Kar-ma.

Thereupon, “Brahma said, ‘I am born here, and want to make a puja’ (fire ceremony). But ceremonies require the spouse, and Savitri was late.” Like most women, the Brahmin laughs. So, what was he to do? Find another wife.”

What’s more, Indra, the rain god, or god of the sky, was also at the puja. Brahma enlisted him to find him his next consort.

“A gopi gave grass three times yielding a cow each time.” While Gayatri is the name of one of the best-known mantras, it literally means three cows. Furthermore, according to legend, Gayatri was the consort sent down from the heavens by Indra, to fill in in Savitri’s absence.

“Brahma’s son, Narada, brought Savitri down from the heavens. Savitri said you can only do a puja here.”

In the end, better late than never. Enraged that he wasn’t going to wait for her, she put a curse on Brahma so that others would no longer worship him. In reality, this is one of the few Brahma temples in India.

Unquestionably, the woman had the upper hand.