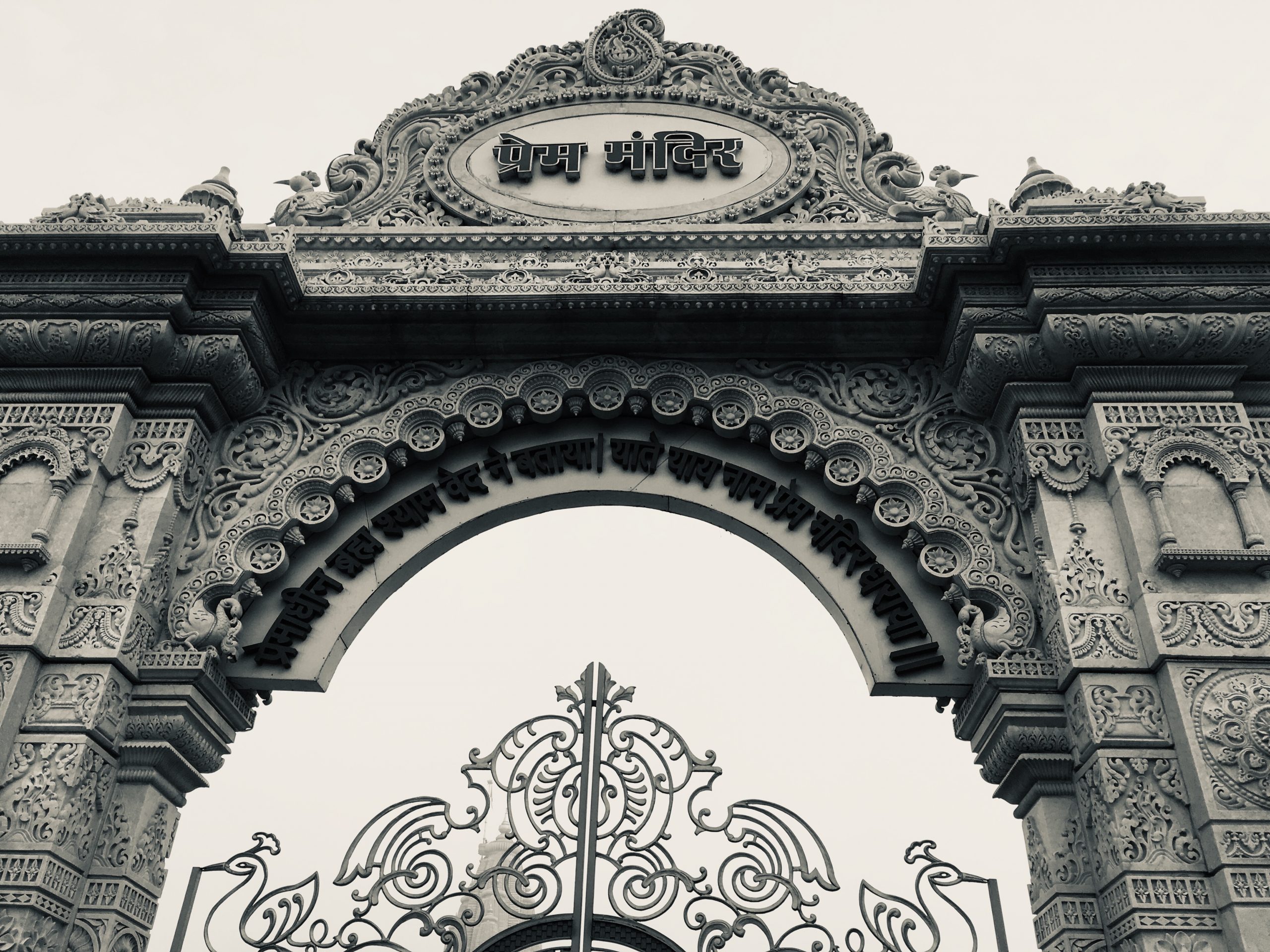 Linguists say people need to hear a word repeatedly before it’s secured in the brain. That’s why I’m returning to one of the holiest historical cities in India: Vrindavan. Despite all the note-taking during my first visit, I need a refresher course. I don’t want to skim the surface. I want the Lilas (stories) and learnings to be engraved in my mind.

After my first visit to Vrindavan, I wrote a series of articles, "Men in Orange." In one,  His Holiness Radhanath Swami detailed many examples of why people are motivated to visit this sacred center.

Following is just one of Radhanath Swami’s reasons to visit Vrindavan, along with thoughts from four others.

A city of grace

Radhanath Swami is a best-selling author and founder of numerous charitable initiatives in India. I’ve sat on floors in India, Italy, California, Chicago, and Wisconsin listening to his lectures. Live. In-person. Up close. He speaks simply, but profoundly.

“The power of grace may be the greatest power. This grace which is the extension of God’s love can heal. The grace can intervene and bring light to where there was darkness. Even when there's such misdirection.

“Vrindavan is a place emanating this grace. Not only is it almost synonymous with Krishna, but neighboring Barsana was the home of Sri Radha — the supreme reservoir of love.

“The founder of ISKCON, Srila Prabhupada, said, ‘if one chants the names of the Lord sincerely, without any ulterior motives, and practices bhakti (devotion) in that spirit, we can tune into that grace.’ The path of bhakti is to access that grace by humility and devotion. Thus, we cleanse our heart through the path of bhakti.”

According to Radhanath Swami, the material fades away and grace and devotion are everywhere in Vrindavan.

“Human beings are not meant to be like computers that store data. We are not infallible memory chips. Theoretical knowledge has no true value unless it brings realization. The purpose of knowledge is to bring wisdom.

“Nothing is material. Rather, the energy of the supreme. Just as a shadow is the absence of sun, we recognize there is a sun that causes the shadow. Likewise, to focus on the material is to forget God’s spiritual energy. We can turn that around through seva (selfless service). To really care about others. Make sacrifices for others.

“Each and every one of us is limitlessly beautiful because each one of us is reflecting the dignity of our creator. We are all emanating from that same sun. Unity in diversity. In our real world, everyone seems to be looking for pleasure and trying to avoid suffering and pain.”

A city of smiles

When the focus on materialism fades, and spirituality and devotion are front and center, there is a dramatic shift. In a place like Vrindavan, seeped in sacred stories, that grace permeates everywhere and to almost everyone.

Like Radhanath Swami, Parabhakti Dasa acknowledges that there are so many reasons to visit Vrindavan.  But one thing that stands out for him is the subtle and sacred sweetness that visibly flows through the people. He is touched by the fact that when he’s in the sacred spot that was once Krishna’s playground, he can “find Krishna’s and Radharani’s smiles in the faces of Vrindavan's residents.”

From the time he was an adolescent, Parabhakti had a deep desire to know more about India and spirituality. For the last 18 years, Parabhakti Dasa (Mauro Bombieri) has been the president of Villa Vrindavana.  I was fortunate to spend a month at his center for devotion and learning. The ashram is set among 220 acres of peaceful hills and a small lake near Florence, Italy. Within Villa Vrindavana’s 16th-century mansion is a museum of sacred art, a guest house, a restaurant, a yoga center, and a gift shop.

A city of devotion

Speaking of smiles — I chose to travel to Vrindavan (both times) with women with giant contagious smiles. Shivangi and Shivani Agarwal lived in Delhi until age 28 when they moved to Chicago. For six years, the highly-spirited cheery twins have organized and led thought-provoking, and fun, spiritual tours to India.

“Vrindavan is the holiest of all holy places for the aspirants on the path of bhakti,” says Shivani.

“The holiness and the atmosphere of Vrindavan are imbued or surcharged with devotional vibes. Being in the sacred land of Vrindavan, the soul’s longing for happiness can truly find shelter and solace, provided the visit is with an open heart. The power of being in the land of Vraja can be truly transforming for many. One naturally feels spiritually nourished, uplifted, and empowered to take to the spiritual practices deep into their hearts with utmost dedication and commitment.

“The rivers, the trees, the tales, the devotional hymns, the temples, the monkeys, the festivities, and the devotees of Krishna all add to the beautiful experience of being in that place.”

That’s why the theme of the twin's next trip is Embrace the Grace. Their goal for their travel companions “is very much centered around this principle of opening one’s hearts to receive the love and reciprocation moment to moment. ‘Seek and you shall find,’” says Shivani. Especially in Vrindavan.

A city of saints 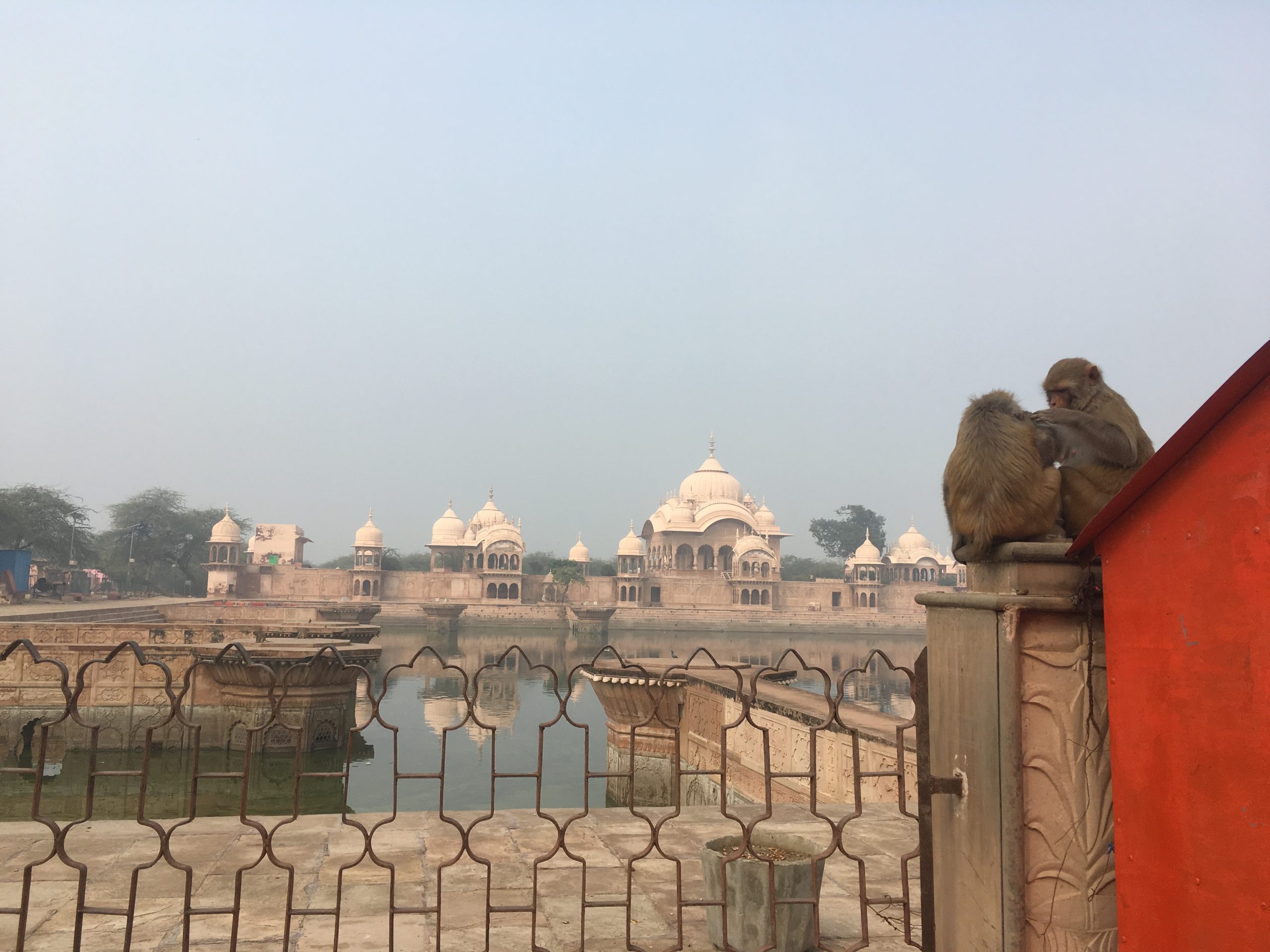 Adam Bauer is a bhakti musician who has traveled to Vrindavan about 15 times. He’s tuned in to the secrets and sagas.

According to Adam, being in Vrindavan is like living within the scriptures. You are in Krishna’s playground. The scene of the all-attractive child’s youth is the most celebrated stage for Hindus around the globe. “It’s the heart of the historic Vraja region where the Divine Lilas of Radha and Krishna and the gopis (cowherd girls) took place, as described in scripture in the 10th Canto of the ‘Srimad Bhagavatam.’”

Nearby Govardhan Hill is a breathtaking must-visit. Legend says Krishna held up the mountain to protect the villagers from a devastating storm. Tiny Krishna miraculously and effortlessly kept the ridge atop everyone like a roof.  With just one pinky. For seven days.

Today that site “is the most circumambulated hill on the planet,” says Adam. “Especially during the full moon. It’s an unforgettable experience to participate in.” One that is on my bucket list.

Adam points out that Vrindavan is a pilgrimage spot to venerate not only Krishna and Radha, but modern-day saints too.

The life teachings, and spirit, of Neem Karoli Baba transformed Adam’s life. That’s why he honored "Maharaj-ji" with a song on his “Return to the Sacred” CD. Although his guru’s primary ashram was in Nainital, many found solace and inspiration at the Vrindavan temple where the master left his body.

Shortly after the Beatles found enlightenment in India, countless others headed to the subcontinent. Many stayed at the Vrindavan ashram “as their American nervous systems were getting rewired by Baba and bhakti,” says Adam. Fortunately for our society, they “returned home to change and upgrade America with what they’d experienced” at the ashram.

Among those impacted by Mahara-ji in Vrindavan were Ram Dass, Krishna Das, Shyamdas, and a quarter century later, Adam. All spread the saint’s message of oneness and devotion through their spoken, written, and/or recorded words.

A few years after Neem Karoli Baba’s passing, a female saint left the physical world.  Prime Minister Indira Gandhi attended the funeral rites of Anandamayi Ma who was deemed a deity or god re-incarnated. Popular among people from all faith backgrounds and countries of origin, she said, “Whether you worship Christ, Krishna, Kali or Allah, you actually worship the one Light that is also in you, since It pervades all things.”

The simple but inviting Shree Shree Ma Anandamayi Ashram sits along one of the main roads in Vrindavan.

A city of temples

Saumyodeep Biswas is a very talented young school student in Kolkata. Aside from still lifes, he paints images of intricate modern street scenes as well as sacred images of Krishna. That’s one of the reasons he’s planning to visit the holy city.

“Vrindavan is actually a famous auspicious place renowned for the temples and shrines dedicated to Lord Krishna,” he says. “I want to visit to have a look at the famous pilgrimage sites.”

In fact, there are more than 5,000 temples here. Adam Bauer adds that “Vrindavan is filled with amazing old temples like Banke Bihari, Radha Raman, and the unique Gopeshwar Mahadev Temple. One could spend many moons exploring and enjoying the various houses of worship there.”

Some are enormous modern complexes. Currently under construction is an ISCKON temple that will be the tallest in the world. And then there are powerful prayer spots that most foreigners would only notice for the tiny monkeys perched in the trees and ledges.

I'm counting the days until I'm in Vrindavan. As the monkeys sleep, I'll walk to the resplendent Sri Sri Krishna Balaram Mandir for pre-dawn services.