Hanging Out, Down Low

In my yoga classes, I frequently have my students hang out in the squat, malasana, for a while, and then invite them to work their way into kakasana, or the crane pose. I use malasana as a starting point for kakasana, to help keep form and facilitate getting into the more challenging pose.  But the greatest reason for malasana, is that in our modern-day lifestyles, we have invented so many things that our ancestors did not have, that as a result, we lost hip flexibility, leg strength, and even ankle flexibility and durability.

A naturopathic friend of mine, decades ago, urged me to get in a squatting position for at least five minutes a day to prepare my body for childbirth.  The squat, she said, prevents the episiotomy, which is now done in hundreds of thousands of “natural” childbirths today. My friend explained that in traditional societies, women work(ed) in the fields, squatting, stretching out the perineal area. Today, women spend endless hours on high stools, chairs, and couches. Rarely do they even attempt to squat.

Back when my daughter was born, episiotomies were routine.  They’ve backed off, somewhat, on the knife now. A 2005 study found that one in three women in the U.S.  and 80 percent in Portugal “required” an episiotomy during vaginal birth. Yet, when midwives assist in the U.S., less than three percent of women are given episiotomies.

When my daughter, now an adult, came back from three months in Japan, she told me that young people socialize in the streets, squatting, for long periods of time. It was natural. And comfortable.

Forget About Chairs and Sofas

In India, sitting on floors is also natural, and the food prep workers I saw daily did everything squatting or sitting on the floor. At an ashram stateside, where I’ve spent a considerable amount of time, there was one lone sofa (no chairs) in a library on the premises. When a few people were resting on the couch they were chastised. “Don’t be tamassic,” the swami warned. Tamassic is one of the three Ayurvedic gunas, that I equate with lethargy and decay, as in eating meat or fermented foods.  That warning stuck with me.

The tamassic qualities of sitting in chairs or couches, also lead to poor posture. Sitting on the floor, or squatting forces you to keep your spine straight. To help people lead healthier, sattvic lives, Yin yoga instructor, Denise Kaufman, is telling people to get on the floor. She has a website and a Facebook page.  She attributes chair sitting and couch potatoing to the billion dollars a year spent on back pain. 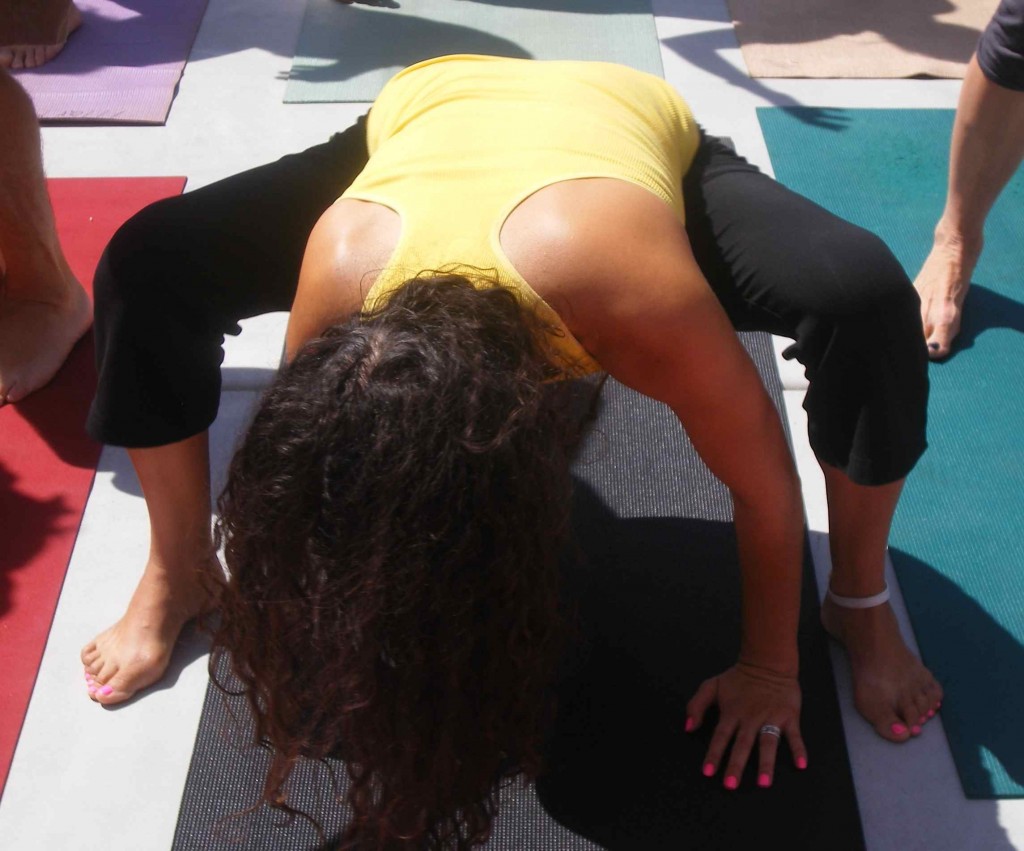 I’ve had chronic lower back issues since I was an adolescent. Back then, I spent way too much time lounging on a couch watching TV. Today, I rarely watch my one remaining “idiot box,” as my mom called it. At home, or in public places, I typically sit on a hardwood chair, but with my legs crossed, Indian style, or in yoga’s “easy pose,” sukhasana.  I like the Sanskrit name, as it’s pronounced like the Spanish su casa, which reminds me that that’s how I should sit in su casa or mi casa.

When I go to a restaurant, I typically request a booth to allow me more room and comfort to sit cross-legged, as well. I find that if my legs are hanging down in a chair, it brings tension to my lower back. If I head for a couch, I’m in sukhasana, to keep my hip flexors open, and to relieve pressure on my back. Many people find sitting on a cushion, on the floor, is more comfortable, to elevate the hips higher than the knees. However, I’m more comfortable with my hips level with my knees. For those that find squatting difficult, Kaufman has a video on her website with modifications for those not used to hanging out close to the ground.

As our society “advances,” we end up losing so much.  Fortunately, there’s an easy fix to the back pains and poor posture, unneeded episiotomies, and even varicose veins. Hang Low.