I’d like to think that humankind is benevolent.  But listening to newscasts leads me to believe our society is going downhill.  This week’s newspaper headlines remind me of avidya (ignorance) and maya (illusion/deceit). As the old song goes, “What the world needs now is love sweet love.” And, guidance from the rishis (sages). Just, maybe, what the world needs now is yoga. An International Day of Yoga.

Thousands of years ago, the sages didn’t need microchips, lasers, or microscopes to know right from wrong. Nor did they need double-blind clinical studies to test their theories on life sciences. They witnessed, firsthand, how one could achieve physical, mental, and spiritual wellbeing by sitting still and breathing.  Today’s researchers have proven the wisdom of the rishis. The 5,000-year-old practice of yoga is an invaluable teaching. It can prevent and reverse physical and emotional ailments from depression to cardiovascular disease. You name it, researchers have found, yoga helps.

The sages predicted the age of kali yuga: the era of evil and destruction. In these ages, increased challenges and suffering surround us.

One antidote is yoga.

Yoga is transformative. We’re not talking about building the quadriceps or lengthening the hamstrings. Rather, living a righteous life. The five principles of yoga are called the yamas. Ahimsa (non-violence). Satya (truthfulness).  Asteya (non-stealing). Aparigraha (non-greediness). Brahmacharya (control over our physical desires). The rishis were the original new-age personal growth gurus.

Yoga to the Rescue

Recognizing how the influence of yoga on individuals, and humanity, can bring about positive change, Carlos Gomez, director of Yoga Day Nonprofit is bringing International Day of Yoga to San Antonio, Texas.

The Honorable Indian Prime Minister (and yoga practitioner), Narendra Modi, championed the Day. He praised yoga as an “invaluable gift of India’s ancient tradition.”  Modi said yoga “embodies unity of mind and body; thought and action; restraint and fulfillment; harmony between man and nature; a holistic approach to health and well-being. It is not about exercise but to discover the sense of oneness with yourself, the world, and the nature.”

Last year, at the first International Day of Yoga, PM Modi led 35,000 in an asana and meditation practice in New Delhi. As India led the largest group yoga practice, ever, children and adults participated in similar events across the globe.  Texas was on board, too.

Anupam Ray, the new Consul General for India in Houston, will make his first visit to San Antonio to be the keynote speaker. Ray was a neuro-surgery resident before he joined the prestigious Indian Foreign Service in 1994. This elite service recruits only 20 people annually, from a pool of approximately half a million aspirants. Before moving to Houston, Ray was in Kentucky. During a two-year sabbatical from the Service, he served as Visiting Professor at the Patterson School of Diplomacy and International Commerce. 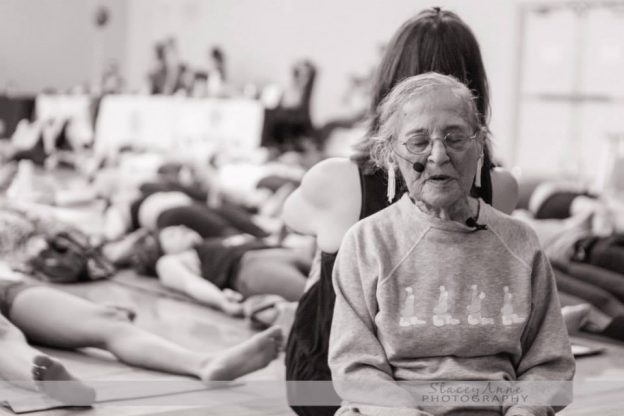 Another highlight of the day will be Esther Vexler. San Antonio’s 97-year-old godmother of yoga will lead savasana (final relaxation).

The youngest of eight children, Esther studied dance and then earned a degree in English from Berkeley. She spent much of her young adult years volunteering for charitable organizations. In 1963, John F. Kennedy invited her to Washington, D.C. to attend a meeting on civil rights and women’s roles. At the age of 50, she began her commitment to teaching yoga. Today, many yoga instructors in Texas are graduates of the non-profit Esther Vexler School of Yoga.

For more on the San Antonio event, visit http://www.idoyogasa.org/. For statewide consulate International Day of Yoga activities in June and July, read here.