Journeys in India with Men in Orange Part 1 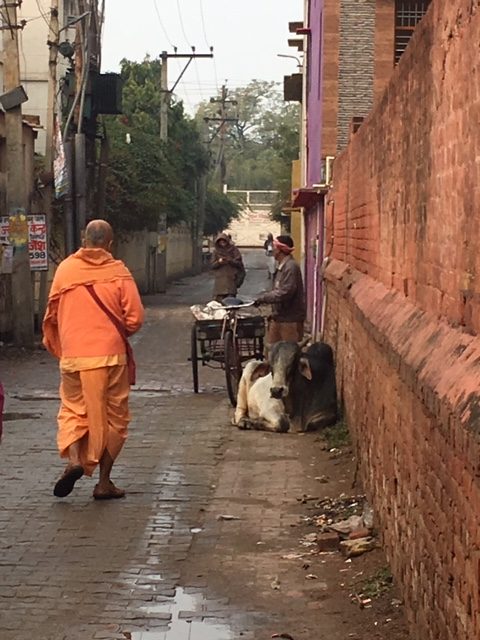 Let it be known, I have a short attention span. Think 60 second sound bytes or max five-minute comedy schticks. My body needs to move frequently. I can walk for eight to ten hours and feel great. But sit me down to listen to a talking head, even as part of my journey to India, and I can zone out like a six-year-old.

So, shortly before take-off from the Austin airport, I opened a WhatsApp message that said classes with monks were now part of my EMBRACE THE GRACE: SACRED JOURNEY TO DIVINE INDIA tour. My instant reaction was “snooze alert.” And, no clicker to turn it off.

We’re not talking about the traffic cop or crossing guard orange.

A muted blend of red and yellow. Saffron to be precise.

The colors Buddhist and Hindu renunciates don, who opt for simplicity in life. Celibacy. Detachment.

In lieu of physical desires for people or things, they focus on love for a higher being. A spiritual life.

Focus on learning, and/or teaching. Those treasures can’t be kept in a bank account or safe. But, they can be shared among all who open their minds.

Two orange-clad spiritual luminaries were on the road with us for more than a week. The reason being, “A holy place has to be seen through ears,” according to trip leader Shivani Agarwal. “This is an important aspect of spirituality. Otherwise, a visit to these places is reduced to a picnic spot. Their significance and relevance can only be understood if we get education by those who have understood their significance and relevance. This is how knowledge is transmitted.”

Surprise. The time with the men in orange was the highlight of my journey to India.

Shyamananda Das and Chaitanya Charan were born and raised in India. They each chose the monastic Vaishnava life about three decades ago. Both began their adulthood with sharp inquisitive minds. Chaitanya was an engineering student who scored 2350 out of 2400 on his GREs. He worked as a software engineer before he gave up the material life. Nicknamed the Spiritual Scientist, he’s authored 25 books and has 750,000 followers on one of his Facebook pages.

Shyamananda, in the meantime, translated many books authored by ISKCON’s founder, Srila Prabhupad, to Marathi. Additionally, he serves as ISKCON Chowpatty (Mumbai) temple president, and, he travels to England and the United States frequently to lecture on spirituality.

Men in Orange regarding misconceptions of religion

People are to God what sparks are to fire.

We are all parts of God. All equal but not identical.

At a spiritual level, we are all the same.

All religions lead to the same God

Disagreements on religion have been the source of strife for eons.

If religion is supposed to be such a beautiful part of one’s life, then why are so many mistreated —and murdered— in the name of religion?

Religion should be a personal choice.

We all can choose options for our own spiritual journal. One is not a better approach than another. Mine is not right, and yours is not wrong.

Jim may have set beliefs as a teen, and they evolve when he becomes a father, and then he may experience an about-face when he retires.

Temples used to be for wisdom and spiritual healing, not unlike today’s hospitals and schools.

Regardless, we can still seek that higher ground.

In fact, as we evolve spiritually, our choices become wiser, no matter what lineage we may select.

Journey to the top–only one mountain to climb

The base of the mountain is expansive, almost infinite. Yet the top is simple and clearly visible from so many different angles. Hence, the climb up has infinite possibilities. After the long trek up, everyone’s view is the same. The same holds true for the spiritual journey. The view from the top, of the supreme being, varies little. Regardless of the religion, language, or the name, the creator has much the same qualities.

Breaking it down etymologically we see more similarities. The name Allah means “the Being who comprises all the attributes of perfection.” Brahman is the “source of everything,” and Yahweh is “to exist or to be.” Meanwhile, El Shaddai is the “all-powerful or mighty one,” and the word Krishna means “all-attractive.”

None of these names are saying, “the only one,” or, “the master,” The word Krishna, clearly, has nothing to do with sectarianism. And, you could argue the same for other names of the Lord.

God is not material

Religions have created images to personify their God, not unlike a flag as a symbol of one’s country. People salute their flag just as they may bow down to their God. We pay respect to the image to make it more tangible.

Chaitanya explains, “When we think of God’s form, we subconsciously project our conceptions of matter on the form of God and so think that a form would limit God. But God is not material; he is entirely spiritual. Spirit has characteristics different from matter; that which is spiritual has the potential to be unlimited, irrespective of whether it has form or not. So God’s form being spiritual does not limit him.”

What is God’s form?

Gender is about biology. But, if God has no body, how can we assign gender?

We are told that God appeared as Krishna in Vrindavan. This image may have been male, but the God as depicted in the Vedic scriptures represents masculine and feminine. There is no question of superiority between male and female. Krishna and Radha were originally one person. Hence, God can be manifest as a loving couple. Yet, interestingly enough, the feminine is mentioned first, i.e., Sita Ram or Radha Krishna. Taking it further, in Vrindavan and Barsana, India, it’s common for people to greet one another with “Radhey Radhey!”

This is because we worship Radha more than Krishna. “Radha controls Krishna. Therefore, she is the controller of God,” as the sun versus sunshine, say the monks. “Man cannot be apart from woman. They must complement versus compete with one another.”

Speaking of the men and women, stay tuned for the next installment of Journey to India with Men in Orange. Topic: Love.