In India with Men in Orange Part 3: Karma

When you take your driver’s license test, or renewal, in the United States, you may be asked what the color orange means. Caution. Possible dangers ahead. Construction.

For many in the spiritual world, orange can have a similar meaning. Caution, and beware of possible dangers i.e. maya (illusion) and ego. The construction, however, can equate to a never-ending search for self-realization, selflessness, and dedication to a higher being.

During my recent travels in India we spent a lot of time with men in orange. Most noteworthy were two monks that traveled with us from Mumbai to Delhi, to Vrindavan, Mathura, Agra, Govardhan, and back beyond Mumbai to the Govardhan Eco Village. Like driving in unknown territory, without GPS, they steered us to better understand some of the simplest, yet most complicated, things in life like love and religion. Another topic they focused way be simple for some cultures, and difficult for others (like Westerners), to understand.

The two men in orange leading us through the construction zone on our sacred journey were Shyamananda Das and Chaitanya Charan. Both men grew up in India and chose the monastic Vaishnava life as young adults. Chaitanya was a top-ranked telecommunications engineering student. Nicknamed the Spiritual Scientist, he’s authored 25 books and has 750,000 followers on one of his Facebook pages. For his part, Shyamananda has translated dozens of spiritual books to Marathi, a language spoken by 71 million people in India and beyond. Additionally, he’s a frequent contributor to Back to Godhead, the magazine of the Hare Krishna Movement.

The following are synopses of one of their discussions on the laws of karma.

Karma Can Be Empowering

Karma “helps us put destiny in our own hands. We have a vital role to play that includes acceptance and confidence,” explains Chaitanya Charan.

Karma, at one level, is individual. But we live in an interconnected world. Therefore, what others do affects us. Likewise, what we do affects others. Everyone is responsible for their actions. The more you share, the more you are given.

Don’t shoot the messenger. Enrich yourself. Open your mindset. We have free will. We are the makers of our destiny, but not the masters of our destiny. Many are still fighting battles that are already lost or beyond their control such as a handicap. But the response is within our control. Luck is a name people give to hard work. Meanwhile, stress, or being stuck living in the past or unable to release worries are emotional mortgages.

Don’t Be Angry with the Instrument of your Karma

There’s a difference between weakness and wickedness. All of us have weaknesses. On the other hand, wickedness involves cold-blooded action. For some, intelligence becomes a slave to the lower self, using intelligence to do wrong and cover tracks. Another way to think of it is how the mind can have a short-term impulse (which can result in wickedness or weakness) versus long-term intelligence which can redirect your karma.

The human spirit is always reformative. The door to change is from inside. The desire to change has to begin with an acknowledgment of wrongdoing.

If you look at nature, beauty and brutality exist side by side. Benevolence of the universe is our positive karma. The universe at one level is neutral. But God cares for us and brings good. God gives us gravity and can remove it.

God is Beyond the Law of Nature

Miracles do happen provided we have the eyes to see. We need to stop hiding in our caves. Once you’re out, you don’t need a candle or flashlight to see where the sun is. When we use our spirituality, we can become enlightened, as if the sun’s rays are shining in our path.

There are people called stress dumpers, one of our monks explains. “They have a never-ending supply of stress.”

Any path which makes you lose your self-worth is not intended. The North Star always stays where it is. You need to keep your head firmly screwed on your shoulders.
Priest in Varanasi, India 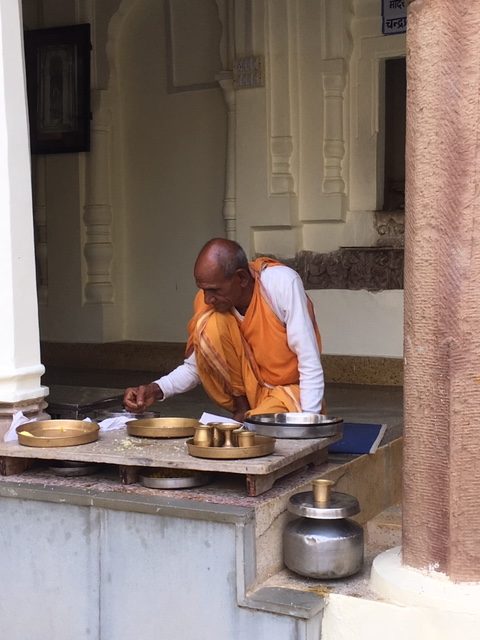 In many tribes of the Amazon, they had an understanding that every tree is for our benefit. Now, suddenly they’re giving contracts to lumber companies. Culturally, things keep on changing. So karma will have to come into play.

For many creatures in the jungle, the best defense is to play dead. There is no cure for why something happened to you. But, being a victim today, does not mean that one will be a perpetrator tomorrow.

Sometimes, something feels so wrong, that we can’t accept that it was God’s doing. These are instances when we have to recognize karma’s role.

We may ask, “Why would God destroy something good?” Whether it be a force of nature, or war, or another form of tragedy.

God’s Mercy is Greater than His Justice

Sometimes, strong punishments can serve as deterrents. For example, since India and Pakistan have each had nuclear weapon arsenals, there has been no major war between the two countries.

In Vedic tradition, kings at times would resort to capital punishment. A king would recommend capital punishment to square up a criminal’s karma. The rationale was that the kings had to train people to choose positive over evil.

Maybe that’s why vigilante movies are so popular. They touch a nerve. Karma in action. Recognizing that every good, or bad, deed goes into your account. On the other hand, sometimes, doing good gets us into trouble. But, we get a deeper experience. So, positive karma is still on our side.

Every Saint Had a Past and Every Sinner Has a Future

In today’s world, when a crime is committed there are three victims. First, the victim. Second, the victimizer. Third, is our society or community.

We must understand, everything, good and bad, is part of life. Nothing that Krishna does leads to misery, but if we try too hard to enjoy something, even as innocuous as eating too many ice cream cones, we will feel misery.

Finally, another man in orange on my journey, Indrayumna Swami, works with the incarcerated. Author of “The Holy Jail” and “The Forbidden Voices,” he says peoples’ karmas can be changed. “It’s a wonderful way to reach the hearts of people that are considered persona non grata. They can start to relate to other people more. It’s transformed them inside and outside. Karma is very difficult. No one is born with a clean slate. But in the spiritual world, there is no past or future. Just present. Learn from the past. Live in the future.”