My Sivananda Yoga roots ingrained in me the importance of karma yoga. Some call it seva. Both expressions mean selfless service. Helping others, mankind, or nature, expecting nothing in return.

It’s easy for me to perform service. What’s hard is to not expect anything in return. I’m not talking about monetary remuneration or an IRS break. But, inherently, when I — or most people, try to do good deeds, we are rewarded a blast of contentment. Not that we necessarily do the deeds to feel good, but we can’t erase the fact that we will reap some benefits.

For the last five years, I’ve been doing karma yoga in Mexico and Central America. The more I give back, the more I get.

Education is Not a Given 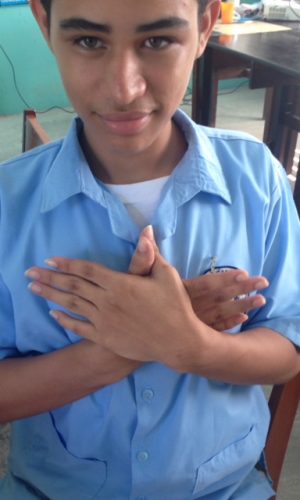 This year, I was in Belize for six weeks. I led yoga and meditation at a non-profit high school.

Before the school was built, the majority of kids on this small island could not study beyond grade school. For those who did, they had to buy uniforms, books, and supplies. Plus, they had to be able to afford transportation. No cars when they turned 16. In fact, there were no or paved roads on the island. These island kids had to take a 45-minute ferry to the mainland, then either walk, take a bus, or taxi to school. And in reverse, to go home each day.

I designed 90-minute workshops for the kids. While I expected nothing in return, being a part of the institution that made a difference in more than half the island’s youth was a big paycheck for me.

For two years in a row, I was on the coast of Nicaragua when the worst storms in history passed through.

I was one of about 100 people that took 4-wheel-drive vehicles down rivers and across streams. We headed to remote areas. Our charge was to clean the beaches and bring food, water, and even tin roofs to marginal areas. The townspeople hadn’t had running water or electricity for several days.

Our 30-kilometer trip, along with our clean-up time, was close to four hours in our caravan.  Some of us were on edge due to the tedious trudging through muddy roads, crammed 20 to a truck. Yet, we could learn from the locals.

In the absence of electricity, it was a street party. Kids and adults, locals and foreigners, played with the soccer balls we brought. Women ladled out food for those that didn’t have any. Young and old, there was no sense of despair. And yet, some of us despair if our internet connection is on the blink for a few minutes.

Karma yoga? It wasn’t really selfless. I nabbed a free ride to the beach. A free t-shirt, which I gave away. More importantly, I got an invaluable experience.

My karma yoga annual practices have ranged from three weeks to three months.  The rest of the year, I try to reintegrate into society, with ad hoc karma yoga for non-profits.

The man behind one community in Nicaragua, however, is a karma yogi. As one of my yoga mentors would say, he’s a conscientious entrepreneur.

For the most part, Nicaragua is unspoiled by multi-nationals’ monster-sized footprints.  Unsightly food chains are rare, and even the major hotel brands are nonexistent in most parts of this nation sandwiched between two oceans. It’s a country where travelers can find beauty in simplicity.

Visitors to Nicaragua are comfortable in simple accommodations. Upgrades are not oversized pillows, a super-duper showerhead, or an over-rated over-priced mattress. Rather, eco-friendly, organic vegetarian food, and proximity to a good surf, volcano, or jungle are the perks here.

For many, like me, we feel a connection to the people and the land.

Muffadal Saylawala was an investment banker. He said swapped his suits and briefcase for a backpack. After several years, something special rang out to him in San Juan del Sur, Nicaragua.  He bought a run-down finca. Then, a hostel. Now, six properties.

“The country is at a tipping point and we believe that we can help push which direction things move from the inside out,” says Muffa. “We are riding off a rising wave from the eco-conscious efforts of Costa Rica and targeting a widely underserved market. It is within our reach to transform Nicaragua into the premiere eco destination in the world, a place where the rest of the world comes to learn.”

Muffa is the opposite of a Leona Helmsley, Paris Hilton, or J.W. Marriott. It’s obvious that he’s committed to make the world a better place. His vision is to give back to Mother Nature, the economy, and the local community. He is building a supply chain going to and from the farm and his eco-friendly accommodations.

“We’re building bridges between worlds, peoples, and communities.” Muffa explains, “We generously share what we’re doing with the hopes that San Juan Del Sur becomes the most authentic eco-travel destination in the world.”

Strengthening the Chain of Tree Huggers

Hopefully, with every contact at one of Muffa’s properties, a touch of that respect for Mother Nature will grow exponentially. Rooms at Casa Oro are named: Regeneración, Transformación, Humanidad and Soñar.

First, “We know we’re not the only dreamers. We believe in collaboration. And, we seek to help people who wish they could live more holistically; the people who dream about leading a life full of meaning and fulfillment. We believe shared and united space fosters collaboration and creativity. Finally, we believe in building bridges between modern society and the new world — between business and nature — between travelers and locals.”

Part of the dream includes Muffa’s ever-morphing team of collaborators, like me. People from around the world are drawn to Nicaragua for a multitude of reasons. Likewise, they come with a wide range of skill sets, speaking many languages, all choosing to reinforce a circle of sustainability.

In my case, I taught donation-based yoga.  A full 100 percent of the donations were destined for La Flor, a government-run turtle reserve.

“We’re all weaving together, collaborating, sharing space and resources. We are building something greater than any of us could have ever imagined doing alone: an intricate and enormous web of elements around the world living regeneratively.”

“The more that we give, the more we have to give,” he says.  “Our work is guided by design inspired by nature. Her system is the most optimal that we know; self-maintaining, beautiful, and circular.”

Additionally, Muffa’s brand of conscientious entrepreneurialism uses business to preserve ecology. Furthermore, he uses business to empower communities, shape culture, and as a space to foster community. His measurable objectives are nothing like those that I saw in my 40 years in the marketing world.

Entirely self-less? Muffa is bound to get an immense feeling of contentment. And, he’s a big hugger. Hugging boosts endorphins. So he gets to feel good, too. There are always some perks with karma yoga, even if those aren’t the objectives. Just one more reason why karma yoga is my drug of choice.