Q. It’s not uncommon in the yoga world for people to have pet causes.  What makes Bhakti Without Borders different?

The charity is the sole purpose for making this album. It was crowd-funded upfront, so any profits that come in go straight to charity.

Many of the featured singers do not have professional music careers beyond this project. It comes down to the debate regarding whether sacred music should be commercialized. Personally, I believe the more people who can share this tradition the better. However, some of our artists firmly believe kirtan should always be free. So the only way we are able to hear their voices on this album is because no one is making a profit. The beginning and end of our efforts here is to do charity work.

I chose FFLV because so many of the modern Kirtan traditions hail from Vrindavan. That, and the fact that I am a longtime friend of the director, Rupa Raghunath. Having someone I trust handling the funds was crucial, if I was going to ask other people’s help.

Q. Why did you pick all female vocalists for duets?

Actually, that was the idea from the start. So many dear friends are on this album. Over the years I’ve wanted to record with them. Then, when we decided to make something that would give voice to these young girls of Vrindavan, there seemed no better way to do that than through the voices of these female kirtan artists from around the world.

Q. How did you and Dave Stringer unite to produce Bhakti Without Borders?

I met Dave last April when I was still in the middle of the fundraising campaign. I was looking for a local producer and Karnamrita introduced us. We met for lunch and immediately clicked. There was just a great vibe between us, we got each other. Dave had the experience and confidence to take a step back. He wanted to make my album sound the best that it could.

Q. What were your biggest challenges?

Locking down singers from far-flung locations with their various busy schedules.

We wanted to have either Dave Stringer or myself present for the various recording sessions so, for example, there were only two days when Dave was going to be available in Sydney. But for budgetary reasons, I needed our two singers to record on the same night. Carmella was in India when we contacted her, and Mallika lived up north near Byron Bay. So getting them all in the same sound studio on the same night was almost a miracle.

Another singer, Gaura Mani lives in Vrindavan, and because neither Dave nor myself were going to make it to India, we had to work on the song over Skype, and have her drive to a studio in Delhi to record her tracks.

Acyuta Gopi lives in New York and, because she has a young daughter, she could only fly out to LA for five hours to record before getting back on a plane. So it was this mad trip, her catching a 5:30 a.m. flight from New York, us scrambling to get what vocals we could within three hours, and then rushing her back to the airport. I felt terrible dropping her off — she hadn’t even found time to grab a bite — but she was all smiles when she left, happy and excited to undergo the austerity for our cause. How great is she?

Q. How long did it take for you to produce this album?

Just over six months, from the time I started working with Dave. A lot of time was spent between our sessions while he went on tour to Europe and Australia.

We recorded Gaurangi and Jahnavi in a tiny corner of my friend’s flat near London with a bunch of pillows bunched around the mics to create a make-shift sound booth. Dave flew in for a couple of days and stayed with Gaurangi and her family, and Jahnavi joined them on the second day to record her vocals.

The Sydney recordings were done at Monstereo Music, where Dave has a friend named Phil Rigger. For the Delhi recording, we somehow managed to track down the engineer who used to work with Cheb-e-Sabbah. All of this happened in the space of six months.

Q. Were there any surprises on the journey?

Many of the songs transformed as we went through the process. Some tracks took a hard left once we started recording – in the hands of our talented singers and musicians these songs came alive. These are sacred chants and they have their own identities that, if you’re willing to listen, can reveal themselves.

Q. Growing up in India, what was your favorite branch of yoga?

My favorite branch of yoga has to be bhakti yoga because it’s all about love – all soul and less body.

Kirtan is a completely inclusive way to share a deep spiritual experience. Music is universal, but kirtan takes it a step further by encouraging everyone to share their voice, regardless of ability. What other medium instantly reinforces both individuality and community?

I sing kirtan at least once a week and, when I can, I share it with my kids. It’s was a huge part of my culture growing up, and I want to pass it on. Sometimes my daughter will shut me down with a request for Katy Perry or Taylor Swift, but I keep working her, playing that kirtan music. Last week she said ‘Dad, is that kirtan again? I’m so bored of kirtan!’ which gives you a sense of how much kirtan plays in my house.

Q. Why should Bhakti be a part of a yogi’s practice?

Because it forces you out of your head. Some meditations require a lot of introspection and I think people can get hung up on all that navel-gazing to the point where they forget about other people. Bhakti means devotion and it demands you shine that light on someone else. I think that type of practice has the potential to make everyone, including non-practitioners, instantly happy.

Q. How can people contribute beyond the modest price of the album?

I encourage everyone to help however they can. You can sponsor a student. You can go to the school in Vrindavan and volunteer. You can help with international outreach and awareness. You can visit their website for donation opportunities or you can contribute through kirtan-shakti.com. All donations in the U.S. are tax-deductible.

Buy the album, convince friends to buy the album, share the project on social media. We don’t have a record label behind us, so the success of this effort is really going to come down to grassroots word of mouth. Attend our launch party.

Q. Who and what’s on the agenda for your launch party?

It’s top-secret, but there is a rumor we might play the entire album live! We’re going to have an explosion of talent with Dave Stringer, Sheela Bringi, Patrick Richey, Krishan, Tulsi Devi, and Nalina Kaufman blowing up the stage. Be prepared to dance. Tickets are $20 in advance $25 on the door but it is an intimate venue and I suspect we’ll sell out so I’m urging people to buy in advance.

Q.  How can people outside Southern California get involved in the launch?

This album is like a community co-op pooling resources for a project that has the potential to snowball, inspiring others to join the movement, and continue to effect meaningful and long-lasting change. 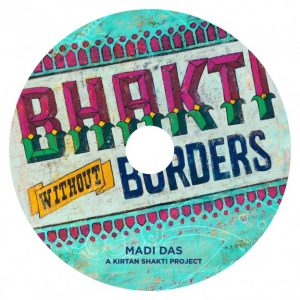 I really want Bhakti Without Borders to become a global phenomenon. What I would LOVE is for people to hold listener parties around the time the album comes out. I’ll start a Facebook group where people can sign up as album ambassadors to hold listening parties in their neighborhood – perhaps even on the same day as our official launch concert – I’ll get them a copy of the album, and they can invite friends over for a party and listen to the music before it comes out on May 12th.

The album will be released after Mothers Day weekend, however, the live concert is the day before. Let’s commit to trying to get as many people to celebrate Mothers Day by helping mothers in India.