At a BhaktiFest workshop in the high deserts of California this fall, he spoke about his childhood, his guru, Neem Karoli Baba, and life in general.

Back in the drugs, sex, and rock and roll days

KD was introduced to his guru through Ram Dass.  Ram Dass was a Harvard psychology professor and researcher who left the college campus to spread spirituality, and pen the eye-opener of the age, “Be Here Now.”

Krishna Das told an elbow-to-elbow packed room of bhaktas how his relationship with Ram Dass was a life changer. “In 1968, Ram Dass had just come back from India after meeting with Maharajji (Neem Karoli Baba),” recalled Krishna Das.  “In those days, there was like one book about this s–t.  When I walked into the room with Ram Dass, I knew it was real. Without a word, I knew that what I was looking for could be found.”

He spent the next year and a half with Ram Dass. Krishna Das absorbed the learnings and energy from the Maharaji through the former Harvard lecturer.  Long before he ventured to India to meet his guru in the flesh, the young KD was in tune with Neem Karoli Baba.

“I had felt him, and knew him already.”

He stayed in the land of his guru until he realized that he had to sing to save his life. He returned to the United States to spread devotion or bhakti. Today, Krishna Das is almost like a Kirtan guru. Many get hooked on Kirtan after hearing a Krishna Das CD.

For those that have been graced with hearing him sing live, on stage, or at a workshop, they understand he’s a Long Islander with a great sense of humor, that found his true calling in India.

“Sometimes I wake up in the morning, and I’m just f—ed up.  All I gotta do is sing, and I’m not f—ed up anymore. Chanting trains me, and I’ve been doing this for more than one week. I’m a slow learner,” he joked.

“I was not a happy camper,” he admitted about his childhood.  The yogic life, and Kirtan, in particular, turned things around for him. “I’m a moper. I miss it (moping).”

Krishna Das can relate well to most Westerners who may be lacking something in their lives. “Until you know who you are, there’s always some dissatisfaction. You can’t avoid stuff.  It takes a lot of courage to face the wound.” 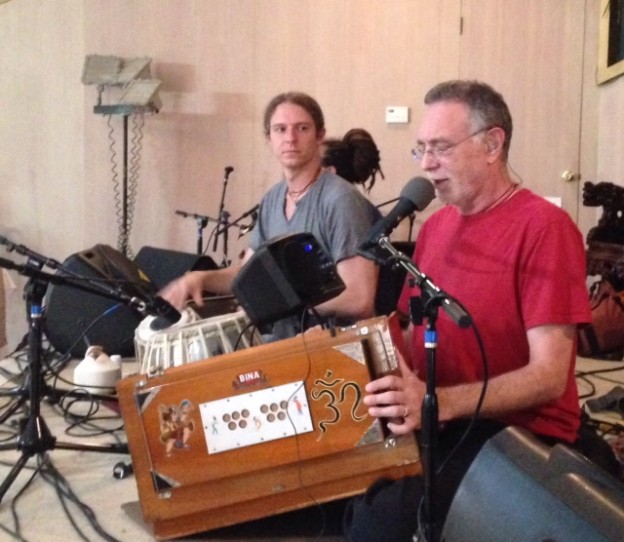 He referenced the Buddhist belief that life is about suffering. “I’m singing to find a way to live through it. Everywhere I go, everybody is exactly the same. The same BS to deal with.”

One of the problems Krishna Das referred to is the swollen ego. Or what the Beatles referred to in,  “I, Me, Mine”. “All day long, all we do is ‘me, me, me.’ We believe everything we think. We never question it. That’s the definition of insanity.”

He added that we, relatively wealthy Americans, are too caught up in things that are irrelevant.  “Most people in this world don’t know where their next meal is coming from. They don’t know if a bomb is going to go off.”

KD speaks from the heart to connect with the typical middle-class Westerner, from whence he came. At the same time, his messages are all rooted learnings from the ancient sacred texts and his guru’s light.

“Inside, underneath, all that we are looking for is unconditional love,” declared Krishna Das. In the words of Neem Karoli Baba, “Love is the strongest medicine. It is more powerful than electricity.”

Krishna Das will give a performance and a workshop on November 1 and 2 in New York City.  November 6-9 he and Sharon Salzberg will lead a retreat, “The Power of a Loving Heart.” From there, he tours the northeastern region of the U.S. before heading to Hawaii and the Bahamas.  For more information on KD, log on to www.krishnadas.com or read earlier posts on https://thenamastecounsel.com/yoga-blog/