I recently heard two master yogis, Sara Ivanhoe and Saul David Raye, recall how they got turned on to kirtan (devotional chanting music). They were teaching in the same yoga studio in Southern California. Raye heard a Krishna Das CD. He was so excited, he told Ivanhoe she had to listen, too.

The name of Krishna Das’ 14th album is Kirtan Wallah (vendor/singer) and he frequently says, “I’m just a kirtan wallah.”  Having been on the road for 20 years now, the 67-year-old is finally putting on the brakes. His largest fan base, before he begins his short-term retirement, will be at the seventh annual Bhakti Fest, the Woodstock for yogis.

KD, as many call him, has never missed a Bhakti Fest in Joshua Tree, Calif., or its sister event in Madison, Wisc. This year, organizers expect several thousand to attend the six-day festival that features nonstop sacred music and a panoply of yoga sessions in the high desert.  KD will lead kirtan Saturday, Sept. 11, and conduct a workshop on Sunday, Sept. 12.

Hong-be is from Singapore. She attended her first Bhakti Fest this year, in part, to hear Krishna Das. “He has a beautiful voice,” she says. “I think he’s been through a lot. He knows what suffering is, and is in a place where he can help a lot of people.” 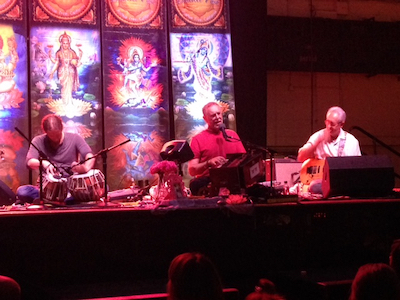 People love KD for his music — and his messages. At his workshops, after he chants and leads some call and response, they get to appreciate his candor and dry sense of humor, riddled with some not-so-sacred words for added punch.

“Chanting saved my miserable ass. The only thing is the definition of my ass expanded,” says Krishna Das who left Long Island in his early 20s to find enlightenment in India.

As a kirtan wallah, he also shares lessons learned from his beloved guru Neem Karoli Baba.

“My guru used to say repeating these names of God, everything is made full and complete.  It’s a ripening process. When the sun comes out, and you turn within, it ripens. It’s already there.  But it’s a question of uncovering it.  If you don’t plant seeds, nothing will grow. It’s a very simple thing, but we make it very complicated. The practice itself will change you from the inside out. It’s like a boy wearing glasses with a wrong prescription. That’s all you know, so you don’t question it. It’s all so simple. But the key is doing it. The most important moment is the moment you get your ass down to practice.”

KD acknowledges the tilling of the soil transformed him, for the better. “If I didn’t sing with people, I wouldn’t clean out my shadows. I had to force myself to get out there and start singing.  Everything you need is within. Our own self. Not somebody else’s self. These names/mantras have the power to move us deeply. And as that happens, the way we see the world shifts.”

The kirtan wallah understands it’s not always easy for Westerners to get in the habit of chanting or meditating.

“We wake up in the morning and start writing, producing, and directing the movie about me. And then, we write reviews, and we get even more depressed. You can’t kill a thought. But you can let go of it. That’s why it’s important to do something (like chanting or meditation) regularly. Even five minutes a day. I’m a member of mopers anonymous,” he jokes. “A charter member. But, now I mope around less.”

With his light-hearted spirit, you wouldn’t know that he’s a moper. Nor, would you know that he needs a break from his daily touring schedule that takes him all over the world. Last year, he was on stage leading close to 100 performances and workshops. Add in the travel time, mostly by land, and he’s touring 300 days a year.

“Everywhere I go, everybody is exactly the same. Even when I’m in Moscow. Actually better there. And one thing I find, everywhere I go, is that the intensity and level of bull shit is incredible.”

After spending his formative yoga and kirtan years in India, he clearly has a soft spot for the people and culture of the land of his guru.

“I would go to India and just disappear in the mountains. When you’re home alone (in the U.S.) the television is there. But not in India.”

This past January, there were 2,000 people to hear him on stage in Mumbai. In Delhi, the concert-goers were of all ages, and clapped enthusiastically and danced in the aisles.  In Bangalore, he got a standing ovation, and requests to return. He closed out his concert with these words, “As we say in America, Namaste,” prompting many laughs from the audience.

“There’s a million kirtan wallahs (in India), but they knew every song I sing, and every joke of mine,” which KD attributes to YouTube. “In New York, people won’t come from the east side to the west side. But in India, they came from all over.”

He didn’t always pull in the thousands of fans. In 1994, there were only six people at the yoga studio in New York City for his first kirtan. “They had to be there,” KD says. “They were part of the teacher training.”

Nina Rao led the response vocals on his India tour. She has shared the musical stage and traveled with KD for 19 years. A recording artist in her own right, she also leads Hanuman Chalisa workshops most mornings at Bhakti Fest. She recognizes the importance of the festival for people that travel from all over to not only see KD, but partake in the yoga and kirtan all-nighters.

Rao shares, “I asked one of the attendees why they come to Bhakti Fest and he said, ‘We don’t have regular chanting in our hometown, nor do we go to India, so for us, this is our pilgrimage.’ That really struck a chord with me. The festival brings together some wonderful teachers and leaders, and it’s a great opportunity for the attendees to have new teachings and experiences.” 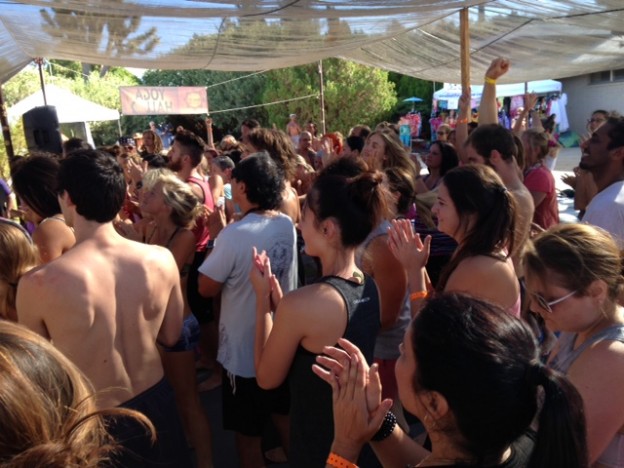 Both Rao and Krishna Das try to give the attendees the experience they are seeking. At his workshops, Krishna Das always opens up the floor for questions from the audience.

Even during his R&R hiatus, his Kirtan Wallah Foundation, will offer audio and video recordings and harmonium tutorials “for people to connect with him remotely while he stays home,” explains Rao.

“I’m doing the best I can with what I’ve been given,” confesses KD. “And I’m hoping that’s going to be enough for me and everyone that comes in contact with me. I want to be love. That’s all I care about in a nutshell.”

Bhakti Fest was created as a place to “go deeper inside yourself and find out what your truest spirit is,” through yoga, chanting, and breathwork workshops.  The festival celebrates the devotional path that has its roots in yoga, kirtan, and meditation. The festival donates monies to a variety of non-profit organizations which provide food, education, and environmental beautification programs around the world. For more information on Bhakti Fest, visit www.BhaktiFest.org or read prior blog posts of mine.