Yoga is not just about 60 minutes on a mat. For me, anyway. It’s a lifestyle that follows ancient tenets. Among them, loving-kindness. Act selflessly and be in harmony with the universe. In his book, “Krishnamacharya: His Life and Teachings,” A.C. Mohan says, “if the yamas and the niyamas are practiced, one will have universal compassion toward all living beings.”

I consider loving-kindness to include opening our doors and hearts to immigrants. All my grandparents fled persecution. What’s more, I recognize that with the exception of the Native Americans, all Americans were once immigrants.

Melanie Nezer is senior vice president of public affairs at HIAS, a non-profit dedicated to selfless service and advocacy for immigrants. Last week, HIAS hosted a Jews for Refugees Assembly in Austin. Established in 1881, HIAS is active in 16 countries from Kenya to the Ukraine. And, the U.S.

“We used to help refugees because THEY were Jewish. Now, we help refugees because WE are Jewish,” she said. The reason for HIAS underlies the meaning of the Hebrew word tzedakah. Charity. Social justice. Righteousness. In other words, tzedakah, like the yamas and the niyamas, promotes loving-kindness and compassion.

Loving Kindness: Love the Stranger as You Love Yourself

As a child, I memorized the words on the Statue of Liberty. “Give me your tired, your poor, your huddled masses yearning to breathe free.” Basically, a compassionate mantra for those seeking a better life.

Today, that welcome mat is out of sight, said Rabbi Alan Freedman of Temple Beth Shalom at the Austin assembly. On the contrary, the current administration demonstrates a lack of compassion for immigrants. To clarify, Rabbi Freedman spoke about a disregarded passage in Leviticus.

Leviticus 19:34 states that one shall love the stranger as one loves oneself. Recalling being foreigners living in the land of Egypt.

Rather than honoring what many religions prescribe, our government is harming the foreigner, said the Rabbi. Especially the millions whose lives are at stake in their homelands.

“This story of fear to freedom is under threat. The policies of our government are violative of this commandment. It’s a policy of cruelty. A stain upon the national soul.”

Ahmed Abbas crossed the Atlantic hoping to close a chapter of fear and live in freedom. Taking a turn on the teachings in Leviticus, he was not a foreigner in Egypt. Conversely, he fled Egypt and became a foreigner in North America.

We Need Each Other

Abbas was a political exile, having been a leader in the Arab Spring protests. Just a decade ago, tens of thousands rallied for peace, freedom, and a change in the 30-year rule of Egypt’s President Hosni Mubarek. Abbas escaped to Mexico. There, he began a successful business. However, that attracted the cartel. And threats. Once again, feeling danger, he became a two-time refugee. He sought asylum in the U.S. in 2014. Today, his residency remains in limbo.

In perfect English, he spoke about an element that tzedakah and the yamas and niyamas share.

“Compassion is the only aspect of mankind that makes us human.” All throughout history, there have been ideological walls. Yet, every human invention is based on connecting with one another, to some extent. “We all have imperfections. We need each other.”

Yet, compassion is not always part of government policies acknowledged by Texas House Rep. Gina Hinojosa. Rather than compassion, she said current policies reflect cruelty. While no longer discussed on the nightly news, child separation continues. A point often overlooked, many children enter the U.S. with a family member. If it’s not the mother or the father, they are separated. Regardless of the fact that the parents entrusted their child with the relative. Secondly, millions of Americans live in mixed-status families. One child may be a U.S. citizen or legal resident. Another is not. To repeat, families are separated.
HIAS Austin Jews for Refugees Assembly 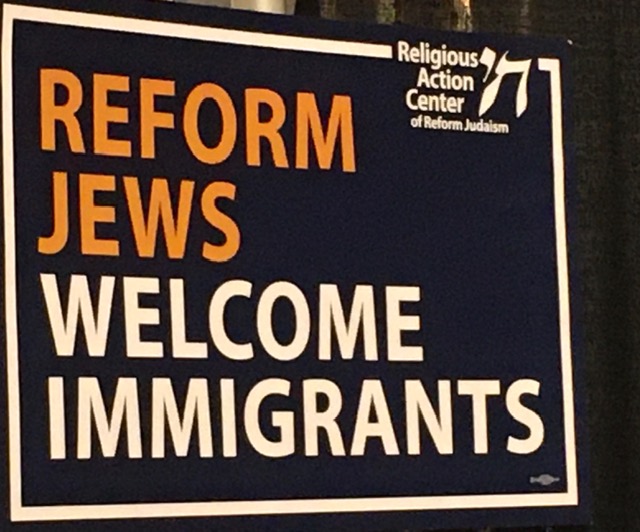 Another example of cruelty is the number of refugees allowed in our country.

HIAS’ Nezer said there are 71 million displaced people, globally. Of those, 26 million are refugees. The number the U.S. government will allow to be resettled? Less than 18,000. In Texas? Zero. Therefore, the doors are basically closed for asylum seekers.

“What our country has done is offshore asylum responsibilities.” The result: “the most horrible…de facto refugee camps” void of any security and basic necessities. Rather than offering a safe-house for those seeking asylum, 80 percent become victims of violent crime under the U.S. “Migration Protection Protocols” a.k.a. remain in Mexico.

“We are killing people. Very literally. We started a feeding frenzy for the cartel,” said Nezer. People are getting death threats on their cell phones.

Nezer, whose organization provides legal counsel to refugees and asylum seekers, gave an example of one man from Cuba. He asked for asylum at the U.S./Mexico border. His case was waitlisted for three to four months. In just five days, he was held up at gunpoint five times.

HIAS is spearheading more opportunities in Austin and throughout the U.S. The goal is to show compassion and make a difference. Following, are a few easy steps.

Finally, remember that advocacy is essential. Above all, understand small efforts count. “You can make a difference in someone’s life,” Nezer urged.