Learning about spirituality from monks in Vrindavan 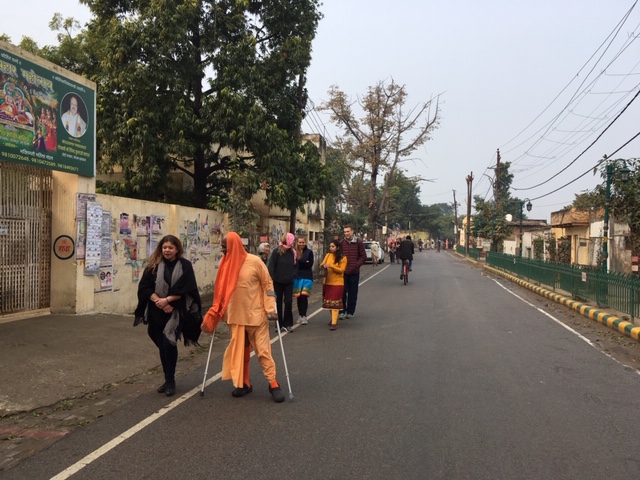 If you read my last three articles, you know that I recently spent one month nurturing my spirituality in India. More than one week was spent traveling with monks. I don’t mean seeing men in orange in trains, temples, or fire ceremonies. Rather, briskly passing through airport security because I’m with the men in orange. Or, riding together in a 42-seat chartered bus at all hours of the day and night. Most importantly, visiting beautiful sites steeped in history and spirituality. And, listening to their learnings on topics such as love, religion and karma. So now, it’s time for reflection on man versus ape.

Man vs. Animal: Spirituality is based on discussions with Chaitanya Charan and Shyamananda Das at Govardhan Eco Village and in and around Vrindavan. Both men left the material world to become ISKCON monks more than 30 years ago. Their home base is in Mumbai.

The difference between human lives and other lives

There are four basic things that all beings do.

1) Eat. 2) Sleep. 3) Mate. 4) Defend. Many believe the difference between man and animals is a rational mind. However, the monks disagree.

“Animals sometimes behave in a much more rational way than humans.”

Why do humans overeat, or drink, to the point of short-term or chronic sickness? Cats won’t eat when they’re sick. Humans do.

For a long time, tobacco companies were pushing their products, hiding evidence that cigarettes kill.

Now, with danger warnings plastered all over the boxes and cartons, humans still choose to smoke. And, smoking is a more benevolent form of addiction than some. The types of addictions evolve with time*. And cultures. Consider meth-amphetamine, glue, or behavior addictions like gambling or sex. Aren’t these all forms of irrational self-harm?

“We not only have developed a thinking faculty, but an emotional faculty, that may work against us.”

Rationale is making the best decision for all, including yourself.

Man is destroying the planet, for material desires. That is not rational.

In many tribes of the Amazon, people had an understanding. “Every tree is for our benefit. Now, suddenly they’re giving contracts to lumber companies.” Culturally, things keep on changing, and rationale is material rather than making the best decision for all.

In Chaitanya Charan’s book, “Science and Spirituality,” he ponders, “how does an intelligent human being embark on such a destructive course?”

Our society is going downhill in the guise of modernization and advancement. Technology may make life easier in so many ways, but on a macro level, it’s destroying our civilization.

“Instead of simple living and high thinking, people are simply living and hardly thinking.”

In “Science and Spirituality,” Chaitanya Charan talks about the wisdom of the traditional Vedic culture and society.

“Vedic culture was based on the implicit understanding that human happiness came not by external aggrandizement meant to satisfy one’s lust, anger, and greed, but by the inner realization that gradually freed one from these internal enemies. Life in Vedic times was not a rat race for wealth.” Rather it was based on spirituality…” the social environment provided abundant facilities and encouragement for one to develop oneself spiritually and find happiness within.”

Spirituality: the Difference Between Man and Monkey

“One of the hallmarks of spirituality is more cooperation and less competition.” But, there’s no scope for being lazy here. A spiritually adept person asks for strength to do what’s needed.

“The sun can be giving its rays, but we are living in a cave. All we need to do is stop hiding in the cave. Once you’re out, you don’t need a candle or flashlight to see where the sun is.”

Basically, that’s the essence of self-realization. Take off the blinders.

Use spirituality to see oneself.

To improve these things, only, doesn’t give you spiritual life. “Miracles do happen, provided we have the eyes to see.”

That search, whether it be for drugs or self-realization is all about trying to feel better.

Thus, the monks suggest that the greatest books are about a protagonist seeking something.

In Radhanath Swami’s autobiography, “The Journey Home,” he talks about that search. His story could be called “Indiana Jones and the Journey of Radhanath Swami.” It chronicles what happens when a typical American kid hitchhikes across the world, penniless, searching for wisdom. Destination: India. Along the way, he met many a self-proclaimed “guru.” Farses.

“When you meet a real spiritual teacher, it’s like seeing through high res glasses.” That came about for Radhanath Swami when he met Srila Prabhupad, the founder of ISKCON.

Finally, Chaitanya, for his part, was on that same path. Searching for spirituality. He reflects on that search in his book “Science and Spirituality.” “The struggle to reconcile the lofty ideals that I cherished with the lousy reality that I observed around me prompted me to turn to spirituality for answers…my scientific instincts made me look at spirituality with a healthy dose of skepticism.” Like Radhanath Swami, he found answers in the teachings of Srila Prabhupad. “I knew at that moment that my life would never be the same again: the scientist within me had discovered the spiritual dimension.”

*According to the Institute of Health Metrics and Evaluation (IHME) and World Health Organization (WHO), it’s estimated that globally, around 164 million people had an alcohol or drug use disorder in 2016. And, in 2017, the US Department of Health and Human Services declared the opioid crisis a public emergency.