Unwilling to surrender to the plague of emotional depression and physical defeat he often observed in many NFL peers facing similar traumas, he channeled his energy into the practice of yoga and meditation for healing.

Keith was living his lifelong dream, playing in the pros. He was with the Jacksonville Jaguars when a tackle he’d done a hundred times, landed him in the hospital. It ended the life he knew.  The ritzy…the glitzy. That tackle squashed his cervical spine and his career. It crushed his identity and his ego. “Everything I thought I was, had to be questioned,” he says.

At one of four meditation sessions Keith led at Wanderlust Festival in downtown Austin, he told the rows of students lined up on the mats to take a look at themselves. Not in the mirror to check their alignment, but deep inside to scan their soul.

Self-Discovery Part of the Road to Recovery

After his spinal contusion, Keith pulled away his own veil, and slowly, found his true north. He removed his #59 jersey and donned loose-fitting Aladdin yoga pants and mala beads.  His road to self-discovery led him to become a Master Certified Yoga Instructor.

I developed a new identity of authenticity which helped me find acceptance of the “treasure” within myself which had been hiding behind the sports label I had carried my whole life.

This is really what yoga is all about. It doesn’t matter if you can do a handstand or pincha mayurasana. What’s important is that you listen to your inner self. Keith calls that “weightlifting of the mind.”

“We’ve been conditioned to internalize things. Yoga teaches you to connect with your body and be aware of it, unlike any other way. In my own journey, that was challenging. I was lying to myself.” 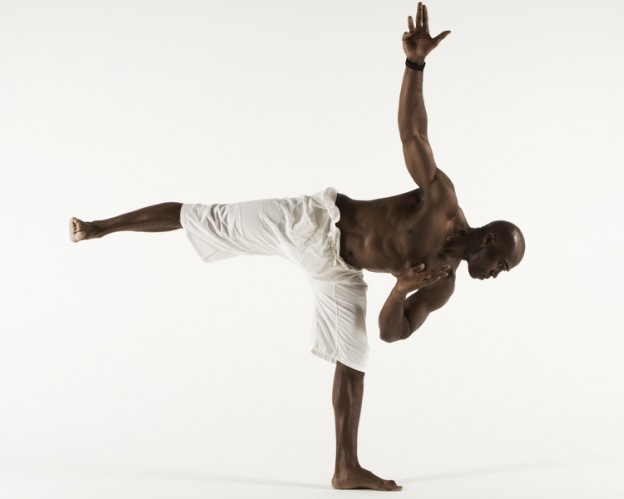 Keith’s original master plan was roadblocked by the serious spinal injury that kept him immobile for six months. Unable to walk, a therapist in the hospital suggested meditation as an approach to his healing. Today, his body and mind reflect Superman’s internal and external vision and strength.

“The practice of yoga and meditation teaches individuals that the mind and body are not machines. We can live this mundane life, but internal satisfaction is missing. We can live that life or create something new.”

Far from the life of a sadhu, Keith had a garage full of fancy cars, but couldn’t drive them. He had to question everything from his relationships to his connections to his career. Through meditation and yoga, in that order, Keith found his dharma.

“What I’ve understood about roadblocks, is that we have our development of how we look at life. Our perceptions. Like the elephant in the room, versus the spaces.”

Maya gets in the way. Keith’s tragic accident was a spotlight that started to shine through the veil of illusions.

“A lot of athletes are the most insecure individuals,” he confides. “I had the opportunity to transform that energy into my development as a being. Now I have the power and strength from realizing I can transform the energy that I tapped into, in a sense of something that works in a whole different way.”

It’s easier to stay in your rut. Fear of the unknown is an invisible wall. 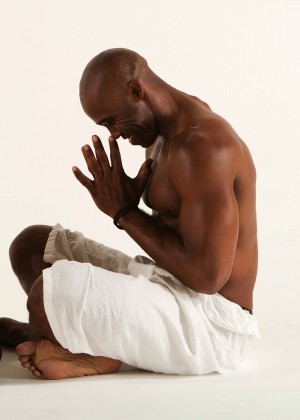 “Fear is inevitable,” says Keith. “It’s constant. To have an idea that it will go away is an illusion. We need to use it to catapult ourselves to do things and do some amazing things. The treasure is at the end of the tunnel. When we let all the facades go, and focus on the possibilities, we can have it. You put love in the world, and love comes back.”

As he explains in sports analogies, “In college football, we think linear. From college to the pros, we go from here (he forms a box with his hands) to the peripherals.”

The NFL yogi chose to go outside the lines and spread the benefits of yoga and meditation. He has created a holistic wellness facility, with Congressman Tim Ryan of Ohio. The center will include the modalities he uses in his own healing. “We’re putting the pieces of the puzzle together so they can be accessible to other people. Imagine that next place, in all aspects of our lives. If not now, when?”

Yoga therapy is a holistic and personalized approach to improving one’s mental and physical health. Keith found that, and now, shares his treasures with others. He’s playing it forward.

The NFL yogi teaches private classes and has several pet projects to bring yoga to athletes, youth, and vets, including his charity of choice, the #LightItUpFoundation.