Plant-Based Eating: Then and Now

When Pizza Was King

By the time I got to college, I was already a committed vegetarian. However, I knew nothing about nutritious plant-based eating, nor how to forage for wholesome meatless options on campus.

In my entire dorm, there was just a handful of us vegetarian or kosher dairy folks. Fortunately, my dorm had peanut butter, Grapenuts, and salads. Then, there was Garcia’s. They delivered whole wheat-crusted pizza, even at odd hours. Frances Moore Lappe, one of the leading pro-vegetarian authors of the day, said cheese and wheat were good combinations. Done deal.

That was basically it. Choices were bare. But, I stuck it out.

That was the 80s. When I moved to San Antonio in 1998, there wasn’t a single vegetarian restaurant in town. Now, we have terrific vegetarian, vegan, and veg gluten-free dining spots. A sign of the times. People want healthy — and tasty — food options. Plus, consumers recognize it’s not only better for your body, but for the planet.

My alma mater was Champaign/Urbana, Illinois, three hours south of Chicago. Recently, I was invited to an eating spree in another Big Ten town.  Plant-based students the universities and community colleges in that area have it pretty good. Same for their parents, teachers, or anyone in the area that just wants a good meatless meal.

There are 300 food businesses in a fairly small geographic area near the University of Michigan. Plenty have options for the plant-based or plant-preferred community.  In fact, Huffington Post placed this college town in the country’s top ten vegetarian cities. And, Animal Equality voted Ann Arbor among the Top 10 Vegan-Friendly Small Cities. 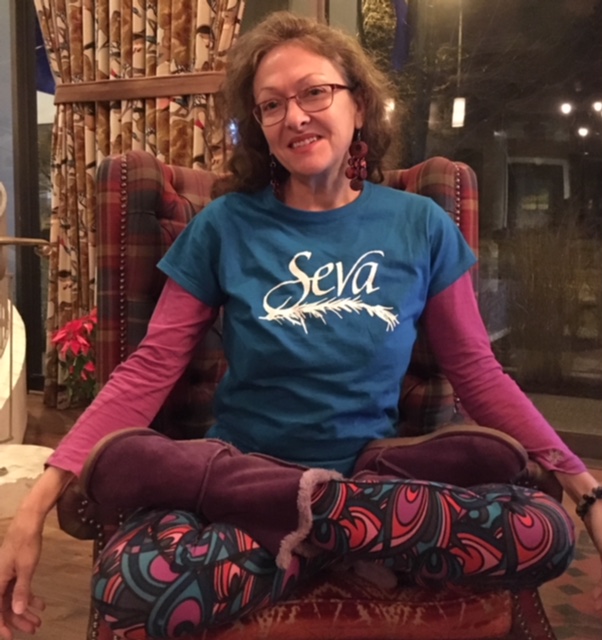 Seva was the lone bird back in the day that I was a student at UI. The all-veg diner opened more than 40 years ago. They cater to everyone, not just the PETA plant-based peeps.

My cousin, David, Goldberg has lived in the Ann Arbor area for what seems like forever. He knows Seva well.  He says the food is far from dull. “Seva stands out because they amaze with great flavors and textures, and presentation.  While I’m not vegetarian or vegan, I feel no sense of loss there.”

Consider starting off with a parsnip chowder which was featured in Vegetarian Times. Taste the tempura-battered cauliflower or gluten-free bruschetta topped with a vegan basil cashew pesto. For entrees, how can you beat pumpkin manicotti? Some diners say Seva’s Pad Thai is among the best, with our without the eggs. Top off your meal by choosing from vegan gluten-free ice cream in three flavors: volcano salt vanilla, coffee, and maple bourbon.

Earthen Jar is another favorite of David’s. When he picks up a carry-out order, he can’t resist noshing on the way home. Earthen Jar is all vegetarian (and kosher) Indian food with banana pudding that David says is a real winner. While Earthen Jar was the first kosher place in town, Vedge Cafe is a new kosher vegetarian small shop. Owned by a vegetarian registered dietitian, she makes seitan salami, turkey, and corned beef plant-based alternatives. Sandwiches include a vegan Reuben, caramelized onion with cremini mushroom, and tomato-mayo. Plus, Vedge offers a vegan gluten-free soup that changes every day and several hearty salad options.

They offer comfort foods like cinnamon buns, pepperoni pizza, and chili cheese tater tots. In addition to trying to build a better planet through plant-based foods, they are avid supporters of the Youth Justice Program.  Beyond monetary contributions the vegan restauranteurs make, many of their employees have been assisted by the non-profit which seeks to ensure human dignity and full participation in the community of people who had been incarcerated as a youth. And, this is one of the few dining establishments where employees get health care benefits, including paid time off if they’re sick. Most other restaurants subtly encourage sick staff to come to work so they don’t lose out on a day’s pay. Of course, that just doesn’t make sense in the food industry.

The owners see the shift to plant-based eating moving quickly. Joel Panozzo says, “We’re at least broadening consciousness of what vegan food is. Nowhere on our menu does it say vegan. We’re just trying to provide the option so people can make more meal choices. I think more restaurants we will cater even more to these communities as they become larger.”

All studies confirm Americans go overboard with meat on their plates.

On average, the consumption of protein in the U.S. is double that of people in other countries. This is why I’ve always preferred Middle Eastern or Asian cuisines.

But, what I find especially encouraging is mainstream establishments that understand people don’t always want to have a cow.

Travis Schuster is the head chef at Ollie in Ypsilanti.

“I use animal products less as main events, and more like seasoning in my personal diet,” he said, which is how meats tend to be used in other countries.

Schuster acknowledges the trend in healthy living. About a quarter of his guests are vegetarian or vegan, and everyone can appreciate good plant-based food that’s served upright.

“…Many of our patrons are health conscious. Omnivores do frequently order vegetarian and vegan dishes.”

Ollie does a stellar job at serving tasty and healthy vegan and gluten-free dishes. A large number of the brunch dishes are vegetarian or can be veganized. The dinner menu includes a tartine made with roasted sweet potato spread, charred broccoli and cauliflower tossed in tahini vinaigrette with fried shallots and toasted squash seeds which was out of this world. Schuster whips up a sweet potato burger with pickled beets, caramelized onion vegan aioli, cashew spread, and farm greens.

“My main goal with Ollie is to make locally and sustainably sourced food accessible to the entire community. Overall, I think that people respond positively to our sourcing practices because they want to feel that they are making a responsible decision when they chose to dine at Ollie over a less environmentally/community-conscious establishment. We are taking their dollars and putting them right back into our community: whether it’s our staff who all live within walking distance of the restaurant, the farmers in our community, or the producers and artisans that are helping to shape and fortify sustainable Michigan foodways.”

Likewise, one of the newest eateries is big on healthy dishes, that just happen to be meat-less.

Fred’s opened this year, near the UM campus. This eatery is influenced by the small health food cafes in California. In the trendier West, and at Fred’s, veggie, vegan and gluten-free options are plentiful. Furthermore, everything is organic. Colorful smoothies. Green matcha cappuccino. And superfoods. Plant-based power protein bowls are made with delicacies like acai, almond butter, berries, seeds, and cacao.

To sum up, Ollie’s head chef notes the rise in vegan dining options. “There is hope. People vote with their dollar.”