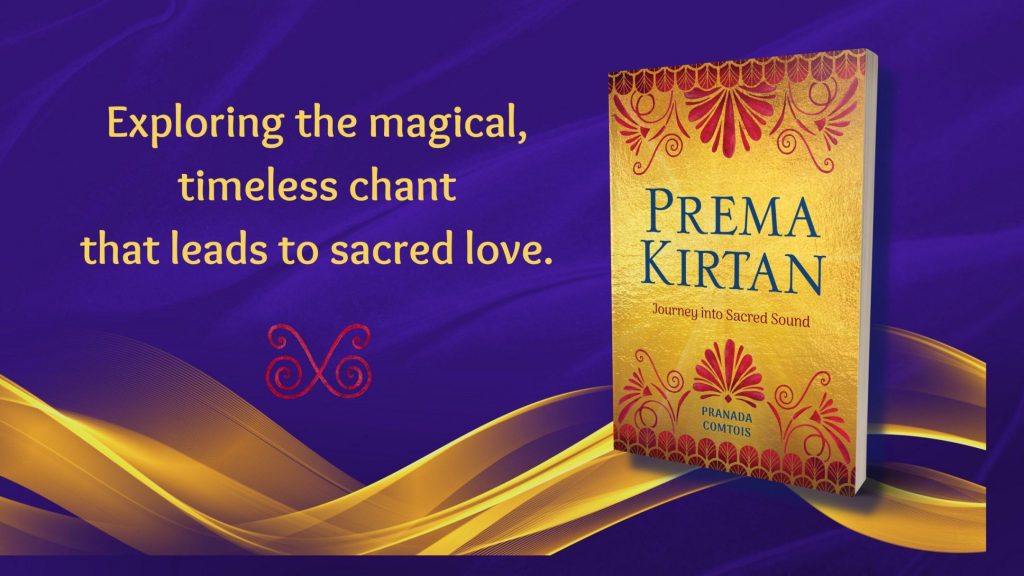 Pranada Comtois is the author of three books. Her first two, “Wise-Love” and “Bhakti Shakti,” won multiple awards. Pranada guest-authored an article for my site when “Wise-Love” was released. Her third title, “Prema Kirtan," takes a deep dive into the hows and whys of kirtan. And in particular, the super-powered benefits of the “prema” part of kirtan.

For newbies, I’ve written scores of articles** on sound therapy and kirtan. I define kirtan as devotional chanting in any language. Kirtan can be any rhythm, any instrumentation, or just your voice. While kirtan can be done solo, group practice magnifies the experience.

A hallmark of group kirtan is its call-and-response nature. When you close your eyes and focus on the leader’s sounds, it's easier for your expression to come from the heart. Let go of extraneous thoughts. Let go of judgment. Just connect to the mantra.

The Sanskrit word means divine love or affection. One of the hallmarks of prema kirtan is the repetition of the holy name — with love and affection. It’s not uncommon to repeat a few syllables for an hour or more. Non-stop. I don’t get bored or lose focus with prema kirtan. In reality, I consider the practice therapeutic for my ADHD tendencies.

According to Pranada, this mantra meditation practice helps us shed attachments to the material. It “lifts us out of the mundane and takes us to the very nature of our existence. The mantra is not just representational but the Supreme is present in the name.” Or maybe we draw the Supreme closer to us with our vocalization.

As a correlation, Pranada talks about mother-to-child expression. “How do we communicate love? We speak the person’s name. It’s so spontaneous and natural. The same with [expressing that love for] the Divine. Mantra is so easy and it’s such a beautiful practice. And it’s taking us to the highest spiritual attainment. We’re just calling out and petitioning with love.”

Unfortunately, in our western world, people often think yoga is about pushing themselves to the extreme. As a yoga therapist, it grates on my nerves when I see images of modern “yogis” doing difficult, often unsafe, poses. None of that is natural whereas prema kirtan is like turning on your autopilot.

Modern yoga has spawned a showing off the external. However, true yoga is about the internal. The original yogis sat, motionless. It was a practice that led to heightened introspection and bliss. My sure-fire route to bliss is through kirtan.

“That inner journey is an important part of kirtan,” says Pranada. “Those in the kirtan culture live two lives. Secular and internal. A lot is going on internally. We’re locating the self. We’re trying to dismantle the ego. It’s profound. A whole journey unto itself.”

Pranada adds, “There is a transcendental wave in the world. And it’s coming through kirtan. People think of kirtan as music. But it’s much more. [It’s} a private personal practice. Speaking sacred text. We can engage in different kinds of kirtan. We certainly don’t have to be a musician.”

The Science of Prema Kirtan

I prefer fact-based versus fiction books. Pranada doesn’t just share folklore. She delves into kirtan’s origins and how mantra heals us and frees us from self-imposed limitations.

“I had some real a-ha moments researching that. Now I understand why the Absolute chooses this medium to communicate with us,” she says. The soothing sounds of mantras are not unlike the fetus hearing a mother’s heartbeat. Put simply, hearing is the first and last of the senses we use in life.

Our sense of sound “rules the universe of tone or emotion. Hearing can bring on deeper feeling states than those aroused by the eye, nose, tongue, or touch because the sense of hearing connects experientially with the heart.

“I came across astounding research. Just sound itself has the capacity to transmit knowledge, information, and emotion and feeling. What underlies music is math. Every tone is a number and has an emotional quality, and the ear can hear both.”

In the case of prema kirtan, it’s more than sound. “It’s the effect of the mantra.”

Sanskrit mantras have greater results. Sanskrit, Hebrew, Arabic, and Latin are all said to be sacred languages. So it’s no wonder that these languages are frequently chanted by people who don’t understand the words.

Pranada immersed herself in the history of kirtan. She found it dates back to the high priests during the cradle of civilization. Then, during the sixth century in Southern India, there were two groups that were part of the original bhakti (devotion) movement. The Alwars, Tamil poet-saints, were devoted to Lord Vishnu. Whereas, the Nayanars were 63 Shiva-worshipping saints.

“The Alwars and Nayanars initiated the bhakti revival movement that challenged caste hierarchy, empty ritual, blind faith, and the notion that severe asceticism and renunciation (a mostly male enterprise) was the only way of attaining spiritual perfection…they gave voice to the disenfranchised and permission to all people to express their heart in their own language. Their messages sought universal brotherhood and religious tolerance and inclusion.”

The movement was galvanized in the 15th century, thanks to Chaitanya Mahaprabhu (great man). Believed to be Krishna incarnate, he made a dramatic, yet simple, the difference to the practice. He took one mantra to the masses. All castes. Harinams (roving public kirtan) touched not only the chanters but the onlookers too.

Chaitanya Mahaprabhu predicted that prema kirtan would spread all over the world. It did. One man, closely connected to Lord Chaitanya followed his lead. He took the practice to people from all walks of life.

Following the direct chain of disciplic succession (parampara) a few hundred years after Lord Chaitanya, at age 69, Srila Prabhupada, penniless, boarded a cargo boat bound for the U.S. Despite 101 challenges, the “kirtan aficionado extraordinaire” was instrumental in spreading prema kirtan.

“The main avenue that [kirtan] came into the West is through Chaitanya Mahaprabhu’s kirtan. 1966 was the first prema kirtan heard in the United States…under a tree in Tomkins Square in New York City.

Pranada began riding that wave nearly 50 years ago. Through her books, she tries to share the source of the sacred practice.

“While I was writing the book, I realized human potential. I wrote ‘You can become a spiritual luminary. The world needs that version of you desperately. If you focus on the spiritual practice of maha meditation you can choose where you’ll be…for eternity.  We can go anywhere we want.’”

** Click on Kirtan & Bhakti under “categories” within The Namaste Counsel archives.