Speaking and Breathing in Sanskrit

The sound “Om” may be a symbol of yoga. However, I was taught that Om is more of an appetizer, not to be eaten alone. It’s the first seed sound from which many a mantra can follow. In my personal practice, and in my group classes, I rarely ring in, or out, the session with stray chanting of three Oms.

However, I incorporate Sanskrit words in my instructions, and of my 700 playlist songs, Sanskrit is infused everywhere.

My yoga teacher training required us to memorize Sanskrit terms for a long laundry list of asanas. We also had to identify and name just as many anatomical parts. Possibly because of my knowledge of other languages, Sanskrit was a cinch for me.  The anatomy required hours and hours of memorization and notecards, and it never completely sunk in. Today, I have a hanging six-foot man on my wall with the names of his musculoskeletal parts listed on a four-foot-long piece of cardboard.

So, I guess I find Sanskrit more attractive than body parts. 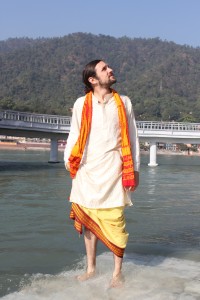 Tyagaraja Welch studied classical Sanskrit for a decade.  He was initiated by a Himalayan Monk and Sanskrit scholar in the ancient Kriya Mantra Saadhana, and is a dedicated student of Sanskritic heritage. At the Texas Yoga Conference in Houston, this Austin-based yogi furnished some primers on the ancient sacred phonetic language.

Here are a few of his comments, starting with the basic word Hatha, as in Hatha yoga.

Test #1. Everyone knows that word. Ha’-Tha. Wrong. According to Tyagaraja, the second H is aspirated. There is no “th” sound as in the English “this” or “that.  It should be Ha’-T(h)a, “with the tongue curled to the roof of the mouth and the H sound coming out only as breath.”

Pass or fail? Does it really matter how we pronounce these words, some may ask? Definitely, according to Tyagaraja, since the Sanskrit alphabet is a construct of creation. “It’s a living vibration,” he says. “Unlike other languages, it has not changed, for the most part. Not only do the sounds connect to nature, one could say they are the energetic representation of nature and the cosmos itself.”

Test #3. We all may think we know how to say Om. How hard can it be? Two letters, right?

I was taught to chant those two letters as three sounds: Ahhh, Ohhh, and Mmmm. Tyagaraja makes it five. The nasalization of the M and the leftover vibration. He explains that when we say Om, it should also be a pranayama exercise, using ujjayi breath.

“Singing the sound Om is…pulling prana into heart,” he says beautifully.  “When those things are controlled, you are in your own true nature (nada); we bring prana into the heart and letting go of Om, nasal M (bindhu) is what gives more nada (sound vibration leftover).”

Tyagaraja teaches that when we repeat the seed sound Om, the breathing should be done with a slight curl of the tongue to the soft palate which closes the glottis thereby internalizing the breath. That tongue placement is the same as Tai Chi movement meditation suggests.  While we are silent in Tai Chi, yoga allows you to be more vocal with your breath, or voice.

Sometimes, I encourage my students to chant along with the music. Often, I invite them to listen to their breath, especially while in down dog. Chanting Om in a down dog is also beautiful, as you can really feel and hear the resonance and reverberation.

Tyagaraja encourages a natural hissing sound. His example is to pretend that you are fogging up a mirror. That can hone in on the inner sound, and connect with the heartbeat.  “Ujjayi is what’s moving the body. The flow of even Ujjayi breath is what sets the speed of movement in Yoga Vinyasa.”

So the chanting or vocalizing of mantras becomes a form of pranayama. This takes us to Test #4. Is the correct name for breathwork pranayama or pranayam? Tyagaraja explains that this is one example of minor adaptations in the Sanskrit language. In Hindi, the letter A is dropped off at the end, and in southern India, an AM can be added. This is why some say prasad, and others prasadam.

As far as that breathing meditation, where do you focus your attention? Test #5.

I love breath work and meditation and will frequently have my students focus on many different chakras. Typically, though, I encourage people to focus on the third eye, or the heart chakra, depending on their character.  Tyagaraja likes to focus on taking in prana through the fontanelle, aka crown chakra. For the anahata, he says to focus on the space behind the heart, the size of grape, at the height of the third rib.

Let’s go to a longer mantra for Test #6. Om Namah Shivaya. This was one of the first mantras I learned and loved. I have several versions of this peaceful chant on my playlist, including a soulful rendition by yogi and musician, Sean Johnson.

Seems simple enough. 1) Om. 2) Na’-ma 3) Shi 4)Vay 5) Uh. Just like our asana practice is a never-ending learning space on the mat, apparently, the same is true with Sanskrit.

This classical mantra is a panchakshara. My Ayurvedic training taught me that pancha means five.

So that means five syllables.  The second half of Na-ma is cut short so that that word counts as only one syllable.  He also clarifies why some say shi-vay-uh and others shi-vay-ah.   The first is masculine and the second is feminine.

Wherever you are in your Sanksrit learnings, enjoy the vibrations, and the sounds, and the breathing.

“Vedic Heritage has not survived for thousands of years because it is antiquated,” declares Tyagaraja.  It has survived because even at Its most esoteric level, Vedic Wisdom is applicable here and now.”