Of course there are so many unforgettable and special moments in India. (Read my series on Men in Orange, for a few.) However, when I was traveling in India last year, I was feeling under the weather. There was a constant sense of chill, except for when tucked in bed. Plus, the dry air and dense smog wasn't good for my respiratory system. I dressed in lots of layers, took tons of Ayurvedic herbs, and stayed in my hostels once the sun went down.

After traveling thousands of miles within India, via plane, train, motorcycle and tuk tuk, there were two occasions where I felt blissful. Both were quiet times on rooftops. Neither site would have been listed in a travel guide. Although both were in towns that attract many tourists. Following is a recount of one. For privacy reasons, none of the images included are from that experience.

Unfortunately, I ended up being harassed by my guest house host for months after I returned to the U.S. To his credit, he was a perfect gentleman the entire time we shared space. And it was a lot of sharing. For a modest fee, on his tiny motorcycle, he led me on custom made full-day itineraries.

Special Moments in India, Left Alone on the Rooftop

One afternoon was perfect. Definitely one of those special moments in India. Especially for the cultural anthropologist in me. It was a Friday. The Muslim day of worship. He took me to his multi-generational family's small home. While he and his brother spoke excellent English, no one else uttered a word of it. That didn't matter. His mother made me a plant-based lunch. The men showered, and changed into stark white clothes. As the men headed to the masjid for prayer, my guide suggested I relax on their rooftop. 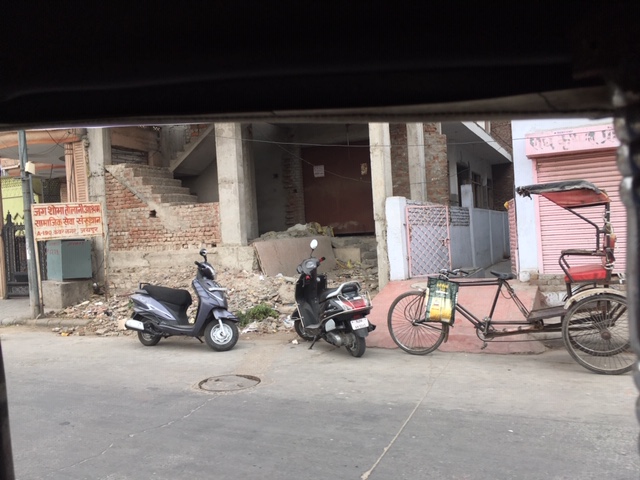 I walked up narrow steps. Sat on the flat surface that had no railings, ledges or walls. In Spanish, I call this an azotea, which is an Arabic word for flat or spread out. Typically, an azotea is used just to wash and dry clothes.

In contrast to the chilly air, I was surrounded by warmth. The sun on my skin and clothes felt like soothing hot chicken soup. The heat of the dark surface under my bottom and legs reminded me of me sitting on the radiator as a friolenta (sensitive to cold) kid in Chicago.

Surrounded by the warm calm, I did some breath work and yin yoga poses.

Then, one of his sisters came up to the roof and sat beside me. Via gestures, I understood she was recently married. I felt her soothing peaceful energy. There was something beautiful about her, despite her awkward features and missing teeth. I felt her gentle honesty and innocence. After a bit, she motioned that she'd return. When she did, she was carrying what seemed to be a bag of jewels. She unpeeled several coverings to show me her prize.

A wedding album*. Hers.

She was dressed exquisitely. It was as if she'd rented the finest apparel, jewelry, hairdresser and makeup artist and venue in another city.

She pointed, without touching, to each picture. Proudly saying the few English words she knew. Fa-ter. Bro-ter.

This was a very humble woman. In a very simple home. The animals in the courtyard were not household pets. They didn't have a flush toilet. Her neighbors lugged empty pails to a nearby watering pump.

Her wedding was her Cinderella moment. She and her family were at the ball until midnight. It was her storybook tale.

Most likely, this was her most awaited of special moments in India.

Special Moments Include Just Keeping Space for Someone

I felt a deep sense of comfort within --and connection with her -- sitting on the rooftop. It may have been an hour. Maybe two. I had no desire to even move. Nor for her to leave. Despite her rejoicing in the wedding, I felt her sadness. I read emptiness and sorrow in her eyes. They contrasted with what I saw in the album: positive anticipation, elation, hope, dignity.

Later, I asked her brother if she was visiting, or living here. He said she was temporarily staying in their family home. Her husband was in a city far away. To explain that, he voiced that the marriage wasn't what the family had expected. In India, traditionally, the bride's family pays a large dowry. Sadly, this family must have saved for years, wanting the best for their daughter. Apparently, the groom was a successful businessman. Perfect husband material for multiple reasons. But just like in the Cinderella story, nothing is exactly as it appears. Maya. The illusion. In her case, disillusion.