I read the book, “Eat, Pray, Love” after experiencing my own culinary delight on a yoga retreat in Italy, and exploring spiritual India for a full month.  I never made it to Bali. In fact, if I were to do it again, I’d Eat, Pray and Love all in India.

India is a gastronomical dream, especially for a vegetarian like me.

I don’t believe in Cinderella fairy tales, so I don’t condone traveling to find romance. However, love is central to many of the Indian spiritual teachings. Love of self, family, friends, living creatures, and the universe. As far as prayer, people of any religion — or atheists — can soak up the spirituality in India. India is the birthplace of several religions.

Much of the spirituality found in India is inclusive, rather than exclusive. Well-known gurus such as Yogananda and Neem Karoli Baba frequently cited Jesus. In India, the common ground is often treasured.

Forget the Traditional Guidebooks: Go with a Guru

Instead of reading Fodors or Frommers, let your guide be someone that is well-traveled and educated in spiritual India and its traditions. Someone who is a cross between your guru, friend, and entertainer to expose you to the scriptures, festivals, rituals, and the multiple branches of yoga.

Take a spiritual tour of India for a transformational, unforgettable trip. While there are many tour operators from which to choose, those mentioned in this blog do not live within the travel industry. They are people that breathe the spirit of India, daily. They share the teachings of India, daily. They are the real deal. I’ve shared space with each and would relish returning, with each.

Jogi is an Austin-based yoga instructor and therapist who has studied with renowned masters including TKV Desikachar. I’ve taken his therapeutic classes for several years. When he’s off the mat, he’s way off: 30,000 feet in the air. He’s visited 20 countries, but his homeland remains special.

“Organizing India trips is not work for me, it is a very rewarding process,” Bhagat says. “It is a real joy to take my yoga students and friends from the U.S. to India.  Some of them just asked me, ‘Why don’t you take us to India?’”

Bhagat has been leading small groups since 2012. Many are repeat tour participants or referrals, and he builds a sense of community among them, before, during, and after the departure and return dates. His tours offer much more than one yoga class a day.  This year, he’s doing back-to-back trips to Southern and Northern India.

There is a lot of personal touches that travelers experience with Bhagat. He has taken them to the spot in Rishikesh where his son’s first haircut took place. His participants have been treated like family at his nephew’s wedding.  Another memorable personal touch is celebrating Diwali (festival of lights), at the home of Bhagat’s sister. “This gives people an opportunity to experience the warm hospitality of Indians.  The guests are worshiped/greeted with lamp, flowers, and Tilak (head/body painting chalk) at the entrance of the home to experience ancient Indian saying in Sankrit – Atithi Devo Bhav (Guest is God).”

Bhagat serves the eating part of the trifecta on a big platter (thali).

“There is a lot of variety as far as Indian dishes are concerned,” he explains.  “Almost every state of India has its own special dishes.  We make sure to visit Chokhi Dhani in Jaipur, the Pink City in Rajasthan. While enjoying your favorite food here, you are entertained by typical Rajasthani music.”

Beyond restaurants, meals are served at ashrams and at Bhagat’s families’ homes. Whether the belly is empty or full, there’s always room to pray. Bhagat guides his cohorts through sacred prayer places for the Sikhs, the Bahai, and Hindus.  They chant in Delhi and in Rishikesh, and experience fire ceremonies.

Know before you go. India is not like Europe or the U.S. 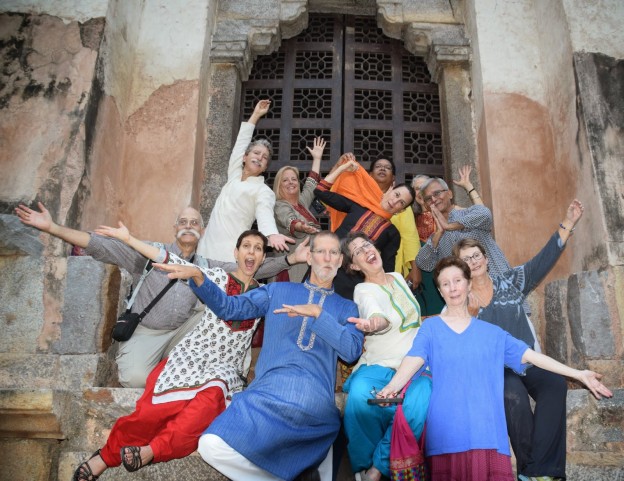 “While visiting places of faith, the participants always feel pleasantly surprised when they are encouraged to participate in religious ceremonies whether it is aarati or chanting.  They feel impressed with this inclusiveness of Indian places of faith.  A number of them found attending Sabad Kirtan at Bangla Sahib Gurudwara very meditative.  This Gurudwara has made special arrangements for foreigners and it makes them feel very welcome.”

Bhagat likes to see the love unfold through Karma Yoga (selflessness), one of the eight branches. Participants volunteer at the ashrams where they stay. As part of a two-day retreat with a yoga master in Delhi, they delve into topics such as the Purpose of Life which also gives them a deeper appreciation of love, in its broadest sense.

I’ve been fortunate enough to be with this ISKCON spiritual leader in India. Stateside, I have attended workshops with him, yearly, for four years. He’s also the author of the book, The Journey Home, which is a cross between Indiana Jones and The Little Buddha. What’s wild, to me, is that his book is 100 percent biography, non-fiction.  He will be hosting an India Pilgrimage with musicians that rock, Gaura Vani and Visvambhar (Vish), this January/February.

“We will be visiting the Govardhan Eco Village for the inaugural Bhakti Immersion festival –five days of diving deep into the essence of India’s Yoga traditions,” says Gaura Vani. “Next, we head to Mumbai for the epic Flower Festival where the dancing crowds are showered with two tons of flower petals. The week after that will be spent visiting the sacred sites of Maharashtra.

“One of the special things about this year’s trip is it’s focused almost entirely on sacred music. This is the first time we’ve been able to do this.”

Vish won’t have any free time. The day after this pilgrimage ends, Vish and Kish,  spiritual brothers who lead the energetic band known as the Mayapuris, begin another.  Vish and Kish live in Central Florida, but travel everywhere with their drums and harmonium for audiences of up to several thousand people. I was hooked on them several years ago.

February 8-19, the Mayapuris host a Heart of Yoga Retreat to South India and Mayapur. On their tour, they guide guests through ancient temples, stop at beaches, savor the finest in South Indian cuisine, chant, and learn to play the traditional Indian clay drum and hand cymbals. Among the many sacred sites on their itinerary, retreat goers can bathe in the Ganges. The retreat also includes daily yoga classes taught by a popular New York City-based instructor.

There will be time for shopping, enjoying the beaches, experiencing Ayurvedic treatments, attending workshops before they visit Mayapur, the holy city where both Vish and Kish spent part of their formative years at a Gurukula (Krishna learning center).

“This retreat is friendly to all. First-timers to India and to bhaktas (devotees),” says Kish. “We make sure that our retreats have a good balance of spirituality and relaxation. We give the best touristic experience that we are able to give. Everything is explained in a way that is understandable and our agenda is for everybody to have an enjoyable time.”

Since the Mayapuris are best known for their music, participants will savor live music during the daily yoga classes, and the band will give them hands-on workshops. “We teach how to play kartals (cymbals), mridanga (drum), and vocal lessons,” says Kish.

When it comes to eating, praying, and loving, that’s pretty much infused in everything they do. In fact, one of the translations of the word bhakta can refer to love. Love of the creator. Love of one another. Love of all living things.

“We encourage all to love the scenery, love the exotic and ancient places, love yourself by treating yourself to Ayurvedic treatments, love the Ganges river we will swim in, love the beautiful deities you will see, love one another on the tour, and love that you’re ready for an unforgettable adventure.”

Be ready for the spontaneity that India offers on a daily basis.

In many parts of India, the love for all living things mean vegetarian food. Since cows are sacred in India, part of the tour includes an eco-farm where the participants can learn how to milk protected cows.

“We eat traditional food of South India and West Bengal and also throw in continental meals to balance it out. We all love our toast, tea, and cereals,” says Kish who straddles life in India with that of the U.S. and Latin America.

On the prayer side, participants will be introduced to different forms of prayer.  “We do collective prayers in the form of kirtan (chanting) and in individual prayer with japa (meditation beads). We will have some japa workshops and encourage all to chant every day. Happy faces make it easier for all of us to Chant and be Happy.”

“We try to make dancing in kirtan as mandatory as possible,” jokes Kish.

It’s hard not to dance to the music of the Mayapuris. Their rhythms are almost hypnotic. Some have a reggae beat. Others are more traditional Indian styles. Overall, their music is reflective of the cross-cultural essence of the young people that form the Mayapuris.

A Vedic healer, Ayurvedic practitioner, and yoga teacher, Laura is co-founder of the Deep Yoga School of Healing Arts. Having been to India eight times, she considers it her home. The land is a place that she was drawn to all her life.

She offers two back-to-back retreats. The first week is an introduction to Ayurveda, that includes lectures, practices, and treatments at an Ayurvedic Eco-village. The retreat also exposes participants to many of the great sages and their teachings.

Those who join her will embrace and experience the spiritual sister sciences of Yoga and Ayurveda from a deep Vedic perspective. A graduate of the Kerala Ayurveda Academy and American Institute of Vedic Studies, Plumb has devoted her life to these teachings.

Be committed to spiritual growth and personal evolution.

“Our intention for this trip is to deeply experience Ayurveda and Spiritual Yoga from its source and dive into the incredible wisdom and light that India has to offer the Soul,” says Plumb.

To deepen one’s level of prayer and love, there will be plenty of bhakti, temple visits, and soul searching.

“We sing and chant as we travel,” says Plumb whose vocals are featured on her husband Bhava Ram’s CD. “We will be visiting temples of devotion everywhere we go.  I teach the bhakti and will envelop each day with it… but most specifically, that occurs in Rishikesh where we have aarati (prayer) every evening and sing beautiful bhajans (songs) for one hour on the banks of ma Ganga (river), with the dipas and the homas (fire ceremony) and all that bliss.”

This trip is designed to help one go deeper in their practices. They will be immersed in meditation, awareness, Vedic history, and culture, along with plenty of silence.

“If you are open and present to it, transformation is inevitable for all that with be joining us. The unfoldment of this transformation will be unique to the individual depending on their intention, desire, and willingness to embrace the internal shifts as they occur through their journey,” Plumb explains. “We hope to facilitate that evolution in YOU, including self-growth and awareness, personal liberation, and clarity of life purpose.”