However, I recognize that for many, that type of travel shakes them out of their comfort zone. Hence, picking a spiritual journey to India, with a group from the states, makes a lot of sense.

One trip that keeps coming into my wish list is headed by a yoga therapist from Austin. Over the last several years, I’ve attended his yoga classes. As a trained yoga therapist, myself, I can attest to his knowledge, and I like his demeanor.  I get the feeling that he’d be a very hospitable host and tour guide. Besides, he takes people to the India of his upbringing, and this isn’t about making money for him. It’s about sharing his love for his homeland with others.

Vacation of a Lifetime

Jogi Bhagat began coordinating affordable trips to India when people asked if they could join him during his visits back home. His past participants have wonderful testimonials, and he attracts participants solely from word-of-mouth. This November, Bhagat has a “vacation of a lifetime” in store for a small group of people. Sold out, he added a ninth tour over the holiday period.

True to his style, his guests enjoy breakfast at the home of his brother on the way to Agra (Taj Mahal) and lunch with his sister’s family in Delhi. He shares special sacred and cultural snapshots with them: arati (morning prayer) on the banks of the Ganges River where his son’s first hair cutting ritual took place, a visit with his family priest, and the temple where his family tree is preserved, turban-wrapping lessons, henna hand painting, and folk dancing. 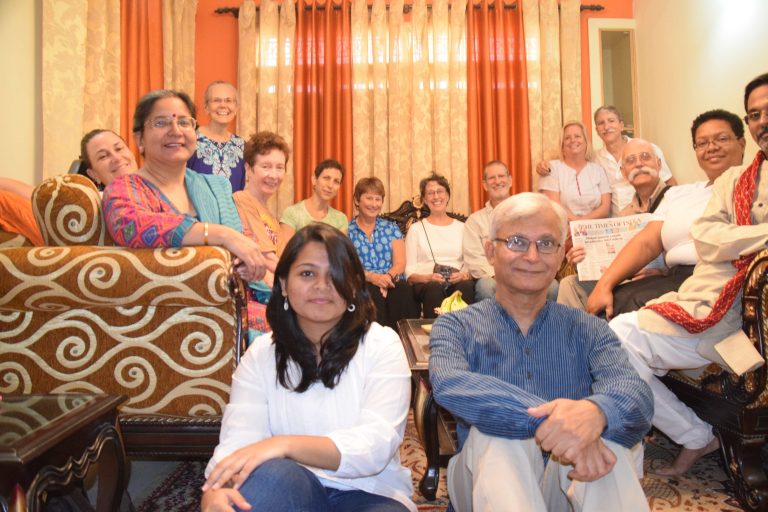 Finally, as a spiritual journey to India, there are many chances to deepen one’s knowledge in yoga and spirituality, learning alongside Jogi and others.

“India is a mystical land that has a living ancient culture in its many holy places and Ashrams.  At one of these Ashrams, we will attend a spiritual retreat under the guidance of famous Yoga Masters,” he says.

Bhagat’s coming of age as a spiritual journey to India leader is similar to that of Indu Arora. I first met Indu last year at the Yoga Therapists’ annual convention (SYTAR) in California and revisited with her last month at Bhakti Fest in Chicago.  Like Jogi, she’s an Indian-born and raised yoga therapist, living in the U.S.

“I never planned on taking a group to India,” explains Indu. “All I was doing was sharing my experiences and learnings, and I started getting people to ask (to go with). It was never a planned activity.  The intention is different. People wanted to see India through my eyes.”

“India is a discovery,” she continues. “You have to really peel it layer by layer. One aspect is such a sensory overwhelm. The senses are bombarded, whether in the former of taste, colors, sounds, beautiful places, different fragrances — people get drawn in.”

Before she moved stateside in 2005, she had never ventured outside the Indian sub-continent. Her guided tours are windows to her life and trainings, which have led her to publish two books on yoga.

India with the Masters

“This journey is based on how I have viewed India as I was growing up. My intention is not to go to places that are famous or talked about. It is all about how I have experienced India. What masters have influenced my life.”

Indu has a long history of studying with masters.  First, as a young child, she learned by watching her father practice his asanas and mantra meditation. She saw her mother incorporating Ayurvedic rules in their meals. She began a journal of home remedies, as a youngster, based on the traditions of her mother and grandmother.

At 16,  she was initiated in mudras and started studying kriya yoga. She moved to Pune to study with her master who taught yoga as a therapeutic modality. She soaked up the learnings.

“She used to teach from 6:30 in the morning until 1:30 in the afternoon, and from 4:30 to 7:30 at night.  I attended every single class for six months, and her private yoga therapy sessions. Every single thing I could, I attended. In the nighttime, we discussed philosophy until 1 or 2 a.m.”

By the time she was 19, her guru set her free. “She said ‘you need to start teaching. Go.’ I felt like a child. I didn’t think I was ready. Teaching is a different ballroom altogether.”

Hence, she took a train back home, and within 24 hours she had her first student. Slowly, she built her practice to teach up to 100 people daily.

One of Indu’s spiritual journeys to India offerings includes two weeks with her own guru.  “This is my base that has influenced me more than anything else in my life. To live with a living master.”

Accompanied by Indu and her guru, participants will visit one of the seven wonders of India, Rameshwaram; an Ayurvedic healing village; Jambukeswarar Temple in Thiruvanaikaval; Madurai, which some consider the soul of Tamil Nadu; and Kanyakumari, where three major bodies of water meet at the Southernmost tip of India. Indu considers this a two-week journey in November of 2017 as an amalgamation of the five elements, moving from earth, water, fire, air, and space.

Earlier in the year, Indu is leading a group to centers of enlightenment in Northern India. A full week on the Inspired India tour will focus on Hindu and Jain temples at Khajuraho, a UNESCO World Heritage Site in Madhya Pradesh, southeast of New Delhi.  Guests will stay at the Himalayan Institute’s Shri Vidya Shrine, and Indu will lead an intensive study on Sacred Indian Philosophy.

“This will be a rich tour with many other spiritual seekers and world travelers who are hungry for the past and present experience that India has to offer.”

Next, the second half of Inspired India will be dedicated to Neem Karoli Baba’s ashram in Kainchi, Agra’s Taj Mahal, and the holy city of Rishikesh along the Ganges River.

All Indu’s tours are transparent windows to her culture, and to help people find their own identity and spirituality.