In my last article, I spoke about finding thousands of Ganeshas in Varanasi. Unexpectedly. Beyond the Ganeshas, almost everywhere in Varanasi spirituality was overflowing.

“It is the headquarters of the Brahmin faith, and one-eighth of the population are priests of that church.*”

Just as I relished morning arati in Vrindavan, I woke up early each day in Varanasi. Here, mangala arati was on the holy Ganges.

“The Ganges itself and every individual drop of water in it are temples.*” 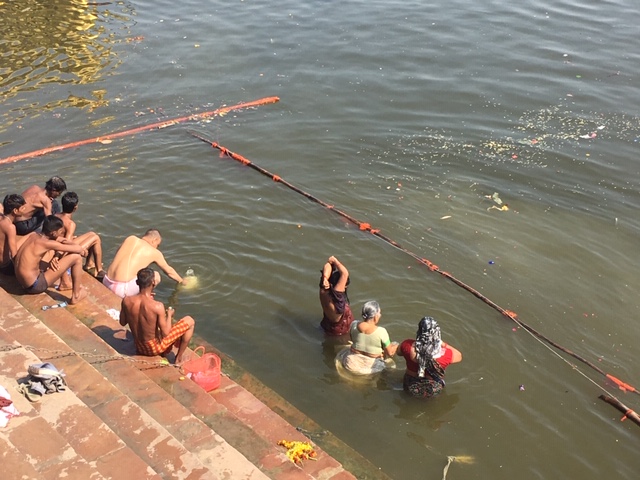 Before arati started, I strolled along the sand. In the pre-dawn hours, people carefully disrobed and blessed themselves by bathing in the river. Despite the fact that people, especially men, took dips into the Ganges under daylight, it seemed more sanctified prior to the first morning rays.

“All India flocks thither on pilgrimage…*”

The mangala prayer services in the two ever-so-holy towns of Vrindavan and Varanasi were very different. In Vrindavan, it was at the ISKCON temple. Prayer was filled with music and devotion to the deities. It appeared as if the vast majority of Vrindavan attendees were local residents. Both Indian and non-Indian.

Varanasi arati, however, attracted visitors. Albeit primarily visitors of Indian ancestry. Second, prayers in Varanasi didn’t begin at 4:15 a.m. like Vrindavan’s arati. It was much closer to the actual sunrise in Varanasi. Around 6:30 a.m. Furthermore, I didn’t notice deities in Varanasi. It was more of a fire ceremony.

In Vrindavan, after the main prayers, women and men formed different circles to circumambulate around a tulsi plant. In Varanasi, many stayed to listen to ragas, live, on stage. Next, it was yoga time. Men sat on lines of a red carpet. The women clustered together under a canopy. The practice included 30 minutes of pranayama. Then, 20 minutes of asanas. Rather than closing with savasana, each session ended with laughter yoga.

Evening arati was just as magical as the morning’s in Varanasi. I opted out of the touristy riverboat barge views of the ceremony, to sit alongside hundreds, or thousands, of Indians at the waterfront. The white smoke, set against the black night sky was beautiful. So was chanting among the enormous crowd of worshippers.

“Where this eternal light intersects the earth, it is known as Kashi.”**

In Varanasi, morning and evening arati were like bookends. In between, I strolled around the innumerable sacred temples. Some were in a near state of ruins. Others were hiding behind buildings or tunnels. Surprisingly, the most visited, Kashi Vishwanath, was hiding behind untold heaps of construction. And, a maze of visitors in the queue. Most likely, waiting at least an hour to approach the sacred space. The endless string of people inched toward the temple, barefoot, as slow as turtles.

Once past the security guards and magnetometers, we were rushed through the ancient golden temple. Certainly to ensure that as many people as possible could pass through this holiest of sites dedicated to Lord Shiva.

“Benares is the sacredest of sacred cities. The moment you step across the sharply defined line which separates it from the rest of the globe, you stand upon ineffably and unspeakably holy ground.*”

Being herded through the masses to catch a mini-darshan didn’t exactly get me to a state of blissful spirituality. Being one of just a handful of people at an ancient temple in Varanasi, did. Set amid grey rubble was a pristine orange pagoda-like temple. 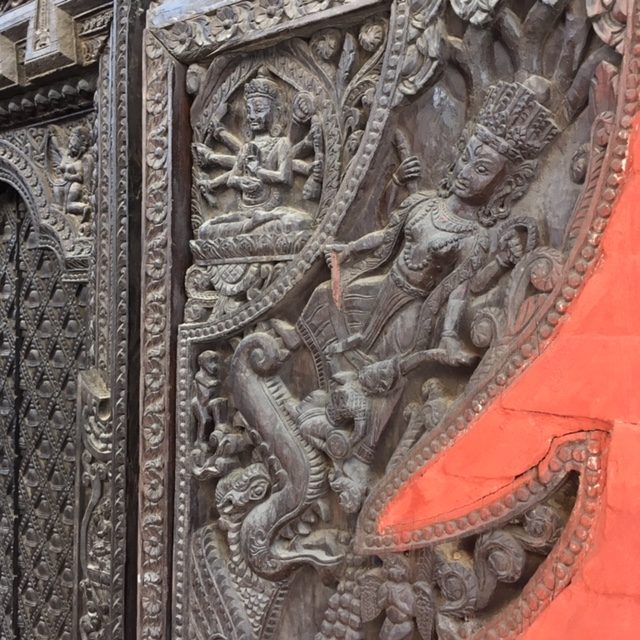 Near Lalita ghat was a Nepali temple. According to one local guide, “This is one of the oldest and unique temples of Varanasi as it is made up of woods. It is also called the replica of Pasupatinath temple (Kathmandu, Nepal).” Constructed by a former King of Nepal, it is a most peaceful spiritual place.

All in all, Varanasi made an impact on me. Definitely, a place I’d like to return to.