Surrounded by Ganesha in Varanasi

Saving the best for last on my spiritual tour of Northern India was Varanasi. AKA Kashi (city of light) and Benares. Hindus flock here for spiritual cleansing. Plus, this part of the Ganges is the preferred site for the cremation and/or releasing ashes. While popular among foreigners, spying on sacred burial rites wasn’t my cup of tea. Rather, a highlight for me was finding thousands of images of Ganesha and other deities. All in one small room.

After a lovely mangala arati (morning prayer ceremony), followed by ragas and yoga at the Ganges, I was in a state of bliss. I let my intuition guide me to a storefront (the only one I entered in all Varanasi). This was no shopping spree. It was a spiritual infusion.

In all, I spent more than an hour with brothers for whom their lives evolve around Ganesha, and other deities.

Ashok and Vijay are two of 10 Murtikar siblings. Appropriately, Murtikar means statue maker. Not just any statue, but sacred ones. For generations, the Murtikar men have been carving images of Ganesha, Saraswati, and Shiva out of stone.

Ashok is one of the elders. He has a wonderfully calming demeanor.

“All time, I sit with papa. Sometimes, I broke (the stone). ‘Again.’” His father would gently encourage him, just like an American dad may say to his child learning to ride a bike.

Creating gods out of stone is a form of meditation for Ashok. He has such a gentle nature and mannerisms. You can almost visualize how he delicately carves deities with utmost respect and devotion. Not all of what Ashok creates are rooted in his father’s teachings. Some evolve from his dreams.

You can feel his mindfulness in his presence, and in his speech. There is a grace that permeates the space. While Ashok oozes a meditative calm, the younger Vijay is different. He’s focused on Ganesha. He prefers paper to stone. And, he works at lightning pace. 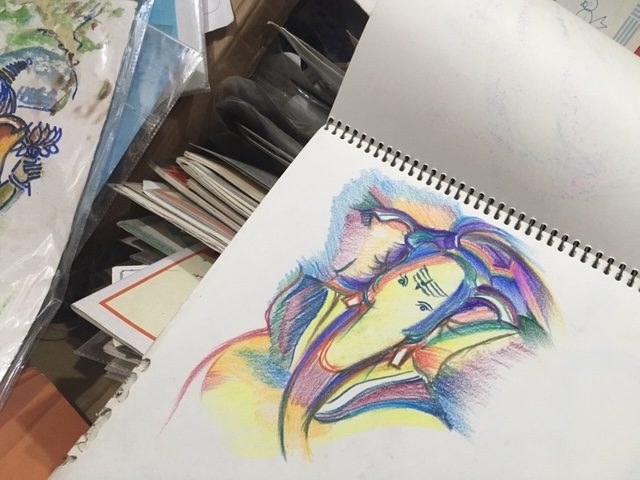 I’m enthralled with the back room where Ashok takes me. It’s behind the showroom. It looks like a library. Seems full of Vijay’s treasures. There are shelves, floor to ceiling stashed with drawing pads. Piles of loose drawings or sketchpads fill the floor. It’s hard to imagine how many drawings are in this one room.

All are Vijay’s work. Furthermore, all the drawing books are filled with sketches of Ganesha. The overcomer of obstacles. I was mesmerized by the idea that one person would spend their life drawing only images of the elephant god with a twisted trunk.

A good percentage of the drawings are monochromatic. Yet, others feature bold colors in geometric shapes.

I was in a meditative state, sitting on the floor, rummaging through his deities. This was the most comprehensive collection I could imagine of the iconic elephant on top of a mouse. I was in awe of Vijay’s unparalleled production of Ganeshas. In fact, the marathon Ganesha artist said at times he draws Ganesha for “51, 54, 56 hours non-stop.” 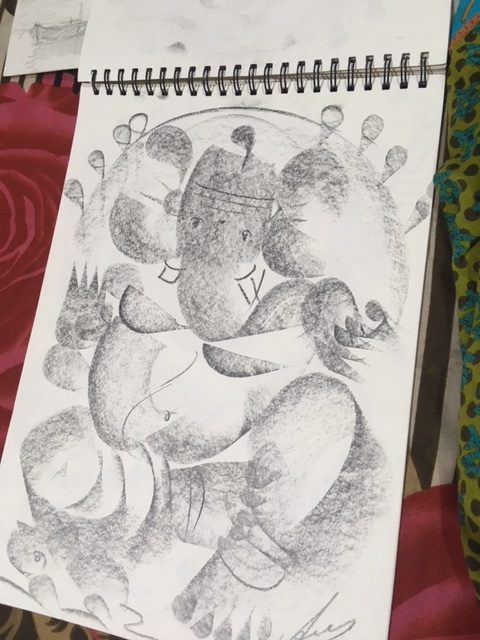 Apparently, he wasn’t as interested in the stonework of multiple generations of Murtikar men. Most of all, his mother was a great influence. “Your mother is your first, first, and first teacher.”

Nonetheless, he credits both parents for his affinity toward Ganesha. “I see Ganesha everywhere…my parents always worshipped in front of the Lord Ganesha before starting any work on any new sculpture,” he told another newspaper.

“I make a lot of exhibitions.” Actually, three times he was invited by the government to display the elephant deities in a museum in the holy city of Dharmasala (where the Dalai Lama resides). His art has also been shown in Thailand and the United States. The man with Ganesha in his heart may draw 100 images before he selects just the right one for an exhibit.

Not only is he prolific, but he’s also protected by a higher source. Or, rather, his Ganeshas are protected. Actually, one of his drawing books is badly worn away from critters. The edges of dozens of pages are frayed. Yet, Vijay smiles as he says no mouse has ever touched the images of Ganesha.

His personal collection of Ganesha and other deities, on paper and stone, he estimates at more than 51,000.

“Art is the way of the life. Hidden beauty. Spiritual height,” for Vijay. It also seems to be his drug. It powers him. Gives him his spiritual and physical well-being. Regardless of what fuels him, he notes that there are messages in his paintings. Sometimes, painting to the sound of tabla drumming helps reveal messages. “All my paintings have a story.”

One Ganesha, he explains, relates to our body. The five elements, like auras, against a full sky.

First off, colors all have meaning.

“There is depth in light. All religions love white,” which he equates to sweetness. Black and white, too, is important. Red stands for equality. Because we all bleed the same color. Green is happiness. Orange is luck. Not surprisingly, blue represents water and sky.

Moreover, the thought behind the art is extremely important.

Finally, he vocalizes his own sense of meditation through art. “I’m never disturbed. I’m an artist.”

Read more about spiritual India, including words of wisdom from Men in Orange.