Svadhyaya or Self Study on the Road

Svadhyaya is one of the niyamas in Patanjali’s yoga sutras. Often translated as self-study, there are many paths to svadhyaya.

Since my high school days, I’ve found introspection away from my home.  Whether practicing breathwork on the beach or rambling up and down city streets, solitude and fresh air are helpful to me. I also believe that stirring the pot up can help pull aside the maya (illusion) that can cloud us.

I’ve experienced several major transformations in my life, each when I was out of my comfort zone. You can’t schedule those personal shifts, but you can set the stage and open the door for them.

That’s why, for my daughter’s most recent birthday, I wanted my present to be ever-lasting. A stepping stone toward svadhyaya.

I offered her a trip anywhere in the world. Not as a tourist, but as the elixir for transformation. Not sleeping in chain hotels, but in the community, with the community. Not a guided tour, but guided service (seva or karma yoga) to help people in other parts of the world.

My premise was that a service project far from home could be a magnifying glass to introspection. I’ve lived and explored much of the world, as has my daughter, and I hope my approach has been a life-changer for us both. But there’s always room for more self-study at any age. 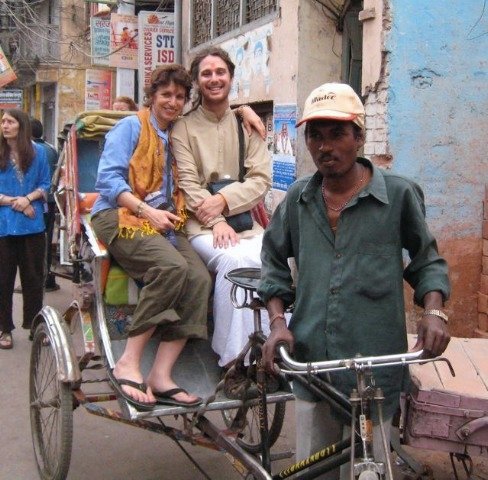 Joss Jaffe, with his mother Evelyn, in India

Joss Jaffe is a musician and kirtan artist. He grew up in the yogic world and benefitted from many road trips with his parents, who were on the path to self-awareness.

His mom, Evelyn, was an early practitioner of Yin and Ashtanga and was one of the first Anusara certified teachers. She met Swami Muktananda in the ’70s. So naturally, she spread her love for all things yoga with her children. Joss recalls visiting Siddha Yoga ashrams in California and New York as a kid.

When Joss was 27, he spent several months in India. His dad met up with him in Chennai for Music Season, a six-week-long Carnatic festival begun in 1927.   Then, Joss took a 24-hour train ride north and met Evelyn. They spent more than a month “ashram hopping” from Pune to Varanasi. One of the highlights was when Joss sang and played tablas at the Janglidas ashram.

Joss wrote travelogues about his road trip, to share his experiences with friends and family.

“What ensued was too much to recapitulate but included the opening of a beautiful ashram, a 5-day silent meditation intensive culminating in a Shiva Ratri fire ceremony (yagna) and an all-night meditation, which was one of the most difficult and rewarding things I have done in my life.   The conditions in the villages and the work being done there moved me very deeply and I am now planning out ways that I can participate in their fundraising work, particularly through music.”

Looking at Joss’s array of musical productions, the markings of his transformative road trips with his parents are obvious.

Missy Balsam is another kirtan artist, and yoga teacher based out of Florida. I met her and her mom, Pam, at a yoga festival last year.  A sacred journey for both of them was fresh on their minds. Missy invited her mother to India for a pilgrimage led by Saul David Raye.

“I was always the type of person that did what I was supposed to do. I just followed the rules,” admitted Pam.  “I think of myself as a late bloomer. Now, I’m learning to express myself and follow my heart. My daughter has become my teacher. And it only made us closer.”

Growing up isn’t just about childhood. People can continue to grow and transform throughout their lives. It’s especially beautiful if the process can be shared and mutually respected with family members.

Where will your next road to svadyhaya take you, geographically, and internally? Comment, below.