The Benefits of Kirtan Chanting

Chanting is not just about “music to our ears.”

There have been many studies pointing out the connection between the physical and the spiritual.

Dr. Andrew Weil, in his book, “Spontaneous Healing” says “During my travels throughout the world, I have met many healers who believe that the primary causes of health and illness are not physical, but spiritual…Mystics and spiritual adepts teach that it is possible to raise spiritual energy, to increase the rate of vibration.  One way to do this is to put yourself in the vicinity of persons, places, or things that have high spiritual energy.”

That sounds like sangha during kirtan or Satsang.  It doesn’t have to be East Indian style, either. Across cultures, geographies and eras, there was a very special place for chanting. It doesn’t matter what religion, or what language.  People chanted, and lo and behold, even miracles occurred.

The benefits of kirtan chanting are many.

“Chanting creates community,” says Sean Johnson, who has a Master’s degree from The Naropa Institute in Creation Spirituality with a focus on teaching chant. “Singing together, we merge with each other and entrain with the divine vibration. Kirtan is a most sublime form of Satsang, gathering with fellow seekers and reaching deep together through song. There’s a vibrant exchange, a transmission of energy circulating back and forth from hearts to hearts.”

The New Orleans-based musician and yogi is leading an intensive at Bhakti Fest Midwest in Madison, Wis. He will share a wide array of bhakti practices including a singing attunement practice rarely taught outside of India.

“In a loving, supportive environment, we’ll invite you to slay your fears and awaken the creative power of your singing voice,” says Sean.

His workshop is meant to tune your heart and rekindle your soul.

For some, it may also be a game changer.

“One of our students shared with us that after doing several of our trainings the practices gave him the courage to face his fears of coming out of the closet to his family. Other students have quit jobs or ended relationships that didn’t feed their heart and followed their heart to more fulfilling ways of devoting their time and energy.”

Maria is a singer who grew up in an era when women followed their husbands. With her husband’s permission, she became an avid follower of a tradition of meditation and sangha. At one point, she followed her heart. She left New Mexico with her family and applied for law school. Later, with a newfound financial and emotional independence, she filed for divorce. She attributes her life changer to her spiritual practice.

I can relate to the aforementioned stories. I was attending weekly Satsang. Sandwiched between rounds of kirtan, spiritual leaders discussed ethics. My soul was rumbling with discomfort. Sitting on the cold tile floor of my ashram, I possessed the courage to say farewell to my job of 15 years.  Shortly thereafter I set the train in motion to build my own consultancy that would allow me to represent accounts that jived with my moral compass.

This is not unusual. Sean says that mantra practice can help one to more consciously manifest patterns of purpose in our lives.

“I believe that the sonic practices of yoga can help us to be better listeners both to our own intuition as well as each other, help us to communicate with more clarity, truth, and compassion,” adds Sean. “Tuning the heart means developing a resonance and sensitivity to our intuition and the wider Universe. It means feeling the full spectrum of our heart, getting in touch with what we love, and getting clarity about where we want to invest our precious time and energy. When we’re in tune, our actions are aligned with our words and our thoughts. When we’re in tune our life becomes more graceful and requires less effort. We can live with greater purpose and clarity.”

Buffalo Thunder is a Grammy-nominated percussionist. 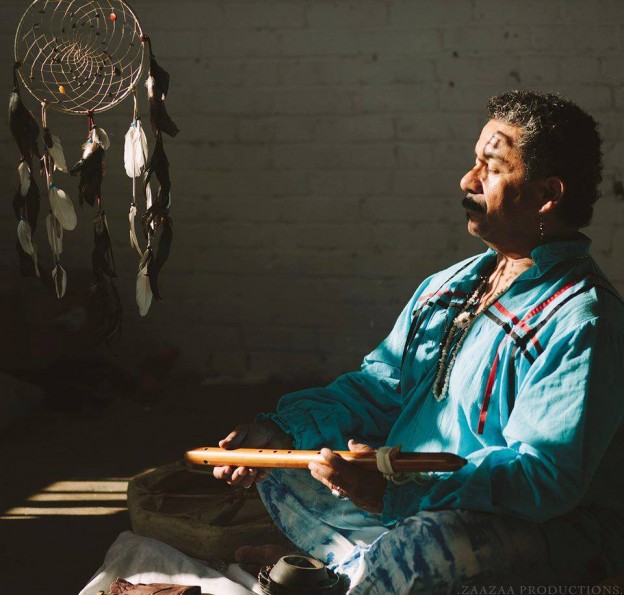 Buffalo Thunder is a Grammy nominated percussionist and shaman

He’s also a fifth-generation Native American healer. He has been a conduit for healing through both kirtan and native drumming circles, accessing theta waves that are usually dormant in the average person. He gives several examples of life changers.

“I have been blessed to have worked with an autistic child, which ended with him, his father, and me all drumming, while his mother took pictures, tears streaming down her eyes,” he says. “I worked with a young man that had severe frontal lobe damage, come to be able to communicate with his mom after eight months of weekly sessions. I was able, with a wonderful small group of drummers around a campfire, to witness a major breakthrough for a veteran with PTSD.”

Buffalo Thunder’s mother joined him for three kirtan gatherings before she passed. “Kirtan made her Spirit soar and her heart was open. After that, we would start each day with a singing bowl. She said it would take her back to the peaceful path of ‘that wonderful Indian music.’”

The grief that set in following his mother’s passing was also addressed via kirtan. “As a Shaman, I knew what I needed, but not quite sure how to achieve the unification, the communication, between my heart and my mind. Kirtan provided the link, the pathway for me to express, heal and embrace the peace knowing that as I played, and as I participated in Kirtan, the prayers were the most incredible joy that came into my life at that time.”

Sean recognizes the cathartic and liberating power that comes with the chant. “Kirtan is good for our health– the mantras vibrate and massage our muscles, tissues, bones, and organs.”

The shaman percussionist sums up the healing power of chant in one word: “amazing.”