Part Six of Journeys with Men in Orange is the last that features two monks. My group was fortunate. We literally traveled with two men in orange for much of our trip. Shyamananda Das and Chaitanya Charan Das shared their words of wisdom, in open-air classrooms. They spoke about love, religion, karma , and more as we crisscrossed northern India. The last topic in this installment is about Krishna in the holiest of cities: Vrindavan and Govardhan. The images here are all from those areas as well.

Shyamananda Das and Chaitanya Charan were born and raised in India. They left behind the material world to become Vaishnava monks 30 years ago.

Chaitanya was a brilliant engineer. Nicknamed the Spiritual Scientist, he is the author of 25 books. Additionally, he posts video blogs and online articles. One of his Facebook pages, for example, has 750,000 followers.

Shyamananda is the translator of many books written by ISKCON’s founder, Srila Prabhupada. Shyamananda serves as ISKCON Chowpatty temple president in Mumbai. However, he travels worldwide to lecture on spirituality. He will be in New York City in the month of May. 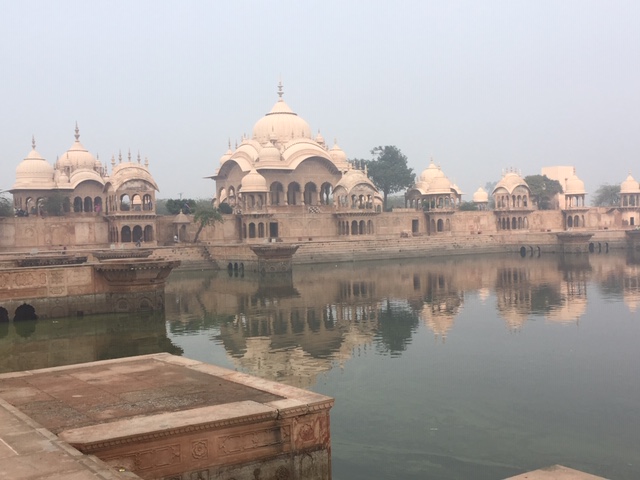 The word Govardhan means where cows flourish. Go refers to cows. It is the root of many common words. Gopis (cowherd girls/milkmaids), gopala or govinda (cow protector), gomukhasana (cow face pose). Vardhan means flourishing. So it’s an appropriate spot for stories about Krishna and the gopis.

Moreover, Govardhan is one of the most glorified places among Vaishnavas because of an incredible tale relating to young Krishna. Popular belief is that Krishna* protected people from a deluge by lifting the hill in Govardhan. What makes this story even more incredible is that Krishna was only seven when this miracle took place.

A brief summary of Krishna in Govardhan.

Miracles are not AGAINST science. They are ABOUT it.

Villagers were preparing for a harvest festival and needed rain. Krishna manifested rain, but the rain god, Indra was angry with him for sending the festival to Govardhan. As a result, Indra retaliated with thunderbolts and lighting. The storms represented his anger toward Krishna.
Kusum Sarovar, in Govardhan, India

Unnerved, young Krishna calmly lifted up the hill in Govardhan with his little finger. In effect, he formed a giant umbrella to shelter the devotees. Not only did he raise the hill high, but he kept it suspended for seven days and seven nights.

Hence, the reference to Govardhan can be an analogy to problem-solving — and faith.

“If we try to battle a problem, if we turn to prayer and connect with meditation it leads to relief and calm. Remembrance of God is like a shock absorber. Just like the rain falling, but people were protected. In due course, problems go away, just like the rain,” when one focuses on God.

As the Men in Orange explain, “God is beyond the law of nature. God gives us gravity and can remove it.”

“If Krishna lifted the Govardhan Hill, a reductionist scientist would find is, how did Krishna find out the center of gravity to lift the Govardhan Hill. Krishna doesn’t have to find the center of gravity, because He is the source of gravity, He can make gravity operate and He can make the gravity stop whenever he wants, but the science doesn’t accept this principle. They think that even if God exists he does not interfere with nature. Nature operates according to naturalistic or material factors.”

The name Vrindavan has as its root, Vrinda which is another name for tulsi (holy basil). Today, most Americans have heard the name tulsi. Tulsi Gabbard is the first Hindu elected to Congress and is a candidate for the 2020 presidential race. She and her sister, whose name is Vrindavan, were raised to cherish this small town in Uttar Pradesh, India.

It is said that there are 4,000 temples in Vrindavan. Quite a bit, especially for a population of only 60,000. Of course, these temples are all sizes. From simple shrines to mega-monuments of worship that attract a large number of pilgrims and Vaishnava devotees each year.

Why? First and foremost, Vrindavan is where Krishna is at home. It’s his playground. This is where he enacts his Lila (divine play/pastimes).

We frequently identify Krishna as the little pudgy blue boy with glistening black hair and huge loving eyes. One of the reasons why we see Krishna as a child so often, explain the monks, is so people can have different relationships with him. Certainly, Krishna is more identifiable, and even loving, when we envision him as a young child, pranks and all. He may be “all-attractive” but not intimidating.

He even plays “dress-up,” again, possibly to help people better identify with him. Once, at Kusum Sarovar, Krishna was disguised as a gardener. He told the gopis not to pick the flowers. Only Radha recognized him, by his hidden flute. She responded saying they were Govardhan Hill’s flowers. Krishna responded with a prank to all the gopis, and decorated Radha with garlands of flowers.

Thus, Krishna can reciprocate with each and everyone according to their individual requirements. He delights in the reciprocity of love, just like with his beloved cows. His reciprocity and love are unlimited.

Krishna as Myth, or History

“That Krishna is historical, not mythological, has been verified by rigorous research conducted over the last several decades in several independent and concurrent sources,” cites Chaitanya Charan on his website. “Krishna is much more than a historical personality.” He’s transcendental. He is one-stop shopping for all your requirements.

Furthermore, Krishna never does anything that results in misery. Whatever is spiritual that we are seeking out, that’s in Krishna’s realm.

Finally, Vrindavan is also a special place for these two Men in Orange, because of its relevance to their teacher, Radhanath Swami. In 1971, the young American in search of something more was at the ancient temple in Vrindavan, Madan Mohan. He’d already met many a self-proclaimed guru. None cut the mustard until he met Srila Prabhupada.

Radhanath Swami lived in Vrindavan with two babajis. They had no electricity. No water. As a sadhu, he walked down the mountain to beg for meager food. He slept with a stick to protect himself from a roving man-eating leopard. Radhanath Swami was fearless, because of his faith. Radhanath Swami became a Krishna devotee at the Madan Mohan temple. Millions have caught a glimpse of the hilltop temple on the cover of his best-seller, “The Journey Home.”

The next installment of Men in Orange will be Radhanath Swami’s own words on why people should visit Vrindavan.

The words Krishna and God are frequently used interchangeably.