It should be no surprise that I am a major proponent of complementary and alternative medicine treatments (CAM). To me, they are neither complementary nor alternative. Most often, they are my first choice. As a holistic coach, trained in many modalities, one technique intrigues me: tuning forks.

I experienced an acupuncture session with forks. Only once. Maladies troubling me for many months disappeared after one treatment. I cannot prove that the outcome was from the forks. But, I give the tuning forks the high five.

Getting Back in Tune

My last trip to India got me out of whack. We are not talking about a virus I caught, or bad food I ate. An unhealthy travel schedule turned my dinacharya (daily routine) upside down. Even though I trek the world without losing grip on my dinacharya, this trip tossed my routine into a Vitamix. As a result, my nervous system (and vata constitution) were scrambled and fried.

I’m not a travel wimp. I have walked cobblestone streets in Italy for ten hours a day. In California, I have enjoyed strenuous yoga practices in the 100 degree heat from 7 a.m. to 7 p.m. When I'm in Latin America, I have climbed volcanos. On transatlantic flights, I may lose a night's sleep, but and ready to put in a full day of work when I land.

But something went haywire in India. From those first inklings of something "off," I tried to level out the imbalances. I was first in line, before opening hours, at an Ayurvedic clinic. The doctor concurred with my self-diagnosis. He prescribed a handful of herbal remedies and daily head and body massage therapy.

That helped. But the scale continued to weigh on the side of internal disorder. I skipped my travel group's farewell dinner to bury myself under the covers at 6 p.m. — an anomaly for me. The next day, starting my solo journey, I made a beeline for an Ayurvedic pharmacy. Every night, I was resting in bed by 7. My super strong energetic self was missing. For many months.

Back home, I rested in bed every day. I felt as if I had mononucleosis. But, when I had mono in college, I felt A-O-K.

I couldn’t get my groove back. I had no strength. After stooping down to move my welcome mat, my blood pressure plunged to 60/40. My heart was racing just from moving a planter.

Needling Brought Me Back to My Normal Self

Finally, at the urging of my medical practitioner partner, I went for lab work. A TB test. Chest X-ray. Lung MRIs. Complete blood work and adrenal fatigue test. The results were as expected. Normal. Yet, I felt so un-normal -- until my acupuncture session with the tuning forks. It was as if I was pushing a boulder, inch by inch. The needles and forks gave me strength to propel that heavy rock up and over the hill.

Everything in the Universe Has a Vibration

Erica Longdon is a U.K.-based meta-physician with a passion for tuning forks. Her new book, “Vibrational Sound Healing: Take Your Sonic Vitamins with Tuning Forks, Singing Bowls, Chakra Chants, Angelic Vibrations, and Other Sound Therapies," spells out the benefits of forks.

Erica incorporates tuning forks in massage therapy and reiki. She finds these body tuners are an excellent tool to release tense muscle tissue. Not surprising if you consider that sonar waves can break up kidney or gall stones, dental plaque, and assist with cataract surgery.

Additionally, she points out that “sound healing works on the principle that everything in our universe is energy that has a vibration. Sound has been scientifically proven to have an effect on our autonomic, immune, and endocrine systems in addition to the neurotransmitters in our brain. When an organ in the body is out of harmony and not working as it should, its sound pattern will be distorted. It is in a state of disharmony or disease. The reintroduction of the right sound pattern will help it realign and return to harmony and health.”

Long before people were eating with forks and knives, they were tuning with forks. Erica says there are images of tuning forks on ancient Egyptian carvings and that tuning to heal dates back to the time of Pythagoras, around 500 BCE. The Greek philosopher and mathematician discovered the Pythagorean theorem, the Theory of Proportions, the sphericity of the Earth, and Pythagorean tuning.

According to Erica, the original tuning forks were likely made using the Pythagorean frequencies of 8, 16, 32, 64, 128, 256 and 512 Hertz (Hz). Those frequencies are aligned with the Schumann resonances (SR). Erica describes SR as the “vibrational soup in which we live and without which we cannot thrive.” Schumann resonances are the frequency of our planet and recognized by rocket scientists.

For example, the NASA.gov web site states, “This resonance provides a useful tool to analyze Earth's weather, its electric environment, and to even help determine what types of atoms and molecules exist in Earth's atmosphere…scientists have discovered that variations in the resonances correspond to changes in the seasons, solar activity, activity in Earth's magnetic environment, in water aerosols in the atmosphere, and other Earth-bound phenomena.” 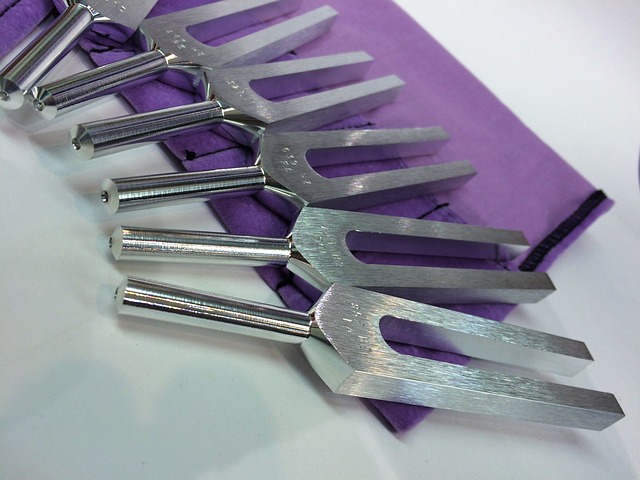 Today, tuning forks are set to multiple frequencies to impact different chakras or auric levels. Some healing practitioners use the Solfeggio range of nine forks (which includes 528 Hz). Solfeggio notes are similar to those in “The Sound of Music's” Do-re-mi-fa-so-la-ti-do.

The Solfeggio scale is symbolic as the frequencies relate to numerology from the bible's “Book of Numbers.” Erica says the lower two frequencies “impact deep emotional wounds which may, or may not, present as physical pain. The next three forks prepare a fresh vibrational field for the body, including the 528 Hz fork which can reset DNA, and thereafter, the forks lift the being into greater harmony in all relationships with life and spiritual growth.”

She typically works with forks within one scale (Pythagorean vs Solfeggio) during each session. She says the Pythagorean scale is especially beneficial for physical symptoms, and the Solfeggio for mental and emotional reset.

When I lead my First Love Yourself workshops, I incorporate 528 Hz music from the Solfeggio scale to open the heart chakra. On the other hand, I choose 432 Hz (a Pythagorean frequency) for deeper relaxation restorative yoga sessions.

According to Erica, 432 Hz is the preferred frequency for sound healing — and symphonic music. Beethoven was a fan of 432 Hz. Usually, the Stradivarius is set to 432 Hz. That places the middle C on a piano at 256 Hz.

“432 Hz is the original and more natural tuning for musical instruments. When a musician talks of ‘being in tune’ they are talking about a standardized note,” Erica says. For some reason, the A nowadays is usually set to 440 Hz versus 432 Hz. “The standardization happened in relatively recent times. There are opinions and conspiracy theories surrounding this event. Whatever the truth, 432 Hz is much kinder to a singer's voice.”

Plus, sound therapy is kinder to your body, mind, and soul than many other forms of therapy.  “Sound is a healing gift, present in every moment, freely available for all to use. Sonic vitamins are an often inexpensive and easy way to incorporate the healing benefits of sound and vibration into your daily life,” Erica says.