Pretty sad, considering apple pie and pizza contain fruits and veggies, though I wouldn’t recommend, or eat, either.  Maybe that cherry empanada was the only fruit serving, and the shavings of iceberg lettuce sprinkled in a taco or burger was the only vegetable.

Fortunately, the San Antonio Mayor’s Fitness Council (MFC) is trying to make a difference. Beyond all the other health and nutrition-related activities that the city is doing, now, San Antonio is calling on its residents to Veg Out.

Veg Out is a campaign, launched today by Mayor Ivy Taylor at City Hall, to educate our residents about the benefits of fruits and veggies.  Mayor Taylor, and the MFC, want to make our city one of the fittest, rather than the fattest cities in the nation. One of those routes is for all of us to eat more fruit and vegetables.

“We’re fighting a host of diseases,” said Mayor Taylor.  However, people can make a difference, “by choosing to eat an apple a day…a smoothie…a salad..” Mayor Taylor also emphasized that eating healthy does not need to be expensive or difficult. She showed samples of what $40 worth of fresh produce looks like and admitted that she was going to place more attention on her own diet to impact her own health. “It’s easy and affordable,” she said.

According to the Harvard School of Public Health, there is compelling evidence that a diet rich in fruits and vegetables can lower the risk of heart disease and stroke.

You don’t have to have a Harvard degree to recognize that eating an apple a day, keeps the doctor away. My generation grew up seeing Popeye’s muscles pop out after downing his spinach. Most people understand that eating fresh fruits and veggies is important, but it’s way too easy to swing by the drive-thru and order a Happy Meal or Dollar Meal, and mindlessly scarf down a zillion calories, carbs, fats, and sodium. If it all fits into one hand, it can’t be too bad, some may rationalize. 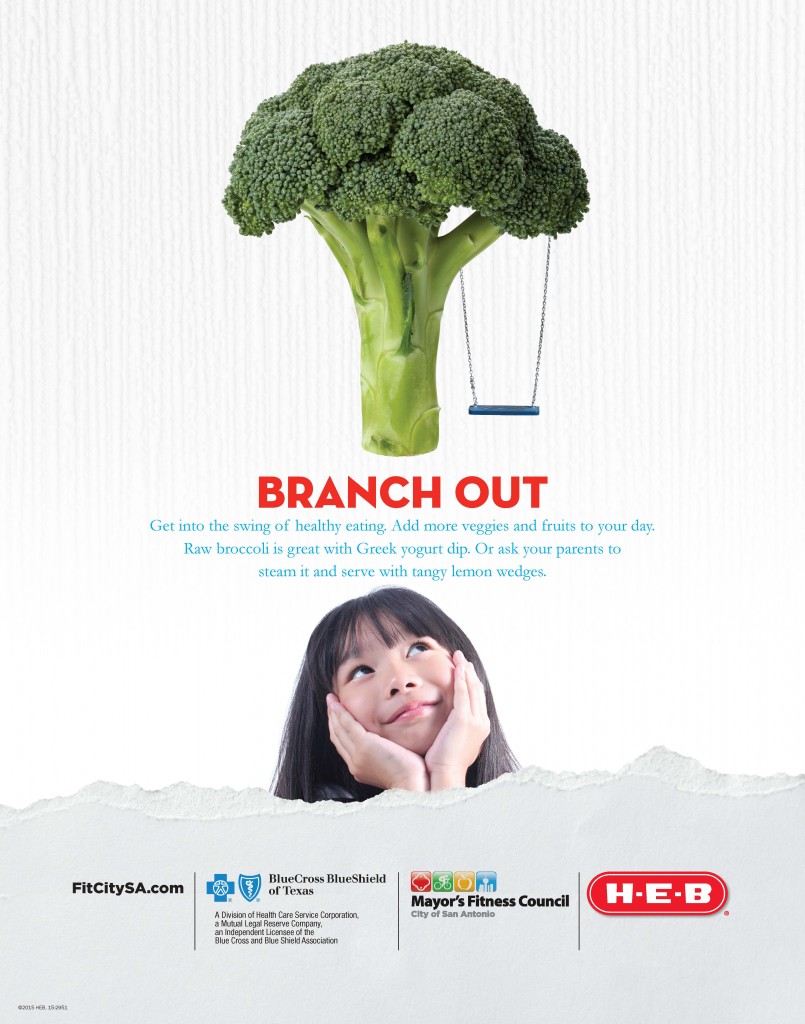 For those that cook at home, many of us take the easy way out and pop something pre-packaged in the oven or microwave without inspecting the nutritional information label. When we cook from scratch, that doesn’t always mean it’s healthy, either. We may say, if grandma cooked with all that lard or butter, there’s nothing wrong with it.

Before I get off my soapbox, I have to underscore that Americans have been led to believe that it’s all about protein. We consume twice as much protein as required. The dairy and meat industries have poured billions into advertising and lobbying so that even the USDA’s official food pyramid was lopsided.

Here in Texas, we think the more beef, the better. Registered dietitians suggest a serving of protein as a thin piece, the size of the palm of your hand. Yet it’s common for restaurants to serve up to four times that size on your dish, and we think that’s normal.

Many believe that dairy and meats equal protein. Yet, there’s a long laundry list of plant-based foods, such as broccoli, that are far more packed with protein than what comes from the slaughterhouse.

San Antonio is reported to be one of the most obese cities in the US, with 65 percent of adults being overweight or obese. In my book, obesity is the shortcut to cardiovascular disease and diabetes, and diabetes affects about twice as many people in San Antonio as the rest of the U.S.

Today is also the day I launch my six-week series of workshops on weight management, in which nutrition plays a key role.

A balanced dish is not a quarter pounder, fries, and a coke. There are many different nutritional “pyramids” or “dishes,” but for anyone prone to diabetes, or with existing high blood sugar, I recommend half of the meal be low-glycemic fruits and nutrient-rich veggies (NOT iceberg lettuce) prepared with minimal oils if any. Reserve just one-quarter of the plate, each, for some complex carbohydrates (nothing white) and your low-fat protein. Re-think what’s a protein. Quinoa is an outstanding form of protein, as are most all dark green vegetables, nuts, and beans.  To get some great meal ideas, recipes, and learn why you need to increase veggies and nuts, and reduce your animal protein, read Dr. Furhman’s books, “The End of Dieting,” “Eat for Health” or “Eat to Live.”

Be on the lookout for Veg Out billboards and public service announcements, in English and Spanish, sprouting up around the city. More importantly, make the resolve to be fitter and to help your friends and family to be in better health, by Vegging Out.

The San Antonio Mayor’s Fitness Council was formed in 2010 with the mission to lead San Antonio to be one of the healthiest and most active communities in the nation in which residents, groups, and organizations work collaboratively to achieve targeted health and fitness goals.

As an avid promoter of well-being, fitness, and nutrition, I’ve been a part of the city’s mission since the chalkboard (SA2020). For recipe ideas and more information on healthy eating and diabetes, or my workshops visit www.TheNamasteCounsel.com/articles or https://thenamastecounsel.com/yoga-blog/.  To keep up with the latest on Veg Out, including upcoming contests or to download free campaign materials, visit www.FitCitySA.com