Austin, Texas, less than an hour away from The Namaste Getaway, is a smorgasbord of vegan and vegetarian treats. Every time I head into the city, I satisfy my taste buds with a variety of eats, and buy plenty of plant-based gluten-free items to take back home.

I moved to Texas in 1998. San Antonio to be precise. Back then, there were no vegetarian dining spots in the Alamo City. (Today, there are plenty.) So from my early days in Texas, I relished visiting Austin to get the kinds of foods that are too laborious for me to make for myself.

My long-time favorites are Mr. Natural and Juiceland and I pretty much swing by one or both on every drive in or out of Austin. 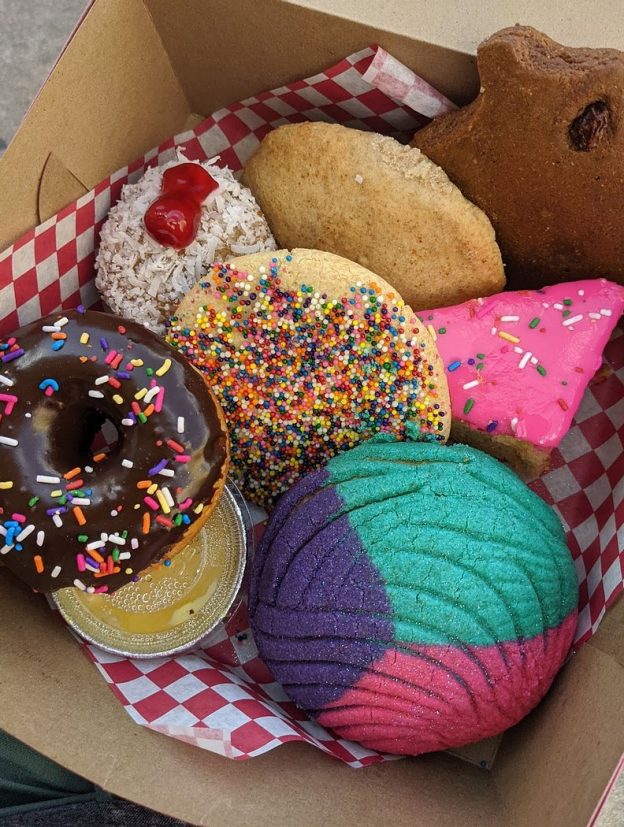 Mr. Natural has two locations. One on South Lamar, and the other, on East Cesar Chavez. Both Mr. Naturals have an assortment of health food grocery items in the freezers and pantry shelves. But the East Austin spot expanded to include a huge store next door filled with herbal remedies, supplements, informative books, and more.

Before Covid, the lunch buffet was a big hit. For one low price, you got your choice of salad, two sides, and a main dish, most of which were veganized Mexican standards, like tamales made with tofu and sunflower seeds or seitan-based faux chicken with mole.

When Mr. Natural first opened in 1988, the family-owned all-vegetarian business had many food items made with cheese or honey. Now, the bakery section is 100 percent vegan, and all food items can be modified for vegans. For example, at breakfast time, you can order traditional migas with cheese and eggs, or the tofu scramble and nut-cheese version.

But, perhaps what’s always been my magnet is the panaderia section. We’re talking traditional Mexican bakery items like wedding cake cookies, empanadas de camote (sweet potato turnovers), and marranitos (piggy-shaped gingerbread cookies) just like the kind I used to eat in Mexico City. Except that these have no trace of animal products.

Plus, the bakery is increasingly making their delicacies like brownies, dark chocolate muffins, carrot cake, and coconut cake in gluten-free options.  And while I follow a low-glycemic diet, their items are not overly sweet, and they have been incorporating agave, a low-glycemic sweetener, into their family recipes.

In case it wasn’t obvious, Mr. Natural makes everything in-house.

When I first started driving in to Austin, my favorite Juiceland was on Barton Springs, a few blocks west of Lamar. Now, there are 27 locations. Extra nice for me, there is an outlet inside Austin Bergstrom Airport. Even nicer, one of the newer builds is in Belterra, where I often teach yoga or have private clients.

Maybe it’s because I’m a regular, but I say the Belterra staff is amazing. The owner/manager greets everyone like they’re his besties. Another loyal employee whips me up her own off-the-menu hot drink creation.  Delicious, and healthy. Like everything they make and serve.

Don’t let the name fool you. As someone who’s avoided high-glycemic foods (that means most fruit) for ten years, I avoid juices and smoothies. However, they have great shots that are spicy or tart and feel as if they are burning away any bacteria or viruses.

My favorite is Hot Shot or Dr. Doctor, the latter of which is a one- or two-ounce booster made with lemon, beet, ginger, garlic, cilantro, jalapeño, turmeric, oreganol, and habanero. Hot Shot is similar but has turmeric, apple cider vinegar and other power additives.

One of the prior menu items, not on the menu board, they can still whip up is Cauliflower Power, a keto-friendly low glycemic smoothie thickened not with sugary bananas but, you guessed it. Cauliflower.

But I usually want to eat versus drink here. That’s why I’m a fan of the pre-prepared gluten-free Double Rainbow Quinoa Salad, the Beyond Burrito, and the agave-sweetened Mannawich.

For Texans in the other big cities, there are several Juicelands in Dallas and Houston. But home is Austin.

My other go-to in Austin is Wheatsville Food Co-op.

Similar to Mr. Natural, the health food grocery store had an excellent hot and cold food bar until Coronavirus health rules nixed that. Now, you order your plant-based favorites from the deli or find them pre-packaged. One of the most popular items is their popcorn tofu, and that can be eaten as is, with their cashew tamari dressing, or in sandwiches. Other favorites of mine are the African Peanut Soup and the Tofu Curry, both found in the coolers now.

Of course, there are tons of vegan and vegetarian items in the grocery area that I stock up on while I’m there.  For example, This Dip Is Nuts is a plant-based cheesey dip that can be used in cooking, or as is.  There are several flavors available.

There are two Wheatsville locations. First, there’s one by the University of Texas on North Lamar. The second is on South Lamar, just north of Highway 290.

Whole Foods Market: It all Started in Austin

Finally, it would be amiss to ignore Whole Foods. This is an Austin-based giant. There are six locations from the newest megastore in East Austin to one southwest in Bee Cave.  The flagship store is just west of downtown. It’s on Lamar just north of the river. The more-than-just-a-grocery store is filled with kitchen islands and food court like areas where you can nibble and nosh and all types of food and drink, from special-order vegan pizza to vegan and vegetarian Asian- or Indian-inspired tasty dishes to smoothies.

Plus, when I’m here, I enjoy strolling through the non-food aisles. Whole Foods has a great assortment of natural soaps, bath bombs, and even natural-fiber clothing. Some of my standard yoga wear was bought at Whole Foods. For an earlier article I wrote about Whole Foods, click here.

Since neither Whole Foods nor Wheatsville are strictly vegan and vegetarian retailers, as always, ask about what can be hidden ingredients. For example, Whole Foods offers two types of brussels sprouts in the deli area. One is made with fish sauce.

Comment below on which is your favorite spot for dining in Austin, and read my next article that features newer plant-based eateries.