Soul food. Cake and cookies. Ice cream. Those are foods that seem to soothe kids and adults. Unless you need a vegan-friendly version. Then, you can be in a quandary, asking, “Is there butter in here? Eggs? Milk? Or, God-forbid, lard?”

I grew up with zero options for plant-based treats. Nowadays, there are outstanding choices, especially for Austinites.

In the last few years, the Austin vegan-friendly scene has multiplied. Following is a rundown of just a few new-ish healthy alternatives to answer your cravings.

Rhonda Baird is an artist. She earned an undergrad in painting and drawing, and a masters in sculpture and jewelry. As a result, Lovejoy treats are intricate works of art.

“Art has always been a passion, and I think it’s just a natural progression to apply the techniques and philosophies I studied to the food I create. Frosting and decoration are my rewards for completing all the math and science involved in baking. Seriously though, baking is definitely a science and an art.”

In addition to being an artist, Rhonda is a chef who trained at The Natural Epicurean culinary school. Along the way, she learned about Ayurvedic cooking and other healthier modes of food prep as opposed to the more butter, sugar, and salt the better.

“I’ve always been health-conscious. I became a vegetarian during my 20’s. About six and a half years ago, I decided to go vegan. I was ready for all aspects of my life to align: health, ethics, and morals. Living in Austin made it easy because it is a great city to be vegan. We have a huge vegan community, great food, and awesome events that make it accessible and accepted.”

Although her training and initial interest were in the savory heartier style of cooking, she morphed into indulgent goodies and it felt right.

“Baking makes me happy, so I decided to keep baking. I found that people were much more open to vegan desserts and began my mission to convert people, one baked treat at a time,” she says. 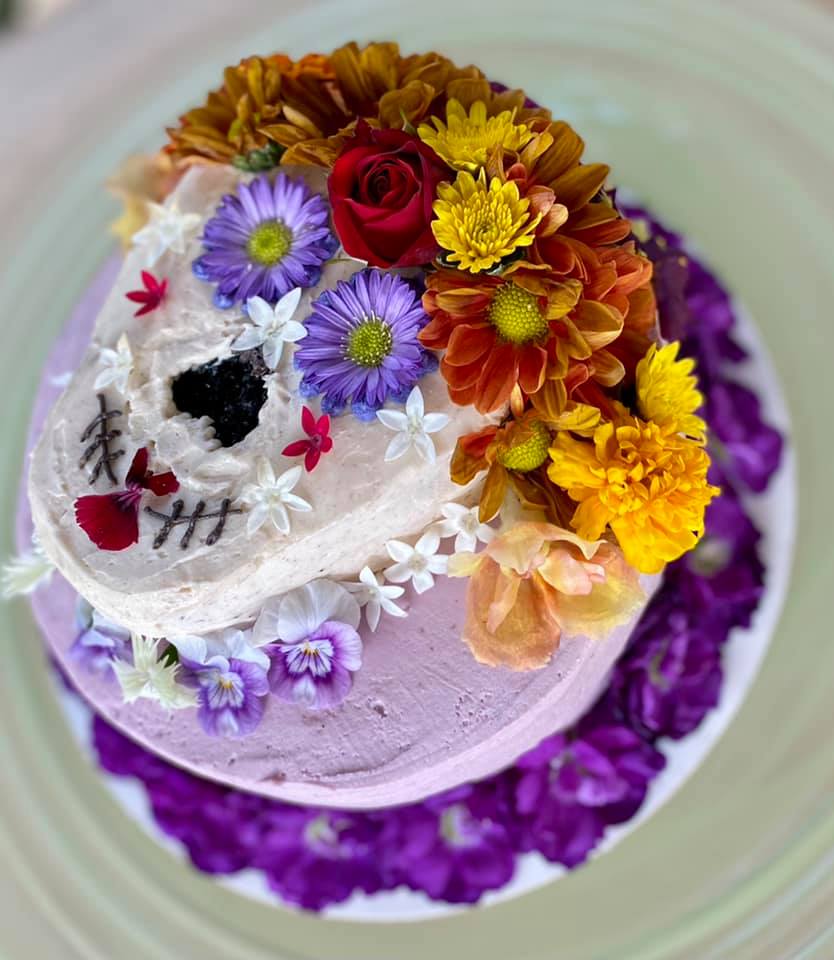 Rhonda operates LoveJoy, which is a family name, from her East Austin home. She’s a vendor for the Wandering Vegan Market but much of her business is via special order.

“I offer a new approach to how cakes taste and look. My training as a health-conscious chef led me to use different herbs, spices, fruits, and vegetables in unique ways. I prefer to use flowers and herbs to decorate instead of frosting. My baked goods are small batch and artisanal. The great thing about Austin is there is room for everyone to create what they are best at doing.”

Her offerings are 100 percent vegan, and many of her delicacies are gluten-free. Rhonda makes her own gluten-free base for cookies and pie-crusts. Lovejoy muffins are spelt-based. Organic unbleached flour makes for fluffier cakes and cupcakes which are her bestsellers. She says they bring love and joy to the consumer.

“Ultimately, I want them to feel special. I want to create a beautiful cake hug!”

Top it off with Nada Moo! Ice Cream 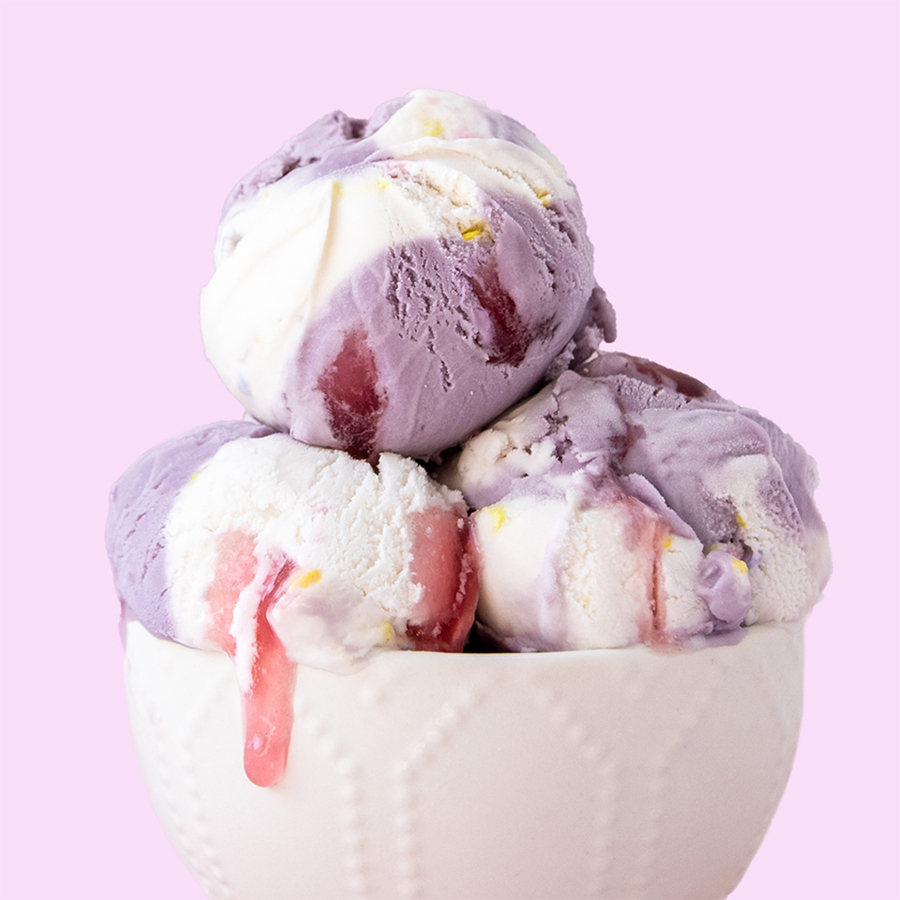 NadaMoo! vegan ice cream is available in most grocery stores in Austin, and thousands across North America. But the family-owned Austin-based business launched their first scoop shop in 2018 on South Lamar.

The ice cream parlor has more than a dozen mouth-watering flavors like peach cobbler, marshmallow stardust, or caramel cold brew and cookies, along with favorites like organic vanilla, organic chocolate, or organic chocolate mint.

You can pick out a cone or cup, or purchase pints from the coolers. Additionally, the staff can whip you up all sorts of shakes and floats. Some are mixed with soda, coffee, or espresso. Others, add in cereal crunchies, sprinkles, chocolate chips, or cookies. All are vegan and gluten-free, even the cookie dough.

“It is our aim to penetrate every household as a solid option for ice cream lovers of all generations who are simply looking to do better for themselves and their families and the planet when they decide to indulge in ice cream,” says NadaMoo! President and CEO, Daniel Nicholson.

NadaMoo! looks and tastes just like the dairy version. It’s rich and creamy because coconut milk has a saturated fat content similar to that of cow’s milk, but without the negative side effects to one’s health, or the environment.  Another plus, the sugar content is lower than most frozen desserts, because pure agave syrup is part of the winning recipe.

Vegans typically stay clear of Soul Food, as animal fats and flesh seem to make their way into most of the dishes. That’s where Sassy’s Vegetarian Soul Food hits the mark. You can order anything off the menu, without thinking twice.

Sassy’s serves Soul Food from a trailer at 1403 E 7th Street minus the high levels of cholesterol, sodium, or saturated fat, but chock full of flavor.

Owner, Andrea Dawson stopped eating animal products for digestive health reasons. But, she didn’t want to give up her taste for Soul Food. She searched for vegan Soul dining in Austin and came up empty-handed. Not to be discouraged, she chose to stir up her own creations. She found a retiring food truck, bought it, and began serving up the food was craving.

She says most of the items on her menu mimic the taste of her family dishes, but without the meat or pork products.

Although one guest said she wanted to eat everything on the menu, the best seller is Chicon and Waffles. Chicon (the street where her trailer first was parked) is a chicken-flavored seitan. It’s such a filling dish that people order it any time of day. The waffles are egg-less, which can be a treat for those who love their waffles, but who are nixing the eggs.

Sassy’s has standards like black-eyed-peas and cornbread. Collards, cabbage, and kale. The baked sweet potatoes are smothered in vegan butter. There’s even creamy Cajun Mac and cheese with sausage. But, the cheese is nut-based and the sausage is plant-based.

“I have lots of regulars that have been here from the very beginning and have seen how the menu has evolved. Young people who want to eat a healthier alternative than their parents. Older adults who are now being told to modify their diets. And lifelong vegans looking to vary their choices,” she adds.

Due to Covid, Sassy’s is open Thursdays through Saturdays, 3 to 8 p.m. The food truck has a six-foot space at the order window separating the staff from the customer.  There are outdoor eating areas within the yard.

Read about my long-time favorite plant-based Austin options on my prior post.