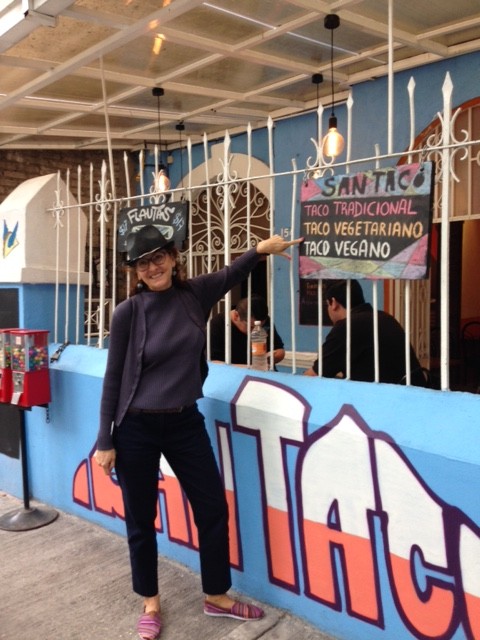 Mexico, yoga, and vegetarianism are probably three things in my life that I’m most passionate about.  The link between vegetarianism and yoga should be obvious (read my other blogs on ahimsa), but I opted for a cruelty-free diet when I was only 16 years old, a few years before my yoga journey began.

I have practiced yoga in Mexico for decades, earned my teacher training certificate in Mexico, and have led therapeutic yoga workshops in Mexico. I feel a very deep connection to yoga and spirituality when I’m in the land of the Maya and Aztecs.

So what’s the link between giving up meat and Mexico? I became a vegetarian in Mexico City 40 years ago. I often opted for atole in the morning, maybe quesadillas con rajas at lunchtime, and mole for dinner as a treat.

This year’s Thanksgiving dinner for me was in Mexico City, and I relished flor de calabaza quesadillas, my all-time favorite.

Over the years, I’ve gotten stricter with my diet. As is the norm among vegetarians in India, I don’t touch eggs. For many years, I had a distaste for them. I don’t eat anything white, except an occasional tofu dish. Dairy is off-limits, as are simple carbs. Stateside, about the only thing I’ll order in a Mexican restaurant, is guacamole with corn tortillas. But in Mexico, there are always great choices for vegetarians, and even vegans, as long as you aren’t looking for a fancy six-course meal, which I don’t condone, ever.

Traditional Mexican restaurants will often have nopales, flor de calabaza, huitlacoche or champiñones as part of their offerings, and of course, rice, beans, and tortillas are good protein sources for those that eat them.

While being vegetarian in Mexico City isn’t like Austin or Southern California where vegetarian, vegan, or gluten-free options are frequently noted on the menu, I’ve found it usually easy to request no meat, dairy, sugar, or wheat.

However, watch out for hidden animal products.  Ask if the beans are made with lard, or if the rice, or mole, is made with chicken stock, Maggi, or Knorr. And stress no cheese on anything, as white cheese crumbles commonly adorn vegetable dishes.

Speaking of cheese, I’m big on quesadillas from street vendors. Although quesadillas may connote they’re made with cheese, there are dozens of options for quesadillas, many of which are vegan. I love street food, in part, because I can see what I’m going to eat, and how it’s being prepared.

The street-side braseros have always been a favorite for me.  I like to see what my food looks like before it’s hidden by the tortilla or masa. One morning, I found a very clean stand with two women patting tlacoyos and quesadillas into shape.  When I inquired about animal-product-free choices, they named too many for me to remember. They prepared me a tlacoyo filled with pureed fava beans and topped with nopales. As that was being cooked, they made me a quesadilla filled with red peppers and spinach. It may have been my favorite meal during this trip, and only cost 26 pesos (about $1.50).

Other made-to-order street-side favorites are fresh coconuts, fruit cups, or jugos. I found juicing kiosks everywhere on my last trip to Mexico City. The most common green drink recipe was celery, parsley, nopales and grapefruit. One added chia. Another, sprouts. All are made on the spot, so you can control exactly what goes in, and how much of each ingredient.

If street food isn’t your cup of tea, special order wherever you go. Just be sure you have a good command of the language or a translator.  Villa Maria, for example, is a large established Mexican restaurant in the Polanco neighborhood. The menu has a number of salads that are vegetarian and gluten-free. Among the botanas are several vegetarian options.

Of course, there are plenty of Asian bistros where meatless meals are easy to find. Plus, there are falafel fast food places sprouting up throughout the city.

El Rey del Falafel is both vegan and kosher/parve. Since kosher rules don’t allow the mixing of meat and dairy, parve means neither milk nor meat-based foods.

A vegan or vegetarian diet often goes far beyond ahimsa. It can be a moral, political or health-conscious affirmation, as well. For some people, whether they are kosher, or vegetarian/vegan, they want to avoid cross-contamination and prefer separate grills and utensils for meat and dairy. That’s just one reason why many vegans prefer to frequent vegan establishments so that you know that no pepperoni or cheese will fall into your salad and that the cutting board and knife have not been slicing ham or chorizo.

Olga Lisbona is the owner of La Maison Organique in the trendy Condesa neighborhood. She became a vegan after she learned about the treatment of dairy animals and chickens, and the negative impact on our health. Her personal commitment to a chemical- and pesticide-free plant-based diet led her to open La Maison as a vegan restaurant and boutique.

“I think that Mexico is still a difficult place for vegans,” she said. “Most restaurants have vegetarian options,” she acknowledges.  For vegans, choices are more limited, and she feels vegan restaurants are the best bet. “Besides our concern for good flavor, we add the best ingredients to our juices, smoothies, and dishes, such as superfoods that have a positive impact on maintaining health and staving off illnesses for those with a vegan diet.”

La Maison’s clientele is a mix of strict vegans and those that may be a bit uncomfortable pouring coconut or almond milk in their coffee. “I think there’s still a lot more to do in the area of education and consciousness. It can be hard for people to change their habits.”

Forever Vegano is another vegan spot, on the other side of Insurgentes, in Colonia Roma. Forever serves breakfast, lunch, and dinner. Their caffeine-free chai was delicious, as was the oatmeal made with quinoa. They have several soups, salads and  desserts and make their own plant-based cheeses and faux meats.  The menu has standard Mexican and American fare like a Reuben sandwich or mac and cheese. Some of the dishes are flavored with a bit of an Indian or Asian flair, as seen in their Baja Califlower tacos or Quinoameshi bowl made with soy sauce, peanuts, and ginger.