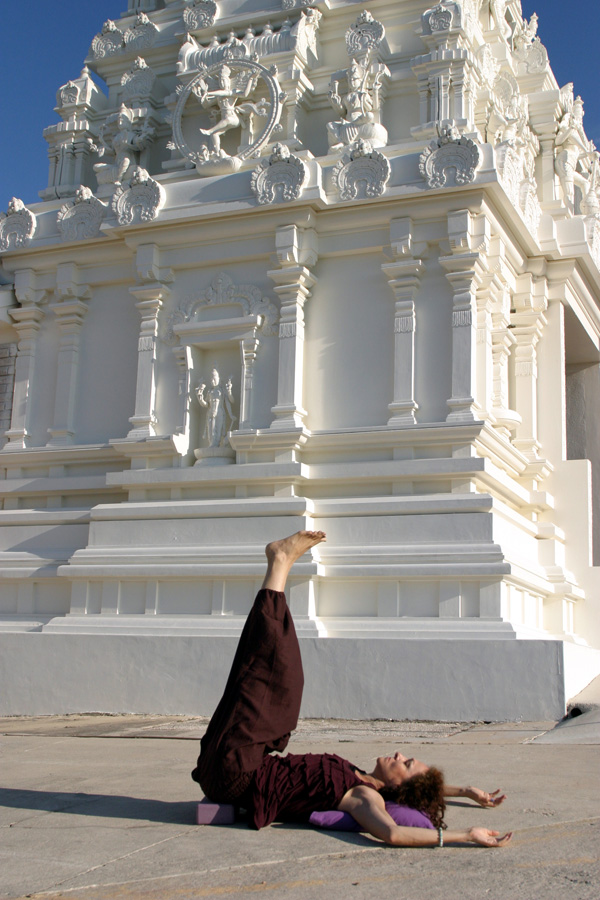 One of the principle theories in Yin Yoga is to relax the muscles and allow the bones to support you.

For some, traditional legs up a wall causes minimal to significant tension in the abs and the hamstrings. To avoid those discomforts and simply relax into the pose, letting the legs literally rest against the wall eliminates any “work” for the abs and hamstrings.

Legs up a wall is a great inversion. While most inversions are contraindicated for people with uncontrolled high blood pressure, this one is a good choice as the head does not hang below the heart, and one still gets the increase in circulation. As a result, with the legs propped against a wall, most anyone can be comfortable for extended periods in this pose.

“Mr. Iyengar also encouraged us to stay in inversions for longer periods of time, according to our ability,” says Judith Hanson Lasater the mother of Restorative Yoga. A physical therapist, she studied directly with Iyengar.

I tend to do this pose toward the end of the class. Since this is a supine pose, pregnant women will need to place a large bolster under their head and spine. Others may enjoy placing a small cushion under their head and/or hips. This is so restful, that I like to use this sometimes before savasana.

“From an Eastern philosophical viewpoint, inversions are thought to effect the different Pranas in the body, especially Apana and Prana. Prana in the chest is very dominant during the day, when we’re upright all the time. When we turn upside down, we give prominence to Apana, the introspective, archetypal feminine, internalizing energy,” adds Lasater.

For more about benefits of Yin Yoga or Restorative Yoga, visit my blog spot, www.TheNamasteCounsel.com/yoga-blog. As always, consult your yoga therapist to determine which poses are best suited for your particular physical and emotional needs.