“Weapons of Mass Destruction” at the Mall or Big Box Store

Most of us have two-car garages, fenced-in yards big enough for Fido and Rover to run around for hours while their masters sit in a huge recliner engrossed in images across a giant plasma display. Many of us have spare rooms, and even storage units (some air-conditioned), to house what we want but rarely use, or need.  We over accumulate, possibly to fill other voids.

George Carlin got plenty of laughs when he said, “A house is just a place to keep your stuff while you go out and get more stuff. That’s the whole meaning of life. Trying to find a place for your stuff.” 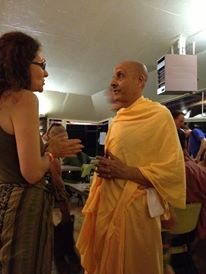 “We’re obsessed with things money can buy,” said Radhanath Swami, author of the book and soon-to-be-released feature film, “The Journey Home,” and spiritual leader for the International Society for Krishna Consciousness (ISKCON).

Radhanath Swami’s personal tale reads like a cross between “Indiana Jones” and “The Little Buddha.”  He was raised in a traditional middle-class family, and during his first summer break from college in the ‘60s, he went hitchhiking across Europe, penniless.  He never returned to college, but he learned more than what most students ever absorb from books and professors.

He listened to his heart, and trekked to India, crossing through war-torn and disease-infested regions. At one point the only item of any relative value he had was a harmonica, and he threw it into the Ganges river.  Still just a kid, he realized he had to give up material attachments to find true spirituality.

“We are being bombarded by weapons of mass destruction,” he told an audience recently, referring to materialism.

Now in his 60’s, the spiritual master frequently lectures around the world, sharing the wisdom he gained from his guru and his personal experiences. “When I was a boy, for my mother’s birthday, I would steal a flower from her garden, and she would cry of happiness. Each time, she’d say, ‘it’s the thought that counts.’ It’s the thought of love that gives value.”

Hunger of the Heart

At a recent gathering, he shared the following anecdote. “A billionaire in Chicago said, ‘Money cannot buy peace. Money cannot buy a good family. Money cannot buy inner fulfillment.  Money cannot buy love.’ This is the real wealth.” Radhanath Swami referred to Mother Theresa’s take on what’s missing for many. “The greatest problem is hunger of the heart.” He then stated, “The heart is only satisfied by giving and receiving love.”

Not unlike Mother Theresa, Radhanath Swami travels tirelessly around the world to feed hungry hearts and bellies.  He helped establish a 500-bed hospital for the poor in Bombay, India, and under his leadership, ISKCON now serves 260,000 mid-day meals, daily, to the underprivileged in Bombay. In September 2013, at BhaktiFest, he was named Humanitarian of the Year.

Radhanath Swami attributes much of his practice and leadership to his spiritual master, Srila Prabhupada. “Prabhupada taught me a simple principle,” he acknowledged. “The greatest joy is to be an instrument of God’s love, to everyone we meet. We can change the world.” According to the “Bhagavad Gita,” he added, “true knowledge is to see every living being with equal compassion. Whether a human, a cow, a dog, or a cat.”

Read more about ISKCON in Bombay in my latter blog posts.